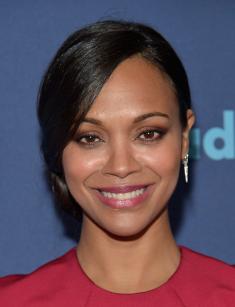 Zoe Saldana is an American actress who earned her fame for the roles of Uhura in the remake blockbuster Star Trek and green-skinned Gamora the Marvel fantastic action movie Guardians of the Galaxy.

Zoe Yadira Saldaña Nazario was born in New Jersey. The girl’s ethnicity was mixed: the father, Aridio Saldaña, migrated from the Dominican Republic, and the mother, Asalia Nazario, came from Puerto Rico. Besides, Zoe has Native American, Jamaican, and Lebanese roots. Zoe has two sisters, Cisley and Mariel, and a stepbrother, Nipo, who became a famous Dominican producer.

The family spent several years in Jackson Heights, New York. In 1987, when Zoe was nine, her father died in a car crash; Asalia and the kids moved to her husband’s relatives in the Dominican Republic and lived there until the girls graduated from school. Further on, the family returned to the United States.

The young woman took an interest in dancing in the Dominican Republic and joined the ECOS Espacio de Danza Academy where she studied various choreographic styles; she preferred classical ballet. When Zoe came back to New York, she started her professional career as a dancer: the 17-year-old woman performed with the Faces troupe in Brooklyn; she also played in the New York Youth Theater. This is where acting agency representatives noticed her and invited the young talent to auditions for movies.

Saldana debuted in cinematography in 2000 when she participated in the teen drama Center Stage and personified a beginning ballet dancer. The episodic role in the melodrama Get Over It, the romantic comedy Crossroads with Britney Spears and Taryn Manning, and the musical about sports and dancing Drumline followed.

The adventure action movie Pirates of the Caribbean: The Curse of the Black Pearl was the first significant project for Zoe; she personified Captain Jack Sparrow’s ex-lover. In 2004, the crime drama Haven with Orlando Bloom and Steven Spielberg’s tragicomedy The Terminal came out. The same year, the actress appeared in an episode of the series Law & Order: Special Victims Unit.

In 2005, Saldana gained one of the lead roles in the social comedy Guess Who and was nominated for Teen Choice and Black Reel Awards. The further projects were not much notable, though: Constellation, Premium, The Heart Specialist, Blackout, After Sex, The Skeptic, and Vantage Point. Critics’ and movie lovers’ reviews were mostly neutral, if not negative.

The project continued the iconic Star Trek franchise that had lasted for more than 50 years; it was the reboot version with the younger team of space explorers. At the beginning of the story, the antagonist travels in time and changes the past; as a result, the main characters’ lives differ from the original. Chris Pine played Captain Kirk; Zachary Quinto got the part of the captain’s first officer, half-Vulcan Spock.

The same year, the artist appeared as an alien princess Neytiri in another top-grossing work, the fantastic action movie Avatar. Fans believe it is the futuristic adaptation of the legend about Pocahontas. As the story runs, human beings colonize a distant planet rich in natural resources and fight with its inhabitants for the territory. “Pocahontas” and one of the human colonizers try to protect the world.

Soon, Saldana had the lead parts in the thriller Colombiana and the drama The Words; this period was also marked with the secondary roles in the comedies Burning Palms and Death at a Funeral, the actions Takers and The Losers, the crime thriller Out of the Furnace, and the drama Blood Ties.

In 2013, the next reboot version of Star Trek came out. The sequel Star Trek Into Darkness starred Benedict Cumberbatch who played the antagonist, the superhuman Khan. The British actor’s appearance and the reference to the original series and movies brought the project more popularity.

The same year, Saldana gained the role of the green alien Gamora in the comics blockbuster Guardians of the Galaxy based on the popular Marvel comics. The movie shows a group of unsociable outcasts who unite in a galactic prison and unite to save the world. Chris Pratt played the leader of the guardians, the opportunist Peter Quill; Dave Bautista was given the role of Drax the Destroyer. Computer graphics were used to create two other characters, the raccoon genius Rocket and the tree-like creature Groot. Bradley Cooper voiced Rocket; Vin Diesel pronounced the only phrase that Groot uttered. The limited vocabulary allowed the actor to voice Groot in foreign languages as well: one could enjoy Diesel’s work in any country.

In 2014, Zoe Saldana had a short break from fantastic projects and took the lead role in the drama Infinitely Polar Bear.

The woman began to date the actor Keith Britton in 2000; the young people were even engaged. However, they split up in 2011. Bradley Cooper became Zoe’s next boyfriend; they met at the movie set of The Words. The relationship lasted for about a year.

Zoe is actively involved in commercials; she has been the spokesperson for Calvin Klein Envy lingerie line since 2010. Besides, she participates in photo sessions; her pictures in a bikini may be found on covers of Playboy and other men’s magazines, and many fans are looking forward to seeing her naked.

In spring 2013, Zoe met the Italian artist Marco Perego; they married in June, and the man took his wife’s second name. There are three kids in this family: the twins Cy Aridio and Bowie Ezio (born in November 2014) and the youngest child Zen (born in February 2017). As the actress confessed, her weight used to be 183 lbs. (83 kg.) after childbirth, but she managed to come back to her regular shape, 112.44 lbs. (51 kg.); today, she looks sexy and hot.

Zoe Saldana has an official Instagram account and posts pictures and videos from movie sets and social events; there are few personal photos there. More than 5.2 million people follow the actress.

Sometimes, people mistake Saldana for her colleague, Thandie Newton. The actresses did not make any comments about their resemblance. However, one can easily tell them from each other: Thandie’s height is 5.25 feet (160 cm.) while Zoe is taller: 5.58 feet (170 cm.).

The crime drama Live By Night was premiered at the end of 2016; Zoe played one of the main characters, Graciella Corrales. The movie is set in the United States in 1926 when Prohibition took place; it is the story about schemes invented against it.

In May 2017, the sequel Guardians of the Galaxy Vol. 2 came out; Zoe played Gamora once again. The superhero team not only saves the universe but also tries to reveal the identity of Peter Quill’s father. The next year, Gamora appeared in another Marvel movie, Avengers: Infinity War: the Avengers and the Guardians of the Galaxy united their powers to fight the common enemy.

The fantastic movie Avatar 2 is scheduled for 2020; the actress will come back to the role of Princess Neytiri.