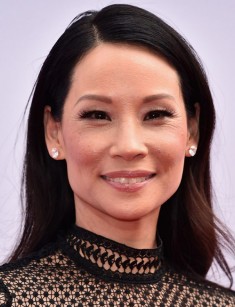 Lucy Liu (the full name is Lucy Alexis Liu) is a Hollywood actress, model, artist, and producer. She has a beautiful and aristocratic appearance, she doesn’t have any Asian stereotypes and works for fourteen hours during the day.

Lucy was born on the 2nd of December, 1968 in New York in quite a low-income family of Chinese immigrants who left their native country to begin the new life in the prosperous USA.

Lucy’s mother, Cecilia Liu was a biochemist by her specialty and came from Beijing. Her father Tom Liu is a builder from Shanghai who had received the education at the university. Lucy is the youngest one of three children in her family. She has an elder brother Alex Liu and a sister Jenny Liu.

The parents had the burning desire to give to their daughter good conditions for the life of the girl in the USA. When the girl turned five years She was sent to the most prestigious specialized New York Stuyvesant High School. In 1986 the girl successfully graduated from the school, took part in the program of cultural exchange in Singapore and entered New York private university.

Her studies at the prestigious higher education institution discouraged the future actress with the sarcastic atmosphere. In a year Lucy transferred to the University of Michigan. Having completed her studies at the University of Michigan with the Bachelor’s degree in Chinese Language and Culture, she additionally got serious preparation in the fields of dancing, stage speech, fine arts, and dramatic arts.

During the last years of studies, Lucy tried herself in cinematography. She took part in the adventurous fairy tale Alice in Wonderland. Being an Asian-American student, in the movie, Lucy easily performed the role of the blue-eyed blonde Alice.

Inspired by her experience and huge success in cinematography Lucy decided to change her lifestyle and to get engaged in the world of professional acting. In the autumn of 1990, the girl told her parents that she was going to move to Los Angeles and to become a professional actress.

Having come to Los Angeles, Lucy started developing her career. She was working as a waitress in the food service, and at the same time, she visited hundreds of castings and auditions. The nationality and eastern appearance didn't allow the girl to get into the movie industry in a short time. The future star was offered only episodic roles and was invited to take part in the TV shows.

In 1991 the spectators could see the beginning actress in the youth TV series Beverly Hills, 90210. Liu performed the role of Courtney.

After insignificant roles in the movies and on the television, in 1998 Lucy received the role in the comedy-drama Ally McBeal directed David E. Kelley. The role of vicious and ill-bred Ling Woo role allowed Lucy to become one of the most well-known Hollywood actresses and to receive Emmy Awards for Best Supporting Actress in 1999.

In 1999 she repeatedly took part in the movies but in major part in the secondary roles. Lucy embodied the character of BDSM-prostitute called Pearl who is connected with the Asian mafia in the thriller Payback. In the fighter True Crime, the actress performed the role of toy shop girl. Moreover, she participated in the comedies Molly, and The Mating Habits of the Earthbound Human and also takes part in the saga Play It to the Bone.

The year 2000 brought more significant roles to Lucy Liu. She performed the part of the kidnapped Princess Pei Pei in the comedy movie Shanghai Noon featuring Jackie Chan and also appeared in the high-grossing thriller under the title Charlie's Angels.

In the latter movie, Lucy performed the role of one of the "angels." Cameron Diaz and Drew Barrymore played the roles of other agents. For the role of Alex, there were considered Beyoncé, Lauryn Hill, Aaliyah, and Victoria Beckham. There is an interesting fact: as a result, the actress Thandie Newton successfully passed the audition but later the actress refused to play the role, and Liu became the third "angel."

There was some unpleasant accident which happened during the work on the movie. During the shootings, the actor Bill Murray was frankly criticizing Lucy's acting. The actress didn't keep silent and answered the famous actor roughly and using bad language. As a result, they quarreled. Sometimes the shootings were stopped for a couple of days so that the actors could calm down.

In 2001 the girl received the invitation to become the official face of Revlon cosmetics brand. Liu accepted this invitation with great pleasure.

The year 2003 became very saturated for the actress. At the beginning of June, there came out the second part of the blockbuster Charlie's Angels: Full Throttle. In autumn there was released the fourth movie directed by Quentin Tarantino under the title Kill Bill: Volume 1. In 2005 Lucy Liu took part in the Canadian trilogy under the title Three Needles and in the fighter Domino based on the real events.

In 2006 the criminal horror movie Lucky Number Slevin with the participation of the actress came out on the screen. In this movie, the actress performed the leading role, and Josh Hartnett, charismatic Bruce Willis, and Oscar-winning Morgan Freeman became her partners on the movie set. Later, the actress appeared in the movies The Year of Getting to Know Us, Rise: Blood Hunter and Code Name: The Cleaner.

Also, the actress appeared in the series Dirty Sexy Money which tells about the story of the wealthy family of Darlings. Lucy performed the role of Nola Lyons with whom one of the clan's successors– Jeremy Darling began to have relations.

In 2011 there came out at once two high-grossing movies with the participation of the actress, including the atypical drama Detachment and a cheerful comedy Someday This Pain Will Be Useful to You. The actress played in the detective TV series Elementary which presents the new version of adventures of Sherlock Holmes at present times. In this series, Lucy plays the role of Joan Watson, the assistant of the famous detective. On the screen, the popular actor Jonny Lee Miller embodied the role of Holmes.

In 2013 Lucy received the invitation to become a member of A.M.P.A.S. - Academy of Motion Picture Arts and Sciences.

In 2016 Lucy voiced-over the character of Master Viper in the third part of the series Kung Fu Panda Holiday.

The journalists repeatedly "married off" Lucy to the various after they had seen the young woman on the joint photos with them. She was told to have a love affair with the financier Noam Gottesman; then she allegedly had relations with George Clooney and director Zach Helm. At the same time, Lucy admits that she isn’t ready for love affairs and creation of the family.

On the 27th August of 2015, she announced the birth of her son who was carried by the substitute mother. The woman called her child Rockwell Lloyd Liu.

After the birth of the child, Lucy became engaged in her mother's cares and began to appear at the secular events less often. But each appearance of Lucy at the events becomes a real sensation. At her age, the actress is fresh and young, and the journalists quite often ask Liu to share her beauty secrets.

In 2016 the actress released the footwear line in collaboration with the Italian designer Bruno Magli. In connection with this event, the woman gave an interview in which she told about her lifestyle and personal care.

Lucy regularly practices running, pilates and drinks a lot of water. The actress doesn't observe any diets. Since childhood, she got used to eating small portions because her family didn't have enough money. That's why at present Lucy prefers healthy food, and she is a vegetarian. The woman is 160 cm tall, and she weighs 53 kilos. In the interviews with the journalists, the actress assures that she hasn't had any plasticity.

The celebrity has one interesting feature in her appearance. Lucy Liu suffers from amblyopia. This is the disorder of sight when one eye is the leading one, and another one is in a relaxed position and mows a little. This may be caused by squint or genetic predisposition and different size of eyeballs. Such persons as Ryan Gosling, Kate Middleton, Blake Lively, and others have such syndrome though this didn't prevent them to gain success.

Lucy isn’t married, she lives with her son in New York and studies different religions: Buddhism, Taoism, and Jewish mysticism. She says that she believes in something that has spiritual origin connected with meditation and Chanting. In young years she was studying Chinese philosophy that's why she considers all metaphysical things to be fascinating.

In 1991 the actress had a mastectomy – the surgery on the removal of the breast cancer. It was a very difficult period in the actress’s life with the long-lasting recovery period.

Since 2004 the actress is a member of Committee of 100 Chinese-American organization. The actress supports the equality of same-sex marriages.

Lucy masterly plays the accordion, she enjoys mountain skiing and rides the horses. Moreover, she is fond of mountain-climbing and Filipino martial arts - Arnis, Eskrima, and Kali.

Thousands of fans on Instagram social network observe life and career of the actress. Lucy regularly shares her personal and professional photos with her fans. Moreover, the actress shares her thoughts with her readers on her microblog on Twitter.

In July of 2017, it became known that the actress would become the director of one episode of the second season of the TV series under the title Luke Cage. Lucy has already tried herself as a director in the projects Elementary and Graceland.

In spring of 2018, the actress attended Obie Awards ceremony in New York. The actress appeared with the blond hair. For the last years, Liu has had cardinal changes in her appearance.

Lucy hasn’t reported yet what has become the reason for such changes. But the public has assumed that she has done this for the future project. Recently the actress received one of the leading roles in the drama comedy Stage Mother where except for Liu there will appear Jacki Weaver and Taye Diggs. It's still not known which character will be performed by Lucy. At present, the movie is in the stage of pre-production. The picture will be premiered in 2019.

In May of 2018, the actress will appear in the character of the Queen in the fantastic movie Future World. According to the plot, the young man who lives in the post-apocalyptic world sets off for dangerous travel to the world of Wasteland to find the medicine for his sick mother.

In June of 2018, the spectators will see the actress in the role of the head-workaholic Kirsten in the comedy under the title Set It Up. According to the plot two assistants performed by Zoey Deutch and Pete Davidson decide to acquaint their intolerable bosses so that they could find love and stop sitting up at work till night and delay their assistants. 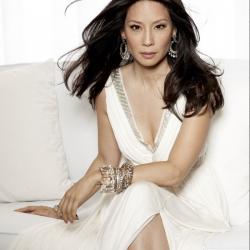