Diana Frances Spencer, Princess of Wales, was born on July 1, 1961, in Norfolk into the English noble family. Her father John Spencer, Viscount Althorp, came from the ancient Spencer-Churchill family; his blood was royal, for Charles II of England, also known as Merry Monarch, was his ancestor. Charles had 14 out-of-wedlock sons who received the title and many children he did not recognize; with all that, there was no successor born by his official wife. However, the king contributed to enlarging the modern noble families of England.

Princess Diana’s dynasty was famous for many outstanding figures including Sir Winston Churchill and Duke of Marlborough. The family’s ancestral home was situated in Westminster, in the center of London.

The would-be Princess’ early life was spotless. She received the primary education in Sandringham where she spent her childhood. The governess Gertrude Allen who had taught the girl’s mother earlier became Lady Di’s first teacher. Later on, Diana went to the Silfield Private School and Riddlesworth Hall School. Diana was not a troublesome kid, although she showed some stubbornness.

Teachers remembered the girl read and painted well; she devoted her pictures to her parents. They divorced when Diana was eight; it was a great shock for the girl. Eventually, Diana stayed with her father, and the mother went to Scotland where she settled with her new husband.

In a while, future Princess of Wales went to West Heath School in Kent. Diana was not the brightest student: sciences were challenging to her, and she even failed exams several times. At that time, she got interested in music and dancing.

In 1977, Diana and Prince Charles met at Althorp; at that time, the future spouses did not pay much attention to each other. In the same year, Diana studied in Switzerland for a while; she missed her home and came back soon. After that, she started working as a kindergarten teacher in the prestigious London area Knightsbridge.

In 1980, Diana got to Prince Charles’s circle. His parents were worried because of the man’s bachelor lifestyle; Elizabeth II was particularly bothered by her son’s affair with Camilla Parker Bowles, the famous married lady. Prince did not even try to veil his relationship. In this context, the royal family including Charles approved Diana as the future wife of Prince. Rumors had it even Camilla supported this decision.

First of all, Prince invited Diana to the royal yacht; later, he invited her to Balmoral Castle to meet the royal family. Charles proposed Diana at Windsor Castle, but this fact was kept secret for some time. On February 24, 1981, the news was officially announced. The famous ring – the sapphire framed by 14 diamonds – became the symbol of the event.

Lady Di became the first English who married the successor of the throne in the last 300 years.

Charles and Diana’s wedding was the costliest wedding ceremony in the history of Great Britain. The celebration took place on July 29, 1981, in St. Paul's Cathedral. Before the ceremony, carriages with the royal family members, Commonwealth regiments, and “the Glass Coach” with Diana and her father paraded London streets.

Prince Charles was wearing the Royal Navy commander parade uniform. Diana was wearing the dress with the eight-meters train; the dress created by young English fashion designers Elizabeth and Emanuel cost £ 9 thousand. The design was kept secret from the media and public; the dress was delivered in a sealed package. Princess also had the family relic tiara.

The wedding was called “magic” and “the ceremony of the century.” According to experts, more than 750 million people watched the wedding broadcast live on major TV channels of the world. After the banquet in Buckingham Palace, the couple went to Broadlands estate by the royal train; later, Charles and Diana went to Gibraltar and started their Mediterranean cruise. Then, another party took place in Scotland; the media were given the permission to take pictures of the newlyweds.

The noble family’s life was not a fairytale. Soon, the public attention was drawn to several scandals involving lovers. There were rumors that Diana knew about Charles’s relationship with Camilla when he proposed to her. Later, it was more and more difficult for Diana to manage her jealousy and save the family’s reputation: Charles did not finish the affair and admitted it publicly. The situation was worsened by the position of Queen Elizabeth II: she supported her son in this conflict. Thus, Diana had to deal with a powerful opponent.

In 1990, Diana’s pregnancy was apparent; and this news spread quickly. At this period, Diana discovered her affair with her James Hewitt, the riding instructor.

In 1995, Diana allegedly met her real life. As she was visiting a friend in a hospital, she met the cardiac surgeon Hasnat Khan. Their feelings were mutual, but the constant public attention did not give the couple any chance to go on, even though Diana fled to Khan’s home country Pakistan. Besides, Khan’s parents did not approve of their son’s status of a Princess’s lover and Diana’s liberating views. These factors probably deprived the people who really loved each other of happiness.

Elizabeth II insisted on the divorce. In 1996, four years after they actually split up, Diana and Charles officially broke up. Two sons were born in this marriage: Prince William of Wales and Prince Harry of Wales.

After the divorce, journalists claimed Diana began the relationship with the movie producer and the son of an Egyptian billionaire Dodi Fayed. Officially, none of Princess’s friends confirmed this affair; the book written by Diana’s butler denies these rumors.

On August 31, 1997, Princess Diana died in a car crash. Lady Di was going to Paris; Dodi Fayed, the bodyguard Trevor Rees-Jones, and the driver Henrys Paul were in the car as well. As the car was moving in the tunnel under Pont de l'Alma, it hit a concrete pillar. The driver and Dodi Fayed died immediately; Princess Diana died two hours later at the Pitié-Salpêtrière Hospital. The bodyguard survived but was severely injured; as a result, he could not remember the moment of the accident.

Diana’s death was shocking to people all over the world. In France, grieving people turned the local spontaneous memorial into the Parisian copy of the Statue of Liberty’s torch.

The funeral ceremony took place on September 6. Lady Di’s grave is located on the solitary island in Althorp, the family’s estate.

There were many versions explaining the accident. Some believed the Princess’s car was trying to pull away from the car with paparazzi; some believed there was a conspiracy against Diana. Even today, there are many speculations and theories regarding this catastrophe.

Ten years later, the Scotland Yard report confirmed the fact that the speed limit was violated and the driver’s blood contained alcohol three times as much from the norm.

British people genuinely loved Princess Diana and called her Lady Di. Princess did a lot of charity work and donated money to various funds. She was the activist promoting anti-personnel mine ban and helped people financially and morally.

Sir Elton Jon devoted the song “Candle in the Wind” to Diana; Michael Jackson expressed his grief in the song “Privacy” and pondered the constant public attention and rumors that probably contributed to Diana’s death indirectly.

Ten years after Princess’s death, the movie about her last hours came out. Lady Gaga, Depeche Mode, and Akvarium (Aquarium) have devoted songs to her; there are many stamps in Diana’s honor in various countries.

According to the BBC survey, Princess Diana is the most popular figure in the history of Britain; she surpassed other British monarchs. 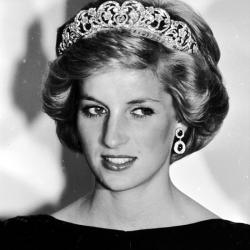