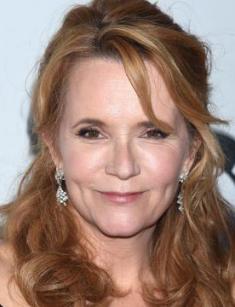 After Back to the Future was released, the beginning actress Lea Thompson was recognized in the street; people asked her for an autograph, and directors showered her with new offers. However, the artist had begun her career earlier and appeared in the horror Jaws 3-D in 1983.

Lea Katherine Thompson was born in Rochester, Minnesota, on May 31, 1961. The girl’s mother, Barbara, was a composer and played the flute and saxophone; the details about the father’s life are unknown. Lea was the youngest among five kids; her elder brother, Andrew, became a ballet dancer. The family had Irish, English, Scottish, German, and Dutch roots.

The would-be celebrity went to the Marshall middle school. She took up dances early and became a professional by 14. Thanks to her natural abilities and hard work, Lea won scholarships in ballet schools: The American Ballet Theatre, the San Francisco Ballet, and the Pennsylvania Ballet. Later, the young woman got hired as a ballet dancer in Minnesota.

At the age of 19, Thompson went to the auditions to the Soviet and American dancer and choreographer Mikhail Nikolayevich Baryshnikov who told her she was too heavyset for ballet. Lea’s dream was broken; she switched to acting and moved to New York.

The young woman worked as a waitress and debuted on television in commercials for Burger King and Twix. In 1982, she voiced Cecily Loper in the detective computer game MysteryDisc: Murder, Anyone?

The cinematographic debut took place in 1983: it was the horror Jaws 3-D by Joe Alves. The same year, the artist received a role in Michael Chapman’s All the Right Moves. Tom Cruise was Thompson’s stage partner. It was one of the projects where the artist appeared naked in front of cameras.

The next year brought the parts of Erica in John Milius’s thriller Red Dawn and Anita in The Wild Life by Art Linson. However, only the role of Lorraine Baines in Robert Zemeckis’s Back to the Future (1985) made the artist famous. She also participated in the second and third parts of the trilogy in 1989 and 1990.

In 1986, one could see Lea as Kathryn in Harry Winer’s SpaceCamp and enjoy her singing in Willard Huyck’s adventure musical comedy Howard the Duck. George Lucas was the executive producer of the latter project; critics appreciated it. In 1987, Thompson’s acting was also noticed: she won the Young Artist Awards for Best Young Actress in a Motion Picture – Drama for the melodrama Some Kind of Wonderful by Howard Deutch.

The artist continued to work on many projects and personified Sybil in Jenny Bowen’s drama The Wizard of Loneliness and Sylvia Vane in the series Tales from the Crypt. The role of Sally in the drama Nightbreaker brought the nomination for the ACE Award. Besides, the actress participated in the family comedy Dennis the Menace (1993) and the family melodrama The Little Rascals (1994).

In 1995-1999, Thompson starred in the melodramatic comedy series Caroline in the City created by Fred Barron, Dottie Dartland, and Marco Pennette. Her character, Caroline Duffy, works as a cartoonist in Manhattan; she does her job, tries to settle her personal life, and faces many comic situations. This project gave the woman the People’s Choice Awards for Favorite Female Performer in a New TV Series.

Further on, Lea had a break in cinematography and paid more attention to Broadway performances. She came back in the drama series For the People (2002-2003) and then participated in the TV movie Stealing Christmas (2003).

Overall, the actress has collaborated with many directors and had 87 roles in movies and series, four directed projects, four producing projects, and one script. Besides, Lea played herself in 47 projects.

In 2014, fans could see their favorite in the 19th season of Dancing with the Stars; Artem Chigvintsev was her partner in the competition.

Just like the majority of her colleagues, Lea does not like to talk about her personal life. However, the paparazzi reveal some facts. In 1980, the actress was dating the American actor Dennis William Quaid, but she fell in love with another man, the director and producer Howard Deutch.

The young people met at a movie set in 1987: Howard was the director of Some Kind of Wonderful, and Thompson personified Amanda Jones there. In 1989, the couple married. In 1992, the husband offered Lea a part in his comedy drama Article 99.

In 1991, the actress’s first child, Madelyn, was born; the youngest daughter, Zoey, was born in 1994. Both girls followed in their parents’ footsteps and devoted their lives to cinematography.

In March 2008, Lea and her daughters performed in the play Bye Bye Birdie; the event was held during the 16th annual Alzheimer’s Association event, “A Night at Sardi’s”.

Nowadays, the actress’s career is fruitful: she participates in two or three projects every year. In 2015, one could see her in the comedy series The Muppets; the dramas The Dog Lover and Stars Are Already Dead.

2017 was marked with the premiere of the comedy drama Literally, Right Before Aaron by Ryan Eggold; Thompson gained the role of Deb. In June, the comedy The Year of Spectacular Men came out. The actress’s daughter, Madelyn Deutch, worked as a screenwriter for this project. Besides, Lea appeared in the family drama Little Women by Clare Niederpruem.

Today, Lea Thompson lives in Los Angeles with her husband and two daughters; they have dogs, fish, horses, hens, a cat, a turtle, and a parrot. The actress often shares the pictures of her pets on Instagram.

The artist is known as a social activist and helps raise awareness of breast cancer; she is also engaged in activities supporting mental health and organizes charity events to fight Alzheimer’s disease.