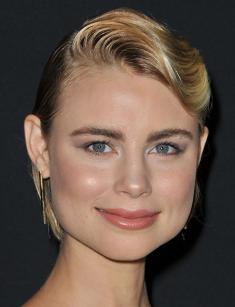 The 25-year-old Australian actress and model Lucy Elizabeth Fry was noticed after the release of the popular youth series H2O: Just Add Water. But the girl became very popular thanks to the fantasy Vampire Academy, in which the Australian TV star played the Princess Vasilisa Dragomir.

The Australian star was born in March 1992 in Queensland. Her childhood and youth in the town of Wooloowin. Lucy Fry's parents had nothing to do with art. They did not prevent their daughter from dreaming of a career as an actress. Lucy's creative biography began on the stage of the Brisbane theater Zen Zen Zo, where the young actress was entrusted with minor roles. Fry realized that it was not enough to go on stage for her promotion.

The blue-eyed blonde took her first steps in the modeling business. Lucy Fry became a participant in the model competition at the age of 15, which was held by the Australian magazine for teenagers Girlfriend. Lucy Fry reached the final and took second place. The slim young beauty, whose height is 5,7 feet (1.76 meters), was noticed by the model agency Chic Management ( Phoebe Tonkin collaborated with him previously) and the model agency Dallys Models.

Soon she had a lot of work in the movie theater. In 2008, Lucy Fry appeared in the adventure tape Fool's Gold, playing an episodic role of a tourist. The directors and agents noticed the performer because Fry starred together with Matthew McConaughey, Kate Hudson and Donald Sutherland in the romantic American tape.

The teen sitcom H2O: Just Add Water was released two years later. Lucy Fry got the role of the second plan. The post-Soviet countries acquired the rights to broadcast the popular series. The model and actress starred in the video of the group Thirsty Merc the same year.

Lucy Fry had success in 2012 when the TV series Lightning Point was released. The movie star made her debut in the title role of the alien Zoey, who arrived on Earth to know her better. The girl Amber (Philippa Coulthard) knew that Zoey was an alien. She helped Zoey and her partner to settle on a strange planet. According to the script of the tape, the heroine of Lucy Fry is a surfer in the series Lightning Point. Therefore, the movie star mastered this unfamiliar sport and she performed all the scenes on the water on her own without the help of a backup.

The movie Mako: Island of Secrets is a spin-off of H2O: Just Add Water. The series was released three years after the first movie. The premiere took place in the summer of 2013 on the American channel Nickelodeon. Australian viewers watched the series on the channel Network 10. Lucy Fry woke up famous in the United States and at home because she got a key role of the mermaid Lyla in the spin-offs.

Three mermaids are in the center of the plot: Lyla (Lucy Fry), Sirena (Amy Ruffle) and Nixie (Ivy Latimer). The mission of mermaids is to guard Mako against outsiders. The leading roles in the youth fantasy were entrusted to Chai Romruen and Dominic Deutscher. Chai Romruen played a newt, Zac Blakely, the mermaid Lyla fell in love with him. The series scored high ratings.

Lucy Fry was chosen for the primary role in the melodrama with elements of fantasy Vampire Academy in the winter of the same year. The 21-year-old Australian TV star got the role of a heroine named Vasilisa "Lissa" Dragomir. Zoey Deutch played a friend and guardian of Lissa, Rosemary (Rose) Hathaway, the daughter of a vampire and an ordinary man. Olga Kurylenko, Danila Kozlovsky appeared in the "vampire" movie. Kozlovsky turned into a dhampir, Rose fell in love with him and Kurylenko played Ellen Kirov. Another star of Vampire Academy is Dominic Sherwood, the audience saw him in the image of Christian Ozera.

Fantasy fans welcomed the first part of the vampire Saga of Richelle Mead warmly, noting the skill of the actors. But the critics gave negative reviews and modest box office forced the producers not to make a sequel.

In 2015, Lucy Fry appeared on the screens in the tape Now Add Honey, where she got the central role. The audience saw the blue-eyed Australian actress in the crime drama The Preppie Connection of Joseph Castello the same year. Lucy played an essential character, Alex Hayes.

She stared in the tragicomedy Mr. Church, on the set of which Lucy Fry met with Eddie Murphy. Fry was approved the role of Marina Oswald in the mystical thriller 11.22.63 by Stephen King the same year. Lucy starred in the tape with James Franco and Chris Cooper. The work of the trio, like the drama itself, was highly appreciated by viewers and movie critics. The mini-series tells the story of a teacher, who made a journey through time to prevent the murder of John Kennedy.

In May 2016, the premiere of the horror tape The Darkness took place. Lucy Fry got the role of the daughter of the protagonist Kevin Bacon. Viewers saw a movie star in the Australian TV series Wolf Creek the same year. The heroine of Fry, a19-year-old tourist Eve managed to survive in a fight with a serial maniac and punish him for dozens of bloody crimes. The world premiere of the project took place in the middle of 2016.

People from her native country follow the developments in the career and personal life of the Australian TV star. But the army of fans of the actress expanded beyond Australia. Lucy Fry has more than 100 thousand subscribers on "Instagram."

The stars of Vampire Academy, Lucy Fry and Zoey Deutch met on the set of the tape. They are friends beyond the movie project. Now girls are best friends. They are often seen together at star parties. It's hard to imagine that a beautiful woman like Lucy does not have any boyfriend. But if we assume that the star has a boyfriend, then Fry hides him skillfully. Perhaps we will know the name of her boyfriend soon, who is famous in Hollywood.

In October 2016, it was known that Lucy Fry would appear in the title role of a fantastic action movie Bright of the American director and screenwriter David Ayer. Lucy Fry has a net worth of $3 million.

The premiere of the thriller was announced in December 2017. Will Smith and Noomi Rapace starred together with Lucy. The tape Bright is a police action movie, it is about the world, in which humanity lives with mythical creatures. And the police officer cooperates with a colleague-Orc to defeat a common enemy. The budget of the project is $90 million.