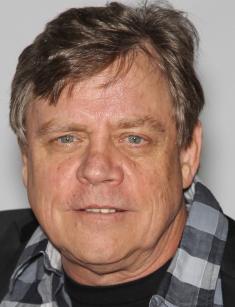 Mark Hamill was born in the town of Oakland, California. His father, William Hamill, was a military pilot and captain. Mother Suzanne Hamill (née Johnson) was a homemaker. Besides Mark, the parents also had two sons, Will and Patrick, and four daughters, Terry, Jeanie, Jan, and Kim. Because of the father’s service, the family often moved, so Mark went to school in New York City, in several cities of Virginia, but he graduated from high school in Japan.

Since childhood, the boy loved to be in the spotlight, to amuse classmates and relatives. When he was six years old, Mark was fascinated with the theater and cinema. He even participated in the audition in Japan but was not cast in the film. He first appeared on the school stage at the age of 12, when one of the actors fell ill, and Mark Hamill was offered to replace him. The young debutant came on the stage, improvised without knowing the text and coped with the task brilliantly.

After graduation from school, the young man entered Los Angeles City College. During his studies, he participated in musical plays and theatrical productions. Hamill did not leave the theater stage when he became a famous screen actor. He starred on Broadway in such performances as The Elephant Man, Amadeus, Harrigan 'N Hart, Room Service, and The Nerd.

In January 1977, being a world famous actor, Mark Hamill was in a terrible car accident because he fell asleep while driving to the place of the filming. The actor's car rolled over on the freeway, and Mark was thrown on the roadside through the windshield. He miraculously survived but underwent a lot of complex facial cosmetic surgeries. For a while, Hamill feared to drive a car but did not stop working on the set.

19-year-old Mark Hamill made his screen debut playing the role of Kent Murray in the TV series General Hospital. Then there were about 20 sitcoms, and soap operas, the most famous of them are The Streets of San Francisco, Room 222 and Sarah T. – Portrait of a Teenage Alcoholic. In them, he played both leading and minor roles. The man also participated in the sitcom The Bill Cosby Show.

The first role in a full-length film was significant for Mark's career. In 1977, George Lucas invited him to play the leading role of Luke Skywalker in the fantasy blockbuster Star Wars: Episode IV – A New Hope. The success of the film was enormous. For six years, the actor played in two sequels The Empire Strikes Back and Return of the Jedi, as well as in the television film set Star Wars Holiday Special.

Although most viewers associate Hamill only with the role of Skywalker, he played quite a lot of different characters. The actor starred in the adventure movie Corvette Summer, the war drama The Big Red One, the musical drama The Night the Lights Went Out in Georgia, the fantasy thriller Slipstream, the horror film Midnight Ride, the science fiction film The Guyver, the mystical melodrama Black Magic Woman, the thriller Village of the Damned, the fantasy film Time Runner, the comedy The Raffle.

In these movies, Mark Hamill played both positive and negative roles, acted as a dramatic and comedy actor. In the new millennium, he played the secondary part of Cocknocker in the youth comedy Jay and Silent Bob Strike Back, professor James Arnold in the spy action movie Kingsman: The Secret Service, and the father of the title character in the drama Thank You, Good Night.

Hamill’s latest film is the sequel to the famous saga, Star Wars: The Force Awakens, in which he returned to his most famous role of Luke Skywalker.

In 1977, Mark Hamill met dentist Marilou York in Los Angeles. They began a romantic relationship and were going to marry, but the popularity of the actor almost disturbed these plans. The couple did not date for a while, but in December 1978, Mark and Marilou married.

A year later, the couple had a son, Nathan Elias, in 1983, the second son, Griffin Tobias, and in 1989, a daughter, Chelsea Elizabeth. It is interesting that all the children were born in different countries since the wife went together with Mark on tour even when she was pregnant. Now the large family lives in their own home in Malibu. Mark Hamill bought it in 1977when he made the first big money.

The actor's hobby is voicing of cartoon characters. Nowadays, he has more than 200 voice roles, the most famous of them are The Joker in Batman: The Animated Series, Maximus in Fantastic Four, and Moth in SpongeBob SquarePants. When Origin released the Wing Commander series of computer games, Hamill was also cast as the series hero in 1996.