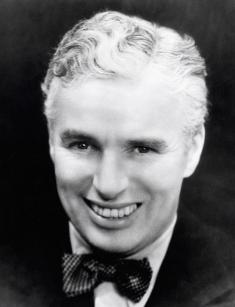 Sir Charles Spencer Chaplin is better known to us as Charlie Chaplin, was born in April 1889. He was the first common child in the family of pop actors of the London music hall. Hannah gave birth to her first son, Sidney Hill before marrying Charlie's father, Charles Spencer Chaplin. But Sidney Hill received a surname Chaplin as his half-brother Charlie after marriage.

The early childhood of Charlie and his brother was happy. Their father was extremely popular. He had a pleasant baritone, he was regularly invited to London's music halls and toured Europe a lot. But soon the existing problem with alcohol worsened and 37-year-old Chaplin died in a hospital in London.

Charlie's widowed mother continued to perform in the music hall but she began to have problems with her larynx. Once 5-year-old Charlie Chaplin, whom his mother always took with her, had to replace his mother. The boy came on stage and began to sing when she could not sing her song.

The audience gave him coins and small bills. Charlie raised money and only then continued to sing. Probably, the creative biography of Charlie Chaplin began at that time.

Then his childhood ended too. Hannah was no longer able to perform. And soon his mother lost her mind when the boy was seven years old and she was taken in a psychiatric hospital. Charlie and Sidney were in an orphanage. At the age of 9, Charlie Chaplin was admitted to the dance group the Eight Lancashire Lads. He first made the audience laugh here, depicting a cat on a Christmas pantomime in 1900.

But Charlie left the band a year later. He had to earn a living and just did not have time to study and attend school. Charlie Chaplin worked wherever he was taken. He sold newspapers, helped nurses in the hospital, worked in the printing house.

At the age of 14, Chaplin's dream came true: Charlie was hired for a permanent job in the theater and received the role of a messenger in the production of "Sherlock Holmes." It is noteworthy that the teenager was illiterate. Therefore, his brother helped him to learn the role.

In 1908, 19-year-old Charlie Chaplin joined Fred Karno's prestigious comedy company, where pantomimes and sketches were prepared for English music halls. The young man became a key actor in most performances. Karno`s troupe went on tour in America after two years. Then Charlie Chaplin decided to stay in the United States.

One day, Chaplin saw Mack Sennett`s performance. The American film producer liked his game so much that he invited the artist to work in his studio. In September 1913, Charlie Chaplin signed a contract. The studio was obliged to pay him $150 a week.

Things weren't going well for the first time. Sennett even wanted to fire Charlie Chaplin. He considered his decision wrong. But the Englishman became the main actor a year later. The audience liked this rough hero of impromptu of Mack Sennett. But they liked the artist more when Charlie backtracked from the image, invented by Sennett. When Chaplin brought more humanity and lyricism to the game, the audience welcomed the hero more warmly.

One day, Sennett asked Charlie Chaplin to do a new makeup for the comedy Kid Auto Races at Venice. Then the artist came up with his original image, which is now familiar to all of us. This image included wide pants, too tight jacket (his business card), a small bowler hat, huge shoes, dressed on the wrong foot, and a mustache.

The new image was created. The cane appeared in the image of Charlie over time. He saw it in one of the photos of his father. The actor became mega-popular. But when Charlie Chaplin succeeded, he began to understand that he could be a more successful writer and director than those, who managed him.

In 1914, Chaplin's first film called Caught in the Rain was released. Charlie acted not only as an actor but also as a director and screenwriter for the first time. Unlike Keystone Studios, which Chaplin leaves, the Essanay Film Manufacturing Company paid the artist $1250 per week and 10 thousand for the contract.

In 1916-17, another company paid for the work of a comedian even better: 10 thousand dollars a week and 150 thousand for the contract. In 1917, Charlie Chaplin signed a contract of 1 million dollars with the First National Pictures and became the most expensive actor of his time.

In 1919, Chaplin had his own United Artists Entertainment LLC. Charlie Chaplin worked at this studio until the early 1950s, when he was forced to leave America forever. The most popular movies, which were made by Charlie Chaplin were a feature film A Woman of Paris: A Drama of Fate, The Gold Rush, City Lights and Modern Times.

The movie A Woman of Paris: The audience did not warmly welcome a Drama of Fate. It was a psychological drama, where Chaplin appeared only in the episodic role.

But critics highly praised the work of Charlie Chaplin, recognizing his talent of the author. The Gold Rush and The Circus, which were released in the mid and late 1920s, were more warmly received and are considered classics of the cinema.

He was met by huge crowds of fans when Chaplin came to his native London in the 1920s and then to Paris. The second trip to Europe took place in the 1930s. Charlie Chaplin brought his new movies City Lights and Modern Times.

Charlie Chaplin's debut in sound cinema took place in 1940. It was an anti-Hitler movie The Great Dictator. Besides, it was the last movie, in which Chaplin appeared in the image of The Little Tramp. The persecution of Chaplin began after the release of the film. He is accused of anti-American activities and commitment to Communist ideas. Edgar Hoover, the head of the American FBI, activates the collection of files on Chaplin, that he started in the 1930s.

The peak of persecution was in the 1940s when Charlie Chaplin released his film Monsieur Verdoux. It was banned by censorship. Chaplin was blamed for everything: in ingratitude to the sheltered country (the actor did not take the American citizenship), that he was a secret Communist and a Jew. Nevertheless, the movie Monsieur Verdoux was nominated for Best Original Screenplay.

The artist was expelled from America in 1952 when Chaplin went to London for the premiere of his movie Limelight. Hoover made a ban on immigration on the return of the artist in the United States. Charlie Chaplin settled in the Swiss city of Vevey. Charlie left power of attorney for all his property to his wife, anticipating that he could be expelled from the country. And she sold everything and moved with her children to Switzerland.

Charlie Chaplin continued to create in Switzerland. He wrote music for some of his silent films. He voiced The Gold Rush. In 1948, the artist released the movie the Limelight. In 1954, Chaplin was awarded the International Peace Prize. And in 1957, Charlie Chaplin's film A King in New York was released, where the actor played the main role. Charlie Chaplin had a net worth equal to 800,000 $ at the time of his death in 1977.

He published his memoirs after seven years, which formed the basis of the biographical movie Chaplin, which the audience saw in 1992. The last film of the artist A Countess From Hong Kong was released in 1967. Charlie Chaplin managed to visit the USA again in 1972. He was given a short visa to arrive at the Oscars. It was the second statue Charlie received. Queen Elizabeth II of Great Britain knighted Chaplin after three years.

Charlie Chaplin died on December 25, 1977. He died in his sleep. The actor was buried at the cemetery in Vevey. But in March 1978, his ashes were reburied in another Swiss city Corsier-sur-Vevey after the kidnapping of the coffin for ransom.

Charlie Chaplin's had four marriages and 12 children (one of the children was recognized as non-native by genetic examination). The first wife of the actor was Mildred Harris. The actors lived only two years together. Their firstborn Norman died almost immediately after his birth. Chaplin lived with his second wife, Lita Grey for four years.

Charlie had to take her to Mexico to marry 16-year-old Lita, where their marriage was registered. Their sons Chaplin, Charles Jr. and Sydney Earl were born. The artist paid Lita the huge amount of money as compensation during their divorce process: according to various estimates, from 700 to 850 thousand dollars.

Chaplin lived with his third wife, Paulette Goddard from 1932 to 1940. Paulette married the writer Erich Maria Remarque after their divorce and moving to Switzerland. The fourth wife of the British artist was Oona O'Neill. Their wedding took place in 1943. Oona was 36 years younger than her husband. They lived together until Chaplin's death. Three sons and five daughters were born in this marriage. The last child was born when the comedian was 72 years old.

Charlie Chaplin had a net worth equal to $400 million dollars at the time of his death in 1977.