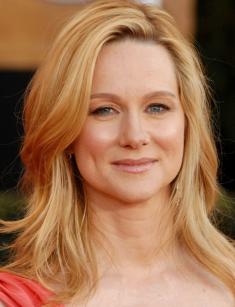 Laura Linney is an American actress who has been nominated for three Academy Awards and won a lot of Golden Globe Awards, Emmy Awards, and the Screen Actors Guild Awards.

Laura Linney was born on February 5, 1964, in New York City. Her mother worked as a nurse at the cancer center; her father was a playwright and professor. Unfortunately, Laura's parents divorced when the girl was small. They had to live in a small one-room apartment due to her mother’s low income.

Laura graduated from high school, and in 1982 she entered the university. A year later, the girl transferred to Brown University, where she earned a Bachelor of Arts degree. At the university, Linney took a great interest in theater and participated in student performances with pleasure. After graduation, Laura decided to continue her education and entered the prestigious Juilliard School in New York City.

Laura Linney made her acting debut in the early 90s. She played bit parts in the films Dave and Lorenzo's Oil. Soon the actress was offered to participate in the series Tales of the City. The project was popular with viewers who began to recognize Laura Linney. Tales of the City was a good start for the actress, and after these movies, Laura received several offers from Hollywood directors. At first, the young woman starred in thrillers. The prominent projects of those years are Congo, Absolute Power, and Primal Fear.

Laura Linney became world-famous when the movie The Truman Show was released. The actress played the wife of the protagonist. Her partner on the set was Jim Carrey. In 2000, Laura Linney starred in the drama You Can Count On Me, but her income was only $10,000. The actress could not believe that she would receive the Academy Award nomination. However, the woman did not win the Oscar.

The same year, the actress appeared in another highly rated drama Maze, in which she played the favorite model of the artist with Tourette syndrome (Rob Morrow). In this film, the sexy actress had to appear in some nude scenes. Soon she played in the mystical thriller The Mothman Prophecies with Richard Gere in the lead role, the pseudo-documentary drama The Laramie Project, and Alan Parker’s detective story The Life of David Gale, in which Laura Linney portrayed the title character, alongside Kevin Spacey and Kate Winslet. Laura played an active member of an advocacy group campaigning against capital punishment, who eventually committed suicide.

The significant project was also Clint Eastwood's detective film Mystic River, for which the actress was nominated for the BAFTA Award. In 2003, she participated in the shooting of the comedy Love Actually. In the film, Laura Linney played the role of Sarah, a girl who lacked confidence and had a mentally ill brother. The film showed ten stories telling about the manifestation of love. Hugh Grant, Keira Knightley, Emma Thompson, Liam Neeson joined the cast. The movie won the recognition of viewers.

Then, the actress appeared in the film Kinsey. For the role, Laura had to eat an incredible amount of donuts and other pastry to gain 19,84 lbs (9 kg). In 2005, the actress was involved in several projects, including The Squid and the Whale, for which she was nominated for Golden Globe Award. The comedy film talks about the divorce of two writers who quarrel for the custody of two sons.

In 2005, the actress starred in the horror film The Exorcism of Emily Rose which told about a sick girl who died during an exorcism ritual. The works of this period also include the drama Driving Lessons and the comedy Man of the Year about the presidential election.

Two years later, Linney was nominated for the Academy Award for her role in the drama The Savages. Laura played the sister of the title character. The same year, the actress joined the cast of the film Breach about FSB agents and the comedy The Nanny Diaries with Scarlett Johansson in the lead role. Laura Linney appeared as a woman without the maternal instinct.

The actress portrayed the wife of the second American president in the 2008 series John Adams. For this work, Laura won several prestigious awards, including the Golden Globe Award.

Her credentials included the second Golden Globe Award after the movie The Big C. The film tells about a woman with cancer, and Laura Linney played the leading role in the series and produced it. The series aired on Showtime for four seasons.

In 2011, Laura Linney appeared the independent comedy The Details, and a year later, she starred in another comedy Hyde Park on Hudson, in which Laura portrayed Margaret Suckley, the beloved woman of Franklin Roosevelt (Bill Murray). Soon, the actress pleased her fans with the appearance in the biographical thriller The Fifth Estate about the life of Julian Assange (Benedict Cumberbatch). The film debuted at the Toronto Film Festival and received mixed reviews from critics and viewers.

In the detective drama Mr. Holmes, Laura Linney played the housekeeper of the retired elderly detective (Ian McKellen), who settled in a private estate and bred bees.

Laura Linney has been married twice. Her first husband was actor David Adkins. The young people got married in 1995, and five years later, they broke up.

For four years there were no changes in Laura's personal life, the actress lived alone and did not start a relationship. But in 2004, she met Marc Schauer who was four years younger than Laura. Marc is a real estate agent, so his career is not connected with the cinema.

They dated for five years and got married on May 2, 2009. Five years later, the couple had a son, Bennett. Now Laura Linney raises the child and considers herself a happy woman. The actress prefers to hide her private life from the public. Laura Linney’s photos appear only on her Instagram fan pages.

Laura Linney has long become the outstanding Hollywood star, so every project with her participation attracts great interest of critics and viewers. In 2016, the biographical drama Genius about American writers was released, in which Laura Linney, Colin Firth, Jude Law, Nicole Kidman played the title characters.

Another significant project with the participation of Laura Linney is the 2016 drama Sully about the feat of pilot Chesley Sullenberger (Tom Hanks), who managed to land an Airbus on the water. The actress played the role of the hero’s wife.

In 2017, talented Laura Linney played a dramatic role in the crime thriller The Dinner, in which Richard Gere became her partner. The same year, Laura was cast in the part of the wife of the protagonist in the crime TV series Ozark. The title character is Marty Byrde (Jason Bateman) who has to start a new life in a new place with family members due to the persecution of the Mexican mafia. In 2017, she also starred in the Broadway revival of The Little Foxes.

Nowadays, Laura Linney has a net worth of $7 million.