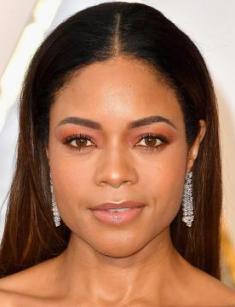 Naomie Melanie Harris is a British actress who gained her fame after the premiere of Pirates of the Caribbean: Dead Man’s Chest.

The would-be actress was born on September 6, 1976, in Islington, London. The mother, Carmen, came from Jamaica and worked as a scriptwriter for the BBC; she contributed to the series EastEnders. The woman had to bring up her daughter alone: the Trinidadian father left the family before the girl was born.

Young Naomie attended the Anna Scher Theater and participated in children’s TV auditions. In 1987, she debuted in the BBC’s series Simon and the Witch and soon received the lead part in the fantastic show The Tomorrow People.

When the young woman graduated from school, she enrolled at Pembroke College, Cambridge to study sociology and politics. However, she realized soon it was a mistake: Harris did not belong to other students and eventually transferred to the Bristol Old Vic, founded by Laurence Olivier. Apart from her classes, Naomie was busy with auditions; she did not miss an opportunity to appear on the screen. One could see her in the movies Living In Hope, Anansi, and the TV series White Teeth.

In 2002, the artist finished the theater school and joined the apocalyptic horror 28 Days Later by Danny Boyle. She personified one of the main characters, Selena. It was a success: the project grossed $82 million worldwide and brought pretty much recognition to the cast: Cillian Murphy, Alex Palmer, and Bindu De Stoppani.

Further on, Naomie played in the family fantastic comedy Dinotopia starring Wentworth Miller, Erik von Detten, Jonathan Hyde, and Georgina Rylance. In 2004, the artist joined the top-grossing action After the Sunset by Brett Ratner; she collaborated with the prominent Hollywood celebrities Pierce Brosnan and Salma Hayek.

Marc Evans’s thriller Trauma gave another lead part to the artist; she played Elisa. One could also enjoy Colin Firth’s, Tommy Flanagan’s, and Mena Suvari’s acting. 2005 was marked with the secondary role in the comedy A Cock and Bull Story by Michael Winterbottom.

In 2006, the actress appeared in one of the most notable projects in her career: the adventure franchise Pirates of the Caribbean by Gore Verbinski. The cast was more than impressive: Johnny Depp, Orlando Bloom, Keira Knightley, Bill Nighy, and Stellan Skarsgård. The first movie brought its creators $1 billion and won several prestigious prizes, including the Academy Awards.

As the story runs, Naomie’s character, the sorceress Tia Dalma, turns out to become the ancient goddess Calypso locked in a human body. The actress appeared in the next movie, Pirates of the Caribbean: At World’s End, as well. She played in Miami Vice by Michael Mann in the interim; Colin Farrell, Jamie Foxx, and Gong Li were her stage partners.

The late 2000s brought many projects: August, Street Kings, Ninja Assassin, Morris: A Life with Bells On. In the British comedy My Last Five Girlfriends (2009), Harris played one of the main characters, Gemma, the girlfriend of Duncan (Brendan Patricks). The next year, fans welcomed the musical drama Sex & Drugs & Rock & Roll about the musician Ian Dury, who created a successful group despite his disability. Naomie personified Denise there.

The famous James Bond franchise did not pass by the actress: in 2012, she played the secretary Eve Moneypenny in Skyfall. One could also see Daniel Craig, Judi Dench, and Javier Bardem in the movie. Harris returned to the same character in 2015 in the next movie about the agent, Specter.

2013 brought the premiere of the biopic Mandela: Long Walk to Freedom. Idris Elba personified the main character, the South-African President Nelson Mandela; Naomie was given the role of the Congress member, politician, and Mandela’s wife Winnie Madikizela. The sports drama Southpaw starring Jake Gyllenhaal as Billy Hope followed in 2015; Naomie played Angela Rivera in this project.

Naomie Harris does not talk about her personal life with journalists. She has no boyfriend or children but hopes that one day she will meet the one.

Judging by Instagram pictures, the actress looks younger than her age. She can boast her impeccable style: fashion lovers gladly discuss her looks when the woman attends social events.

In 2016, the drama Moonlight about the African-American man Chiron Harris was premiered in the United States. Both critics and ordinary viewers loved it: the project grossed $52 million and won many awards. Naomie Harris played the protagonist’s mother Paula and got a nomination for the Academy Awards in 2017.

In spring 2017, the woman was awarded the Order of the British Empire.

The adventure Mowgli: Legend of the Jungle with Matthew Rhys, Christian Bale, Benedict Cumberbatch, and Cate Blanchett and the action Rampage starring Dwayne Johnson are the actress’s most recent movies. The audience will see her on the screen again soon in the spy movie No Time to Die and the series The Third Day.