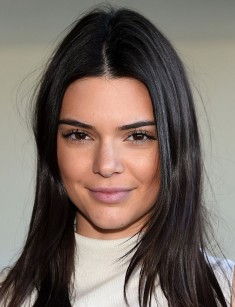 Kendall Jenner is one of the representatives of the star Kardashian-Jenner family. She began her career as a top model at the age of 14.

Kendall was lucky to be born in a family where it's just impossible not to become a star. She used family connections, social position, and her appearance and became one of the most successful models at the age of 19.

Kendall was born on November 3, 1995, in Los Angeles, California. Her mother, Kris Kardashian is a socialite, the owner of a children's boutique Smooch, the creator, and participant of a television talk show dedicated to the life of the Kardashian-Jenner family. Her father, Bruce Jenner is an Olympic gold medal-winning decathlete. In 2015, Kendall's parents divorced, and her father has undergone sex reassignment surgery, becoming Caitlyn Jenner. The girl supported her father in this extraordinary decision.

On her mother's side, Kendall has three elder sisters: Kourtney, Kim, Khloé and a brother Rob. The father of the girl also has children from the last marriage: Burt, Brandon, Brody and Cassandra Jenner. Bruce and Chris have two joint daughters: Kendall and her younger sister, Kylie.

At the age of 12, when Kendall was still a little girl with pigtails, she became a star of a family reality show, where all members of the family participated. Thanks to this show her elder sister Kim became popular. A year later the young star decided to become a model as she had the right appearance for this business. There are early model photos of Kendall and her sister Kylie that show that she is a perfect model.

The girl was tall, slim and pretty. Her rich and famous parents supported their daughter. And now Kendall has a magnificent body and a beautiful breast, which she always demonstrates.

Until 2012, the girl attended one of the private schools in Los Angeles, Sierra Canyon. By this time, photo sessions for glossy magazines had become an important part of her life, and Kendall preferred home education and model career to school lessons. Her younger sister, Kylie also studied at home.

The girls soon appeared on the covers of several magazines, including Teen Vogue and OK !. They worked for famous brands. Later Kendall took part in the advertising campaign of Forever 21 and signed a contract with Wilhelmina Models.

In 2010, for the first time, Kendall Jenner turned into a promising adult model. And at the age of 14, the girl participated in a candid photoshoot almost naked, which made a lot of hype. Then Kendall received invitations to participate in other photo shoots. Paper Magazine wrote about the promising model in the article Beautiful People.

Photos of Kendall appeared in such magazines as Looks, Flavor Magazine, GoGirl, Miss Vogue Australia, Raine. In 2011, editors of the magazine Seventeen named Kendall and Kylie Jenner “The style icons.”

In the role of an "adult" model, Kendall Jenner appeared in the fashion show in New York, where she represented the collection of Marc Jacobs. Then she walked for Chanel and Givenchy in Paris, Giles Deacon - in London. Kendall signed contracts with The Society Management, Elite Paris, and Elite London.

Becoming a star of the world's catwalks, Kendall got acquainted with other models. She went out with the model Gigi Hadid. Kendall and Selena Gomez are also old friends. Later the girl began to appear everywhere with Cara Delevingne, a beautiful girl with blue eyes and bushy eyebrows.

The model was even suspected of being a lesbian, especially after photos of Kendall and Cara kissing. However, these photos were made for Love magazine. The girls tell that they are just friends.

Kendall loves to experiment with her appearance and does it for pleasure rather than for a career. The change of hairstyles will not surprise anyone today, and Instagram star (by the way, Kendall is the most popular model in social networks, and her account collects thousands of "likes" every day) is not an exception.

Fans have already seen her with a fringe and a fashionable haircut, with long flowing and short hair.

The star of the catwalks was repeatedly accused of making a rhinoplasty, although Kendall denies these rumors. However, the photos of the girl before and after the proposed operation show the opposite. At such a young age, the appearance cannot change so radically. Kendall’s younger Kylie also pumped her lips, which, however, does not spoil the young beauty at all.

However, the star decided to shock her fans and posted photos with a child on the Instagram. It was part of the photo shoot for Vogue magazine.

In addition to the career of a top model, Kendall is actively engaged in other projects, trying herself in completely uncharacteristic professions for the fashion world. Together with her sisters and other family members, the girl appeared in the reality show "Keeping up with the Kardashians," as well as in some other television programs.

Together with her beloved sister Kylie, Kendall wrote and published a novel called Rebels: City of Indra. The book wasn’t successful, but it was only first writer's experiment of the famous sisters.

The star also devotes her time to charity. However, the girl has achieved significant results independently. It is a considerable achievement to buy an apartment in Beverly Hills for one and a half million dollars. So, Kendall participated in several charity projects. Since 2013, Jenner has an account at the eBay auction, where she sells her clothes (not cheap), and sends her money to one of the children's hospitals in Los Angeles.

In February 2014, she went charity bowling. The collected money went to the Robin Hood Foundation for support of the poor and homeless. After that, the model participated in the Children in Need campaign by BBC. Together with her colleagues, the girl promoted T-shirts. The money also went to a fund that helps children from poor families.

In 2011, the brand Nicole by OPI released a new line of nail polishes, two colors of which were developed personally by Kendall Jenner: All Kendall-ed up and Kendall on the Katwalk. In a year, Kendall and Kylie started working as designers. They have already developed several collections for the PacSun store under the Kendall & Kylie brand.

In the same year, 2013, the girls released a collection of Metal Haven by Kendall & Kylie for Glamhouse. The famous jeweler helped them, but the sisters created the design themselves. In 2014, the sisters released their shoe collection for MaddenGirl youth line by Steve Madden. Then there was a new collection for Topshop and other interesting projects.

Many fans of the top model are interested in the details of her personal life. In 2012, there were rumors that Kendall has relations with her classmate Julian Brooks because she repeatedly posted joint photos with a guy. In 2013, Kendall was dating Harry Styles. Their relationship lasted for about five months, and then the couple broke up.

There were rumors that the model had relations with Justin Bieber, then - with Cara Delevingne, but they were not confirmed. No one knows with whom Kendall is dating now. There are rumors that the member of the One Direction group, Harry Styles, once again managed to find the path to the heart of the girl, despite her more than a busy schedule. The couple was repeatedly seen together on a yacht and at various parties.

The model admits that her elder sisters Kim and Kourtney Kardashian helped her with their advice very much. They taught the younger sister how to make up, pose, and choose the clothes when she came to the world of fashion. 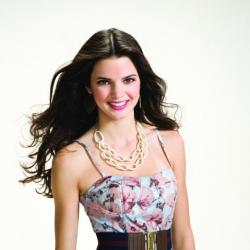