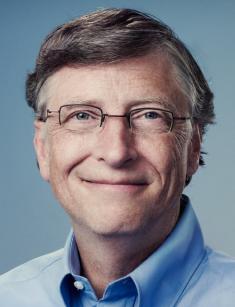 Bill Gates was born in Seattle, Seattle, Washington, U.S., in the family of corporate lawyer William Henry Gates II and Mary Maxwell Gates, who served on the board of directors of several major American companies. Bill was the second child in the family; he has one older sister, Kristi, and a younger sister, Libby.

When the time came for the boy to attend school, his parents enrolled him in the most privileged school in Seattle - the Lakeside School. Bill's favorite subject was programming, to which he devoted almost all his free time. As a teenager, Gates wrote his first game in BASIC. Even though it was a simple tic-tac-toe game, for the boy, they became the starting point in his future professional success.

In the prestigious Lakeside School, the student began to develop programming skills on a minicomputer, but some subjects were difficult for him to master. In particular, the grammar lessons and civics seemed trivial to him, but in mathematics, the future billionaire got only the highest scores. In primary school, Bill did not do very well, and his marks disappointed his parents so much, that they asked for the help of the professionals. The worried parents were forced to send their son to a psychiatrist.

In high school, Bill meets Paul Allen, who later became his main business partner, but in school, the boys had more fun hacking computer programs, not thinking about the strategy of some unique ideas. In 1970 with his school friend Bill wrote the first program to regulate traffic and formed a venture called Traf-O-Data. This project brought the creators $20 000. This success helped the programmers believe in themselves, determining the future strategy of implementing their concepts for many years to come.

In 1971, Bill and Paul even had a brief experience of working for Information Sciences, Inc. The guys wrote a program of payroll but did not have time to finish it, as the project was shut down. Also, as high school students, Gates and Allen worked for TRW Inc., where they wrote part of the energy-grid control software code, which was planned to be used by the employees in Bonneville.

In 1973, Bill Gates enrolled at Harvard College. Of course, he was going to specialize in software, but the practical side of the profession attracted the young man much more than the theoretical, so the unmotivated student missed a lot of classes. After two years of study, the novice programmer was expelled from the University.

In early 1975 Paul Allen found out, that Micro Instrumentation and Telemetry Systems (MITS) released a new generation of microcomputers Altair 8800. Bill Gates was bold enough to call Ed Roberts, who was the head of the company. He told Ed that he and his friend wrote software specifically for the computers of the famous company, and even though his words weren't true, Bill's assertiveness bore fruit. Shortly after their interview at MITS, the best friends became partners with a large company.

The guys had to come up with a name for their company. Initially, they planned to name it "Allen and Gates," but for the high-tech market, such names were not very typical. Then the boys took a look at the name of their employer's company and came up with a phrase Micro-Soft (Microprocessors and Software). In a year, the hyphen from the brand's name disappeared, and in November 1976, the trademark Microsoft was registered.

In 1976, Gates also put into practice the implementation of licenses for their software for direct use by computer manufacturers, which allowed them to "embed" new operating systems and programming languages in the PC. This innovation in marketing significantly increased the revenue of the organization. Soon the company MITS ceased to exist, but Microsoft was able to attract new customers. Apple Corporation, which was founded by Steve Jobs, Commodore International, and also a major computer manufacturer Radioshack became the new partners of Microsoft.

Gates and Allen began to plan the development of an innovative structure for decades to come. At the very beginning, the share or investments was distributed equally. Paul Allen was the investor of only a third of the funding for the common cause, so he owned 36% of the shares, the rest belonged to Bill Gates. The co-founders also saw their place in the company differently. Allen dealt mostly with technical issues, and Gates focused on developing public relations, contracts, and other business contacts.

The company's work resulted in the creation of the Microsoft Fortran operating system, which came out in 1977. It was this OS that could be considered as the first full-fledged competitor of the standard CP/M system for Intel-based computers.

In 1980, Microsoft achieved great success by making a deal with the computer business monster - IBM Corporation. Gates and Allen were able to offer a more attractive and promising system for their new computer than Digital Research company, the previous partner of IBM. It should be added that the friendly relations of Bill's mother with the president of IBM, John Opel, and the CEO John Akers had also played a role in achieving this goal.

However, quite soon the Bill and Paul's company was able to offer the computer market a brand new system, MS-DOS, which for a long time would become the main operating system for Intel-based PCs. In 1985, Microsoft launched Windows, which differed from all previous competitors in graphic design. Thus, the computer era of Windows began, even though the real breakthrough came only in 1933, after the appearance of the third version of this system - Windows 3.1.

In 1986, Microsoft Corporation appeared on the stock market. The share prices multiplied, and within a few months, Bill Gates became a billionaire. Gradually, the company's position strengthened. By 1988, Microsoft was already the largest computer software developer in the world.

By 1998, Gates became the wealthiest man in the world. The financial capabilities had now allowed him to focus on programming, and he announced that he decided to leave the corporation. Until 2006, Bill was still in charge of Microsoft's production strategy but decided to step down from his responsibilities for business development, stating that he wanted to devote his time to charity. Now Bill Gates is actively involved in the implementation of various programs to provide aid in different countries.

In 1989, Gates founded Corbis. The main task of this company was to license digital images, videos and other multimedia materials for mass media. Gate's idea was that someday people would decorate their homes not with real paintings, but with their electronic reproductions.

Today Corbis has exclusive rights to reproduce images of works of art in various museums around the world. The Hermitage in Saint Petersburg, the Philadelphia Museum of Art and the National Gallery in London regularly work with the famous American entrepreneur's company. Bill Gates himself acquired a collection of rare works by Leonardo da Vinci, which are now on display at the Seattle Art Museum.

In the fall of 2008, Gates registered a new company bgC3 (Bill Gates Company Three). This abbreviation means "The third company of Bill Gates." The main task of the company is to conduct research and analyze the data. It is a center that provides scientific and technological services.

Besides, today Bill Gates is engaged in charity work. He and his wife Melinda are the founders of the world's largest charity foundation called the Bill & Melinda Gates Foundation, which provides aid for everyone in need, regardless of their nationality. The task of this organization is to support and improve the health care system, as well as to overcome famish in the third world countries. Gates partially financed the presidential campaign of the Republican George Bush in 2004 from his funds, having spent more than $30 000.

In 1987, at a meeting in New York Bill Gates met a Microsoft employee Melinda French. They got married on the first of January, 1994. Two years later, the couple had a daughter Jennifer Katharine, and then - son Rory John, and daughter Phoebe Adele.

For the huge amount of money that Bill and Melinda spend annually on charity, in 2005, Time magazine named them Persons of the Year. In the same year, Bill was made an Honorary Knight Commander of the Order of the British Empire (KBE) for his contribution to the development of innovative technologies in the UK and the reduction of poverty in the world.

How much money does Bill Gates have? A lot of people on this planet have always been interested in this issue.

According to Forbes magazine, in 2016, Bill Gates' fortune reached $90 billion. It is the highest level of fortune of the American entrepreneur in history. It is he who is the second-richest person in the world.

Every year, the founder of Microsoft Corporation holds one of the top positions in the list of the financial and economic magazine. Microsoft shares take 13% of the billionaire's fortune, and the rest are investments in numerous enterprises from various industries. Forbes analysts predict a further increase in the level of income of the famous businessman.

Gates family lives in a "future house," which is called like that because of the huge number of electronics that control the entire estate. The mansion is located in the side of a hill overlooking Lake Washington and occupies about 12 000 square meters.

Bill Gates often visits educational institutions around the world. During his speeches, he shares his experience and talks about his vision of global problems. Every time the famous businessman speaks to the public, he finishes his speech with a particular phrase, saying that in recent decades children are raised in the spirit of political correctness, creating a generation of people who do not have the necessary skills to survive in the modern world.

The co-founder of Microsoft Corporation is often called one of the most intelligent people on Earth because he is one of those people with the highest level of intelligence. Bill Gates IQ Test score is 160.

Bill Gates is the author of two bestsellers. In the new books, the entrepreneur decided to share his story of success. In 1995, the book The Road Ahead was published, and it was in the Best Sellers list of the New York Times. In 1999, Gates released the book called Business @ the Speed of thought. This work has been translated into 25 languages. The author in his publications talks about the different ways of using computer technology to solve problems in business. The revenues from the sale of both books were sent to non-profit organizations that support technology and education.

«Our modern lifestyle is not a political creation. Before 1700, everybody was poor as hell. Life was short and brutish. It wasn't because we didn't have good politicians; we had some really good politicians. But then we started inventing — electricity, steam engines, microprocessors, understanding genetics and medicine and things like that. Yes, stability and education are important — I'm not taking anything away from that — but innovation is the real driver of progress.»

«When you come up with a good idea, act immediately.»

«Think of business as a good game. Lots of competition and a minimum of rules. You keep score with money.»

«Our children won't be left billion-dollar trust funds. They need to have a sense that their own work is meaningful and important.»

«I am optimistic enough about this that I am willing to make a prediction. There will be no poor countries by 2035. Countries will learn from their most productive neighbors and benefit from innovations like new vaccines, better seeds, and the digital revolution.»

«It's pretty amazing to go from a world where computers were unheard of and very complex to where they're a tool of everyday life. That was the dream that I wanted to make come true, and in large part, it's unfolded as I'd expected.» 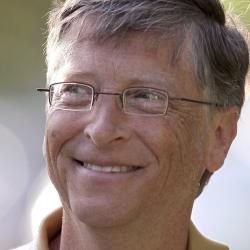