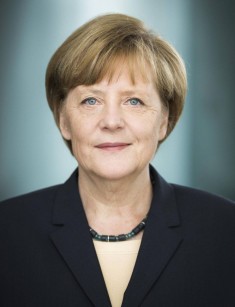 In recent years, Angela Merkel has often topped the rating of the most influential women of the world according to the financial and economic journal Forbes, and her photos always appear on the cover of the major printed publications. Journalists often call Frau Merkel “the new Iron Lady” of Europe.

Angela Merkel’s biography has started in Hamburg. The would-be politician was born on July 17, 1954, into the family of a foreign languages (English and Latin) teacher and the pastor of the Evangelical Church in Berlin and Brandenburg. The early childhood of the future Chancellor was associated with the constant moving home: initially, the Merkels moved to East Germany, then the city Templin (the federal state Brandenburg). Soon, Angela’s sister Irene and brother Marcus were born.

In 1961, Angela Merkel went to school in Templin. She chose the polytechnic school as a child, and her parents supported this decision. She was good at her studies, and now many of her former classmates remember the fascinating intellectual skills of the girl. However, she remained inconspicuous: Angela was a modest child focused on learning.

Merkel said that she was particularly good in Russian and mathematics: in 1973, she passed her final exams with excellent grades.

At school, Merkel decided to continue her education at Leipzig University named after Karl Marx. In 1973, she entered the university, the Faculty of Physics. At that time, Merkel’s political views were formed. She was not among the youth involved in the opposition. The young woman planned to be active in politics and state activity.

There is no doubt that Merkel is a respected politician today. She is the first woman who managed to take the position of the Federal Chancellor. Some sources emphasize that she was the youngest German Chancellor at that moment. However, Angela Merkel’s career had begun long before she headed Germany and European Union. Her path to the top of the political life was quite long.

In 1989, Angela Merkel got hired in the political party “Democrating Awakening” – this event is connected with a wide range of changes in Merkel’s life. German Academy of Sciences at Berlin was suspended due to the wave of democracy traced in East Germany after the Fall of the Berlin Wall.

In 1990, Merkel changed her work and shifted to the Wolfgang Schnur’s party where her climbing the career ladder began. At first, her responsibility was to create the party’s leaflets. In some time, Merkel started performing the function of the party’s press secretary. According to some sources, her friends were surprised by Merkel’s work in The Christian Democratic Union of Germany since her political views were more like those of the Greens.

On March 18, 1990, the party for which Merkel worked failed in the first People’ Chamber elections: only 0.9% of the population voted for them. The People Chamber elections were unexpectedly won by the party Alliance for Germany – 41% of the votes. Merkel got hired as the press secretary assistant.

On October 3, 1990, German reunification occurred, and Angela Merkel stopped her work to take the position of the ministerial counselor in The Federal Republic of Germany Information and Publishing Administration.

On May 30, 2005, CSU and CDU elected the politician as the Chancellor of Germany candidate. At that time, Merkel was known for her impeccable authority and colossal political experience. On September 18, 2005, in the early election to Bundestag, her political alliance won the victory with 35.2% of the votes. At that time, the Greens lost the majority in the Parliament.

Angela Merkel’s political views are aimed at maintaining the European unity. She is widely known for her pro-American opinions about the foreign policy. Nowadays, Germany remains the key partner of the USA in Europe. In relation to Russia, Merkel is quite categorical – she has criticized her predecessor Gerhard Schröder for his excessive pro-Russian position.

Angela Merkel is inclined to the USA, and as she became the Chancellor, the relations between Russia and Germany have not changed dramatically. Just as many EU countries, Germany imposed sanctions on Russia due to the Crimea Annexation.

Merkel also demonstrates the military conflict management course; she is the politician of peace, not war. In particular, Merkel was professional when it came to the Ukrainian crisis – upon her initiative, on February 11-12, 2015, in Minsk, “the Normand negotiations” with the French president François Hollande, the Ukrainian president Petro Poroshenko, and the Russian leader Vladimir Putin took place. In these negotiations, some progress regarding the Western Ukraine conflict was achieved.

During her studies, Angela Merkel met Ulrich Merkel who became her husband. She still uses his surname. In 1977, Angela married Ulrich, but the marriage was not lasting: in 1982, Merkel and her husband divorced; they had no children.

Before the breakup, Angela and Ulrich moved to Berlin since they had been refused to get the job in Ilmenau, the place of residence. Ulrich started working in the central institute of physical chemistry.

Two years after the divorce, Angela Merkel met her second husband Joachim Sauer. However, at this time, the woman took her time in terms of marriage. The couple got married only in 1998. Besides, at the moment of their first meeting, Sauer was married to another woman. The couple has no children.

“Today it sounds comic, but I made a mistake then. At that time, everybody was getting married, and I was misled,” Merkel told journalists.

The 2015 European migrant crisis was one of the most difficult challenges for Angela Merkel for all the time she has been the Chancellor. Millions of migrants from the Middle East and North Africa rushed to the Old World to find salvation. The majority of the migrant flow consisted of the Syrian and Iraqi – on the territory of their countries, there were active military operations.

This situation became a real test for many European countries that had no experience of reaction to such global problems.

The authorities of the Eastern European countries took some “jamming” measures to maintain the migrant flow, but the masses of refugees were impossible to stop. Thus, the UN continental organizations administration decided to introduce the system of quotas for refugees each country could manage.

In fall 2015, Angela Merkel initiated to accept migrants in UN, but soon, the Chancellor of Germany disappointed in her decisions and announced that the mass migration crisis would hardly be solved in the nearest future. Still, the informal leader of the continental organizations never rejected the idea that the countries’ actions would solve the future of Europe.

In September 2015, in her Bundestag speech, the Chancellor of Germany marked that, to manage the catastrophic situation, vigorous measures were necessary for all European counties’ authorities – the mere migrant redistribution over UN states was not enough. Still, the governmental actions did not contribute to the effective problem solving: migrants continued to flee in European Union. As a result, only in 2015, there were approximately 500 thousand migrants and refugees in Europe.

In the course of the crisis, the European Commission officially warned that if the governments would be unable to cope with the negative tendencies it would lead to the right-wing extremism increase on the continent. During the urgent negotiations, the European leaders decided to allocate €1 billion to help millions of Syrian refugees who were in the neighboring countries of the Middle East. Gradually, the leaders managed to agree on the external UN border fortification.

In February 2016, the situation in the European Union was critical. At the UN summit in Brussels, the leaders of the countries tried to come to agreement with Turkey representatives and create the plan according to which Turkey would accept refugees. This idea implied that Ankara would receive €3 billion euro annually to place Syrian and Iraqi citizens in the Turkish territory. It gave a positive effect: the flow of migrants decreased significantly soon.

Because of the migrant crisis, Merkel’s position became weaker as well as the positions within the governing coalition. In Germany, the politicians’ discord was sowed, and there were talks about the Federal Prime Minister’s resignation. The German media started informing people that Merkel was ready to cooperate with her rivals and avoid the most burning issue about the migrant quotas distribution.

The International public TV and radio company Deutsche Welle said about Angela Merkel’s political perspectives on the elections on February 17, 2016:

“The high-positioned representatives of the Bavarian CSU do not recommend their CDU colleagues to declare themselves as Merkel’s politics supporters – they consider her the “dead steam.” According to them, they had no chance to win a plant pot. In the conservators’ parliament fraction, there was only discontent, and the Chancellor was losing her positions.”

However, the failures of her Chancellor activity did not prevent Merkel from becoming the leader of the German government again. In fact, the CSU and CDU had no advantageous alternative to such an influential and experienced politician.

Social Democratic Party of Germany was the main rival of CSU and CDU in the parliament elections. In this party, there were many famous German politicians capable of winning.

The Minister for Foreign Affairs of Germany Frank-Walter Steinmeier and the Vice Chancellor Sigmar Gabriel were the main candidates for the post of the Federal Chancellor from SDP. Still, it is likely that any coalition would prefer to submit Merkel as a candidate, not two officials who had not demonstrated effective results. Besides, in one of her interviews, Angela Merkel called Steinmeier “the person who perfectly fits to be the German President.”

Martin Schulz who was the President of the European Parliament became the main SDP candidate. It was Schulz who could really become the main rival for Angela Merkel in the Chancellor of Germany position fighting.

His expertise in managing the organization on the continental scale reinforced the position of SDP in the Parliament elections. His pre-election rhetoric was not very much different from that of the Merkel’s campaign, but the lack of involvement in the migrant crisis helped him.

The conservative and Euroskeptic party “Alternative for Germany” was another political force that could have many votes. The 2014 elections results demonstrated that this party’s program was accepted by a significant number of voters in the South-East. Still, they could not be called serious “Euroskeptics” – this party was more about reforming Europe with some degree of mutual borders erosion.

Angela Merkel’s chances to become the Federal Chancellor once again were high. The politician was confident in her strength and capable of prevailing over her rivals – now in the harsh struggle. The elections-2016 in three federal states (Baden-Württemberg, Saxony-Anhalt, and Rhineland-Palatinate) demonstrated Merkel’s position weakened since the party CDU led by Merkel lost votes in elections to landtags in all areas.

Again, Angela Merkel became the Federal Chancellor of Germany which was a positive signal for the united Europe to reinforce its continental collaboration. 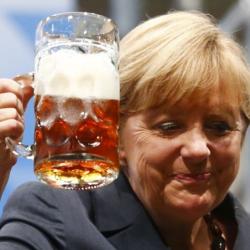