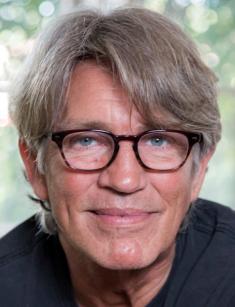 Eric Anthony Roberts is an American actor who plays in films and TV series, has received one Academy Award and three Golden Globe Award nominations. He is the elder brother of Hollywood star Julia Roberts. Eric was born on April 18, 1956, in Biloxi, Mississippi. Later, when the family lived in Atlanta, two more children, sisters Lisa and Julia, were born. Father Walter Roberts worked as a director and headed the theater studio, and mother Betty Lou was an actress.

As a child, Eric suffered from stuttering, but whenever the boy read poems, this disease disappeared. The father decided to help his son and began to give the child small roles in his productions. At the age of 5, Eric first appeared in front of the camera in the play The Little Pioneers, which was staged by his father. The boy made the final decision to pursue an acting career at the age of 11 after watching the film Goodbye, Mr. Chips.

In 1970, the Roberts family broke up, when the mother left her husband for another man. Eric supported his father and worried about the parents' divorce very much. Having taken up with the wrong older guys, the young man began to use alcohol and drugs. At the same time, Eric already played in his father’s troupe, showing excellent acting skills. In 1972, Walter decided to send his son to the best theatre institutions, the Royal Academy of Dramatic Art, in London to be far from the troubled friends.

The studying changed the young man’s life, and Eric got rid of bad habits and developed his career. After graduation from college in England, Eric entered the American Academy of Dramatic Arts and began performing on Broadway, making his debut in the play Burn This. The actor succeeded and played more than 100 roles on the stage.

Eric Roberts began his acting career in 1976 when the actor first played a minor role in the NBC series Another World, which aired for 12 years. In 1977, Walter Roberts died of cancer, which shocked Eric. The actor began to drink alcohol again.

In 1978, Roberts made his full-length movie debut in Frank Pierson's drama King of the Gypsies. Eric and Brooke Shields played the title characters, Dave and Tita, in the movie. One year later, the actor was nominated for the Golden Globe Award. In 1981, he starred in the film Raggedy Man.

The same year, Eric was seriously injured in the car accident. The actor injured his face and was on the verge of death for a few days, but managed to recover from a coma. The young man began to move six months after a series of operations. Plastic surgeons could completely reconstruct the face. There are almost no scars, as shown in the photo after the accident.

Soon, Eric Roberts appeared as a villain in the 1983 drama Star 80 about the fate of Playboy model Dorothy Stratten. For the leading role of Paul Snider, Eric received a second Golden Globe nomination. A year later, the actor and Mickey Rourke played in the comedy The Pope of Greenwich Village.

In 1985, Roberts's filmography included two films, the Australian comedy The Coca-Cola Kid and Andrei Konchalovsky’s adventure drama Runaway Train. Eric Roberts was nominated for the Academy Award for Best Supporting Actor and the Golden Globe Award for the role of an escaped prisoner, Buck.

In the late 1980s, Eric Roberts played only the leading roles in Hollywood films such as the detective film Slow Burn, the comedy Rude Awakening, the western Blood Red, the action movie Best of the Best, Larry Cohen's horror film The Ambulance. In the 1990s, Eric Roberts was mainly associated with negative characters. He played criminals, thieves, psychopaths, which adversely affected the actor’s state of mind.

During these years Roberts appeared in the films Love, Cheat & Steal, Sensation, The Nature of the Beast, Freefall. The hard work led to a breakdown, after which the actor had to undergo therapy for drug addiction.

In the late 1990s, Eric began to collaborate with television channels and played roles in the TV series Saved by the Light, Dark Angel, Doctor Who, Frasier, The Drew Carey Show, Oz, Lansky, Purgatory. In 1996, Eric Roberts played a drug dealer, Bubba Rocque, in the thriller Heaven's Prisoners with Alec Baldwin in the leading role.

In 1997, the adventure miniseries The Odyssey directed by Andrei Konchalovsky was released, in which Roberts got the role of Eurymachus, one of Penelope's suitors. The same year, Eric portrayed the positive hero, SAC John Olansky, in the crime series C-16: FBI.

Russian director Rodion Nakhapetov often offered Eric Roberts to play in his films Russian in the City of Angels, Border Blues, Contamination. The actor appeared in about ten movies each year. He acted in films of different genres: comedies, thrillers, crime films, dramas, and westerns. The most famous projects of the second half of the 2000s were Fatal Desire, Pandemic, Pinkville, The Expendables. In 2015, Eric Roberts portrayed Dave Parker in William De Vital’s drama The Code of Cain.

The actor could not improve his personal life for a long time. In the late 1970s, Eric Roberts began dating Sandy Dennis, who at that time was almost twice as old as the actor. Then Roberts fell in love with actress Ellen Barkin. In the mid-80s, Eric met Kelly Cunningham, who gave birth to a daughter, Emma Roberts, in 1991.

By then, Eric's feelings for Kelly had already faded. In 1992, Roberts made a marriage proposal to Eliza Garrett. In 1996, Roberts's wife became the actor’s manager. The woman also starred with her husband in several films.

Nowadays Eric Roberts is working on the American-Russian project Maximum Impact directed by Andrzej Bartkowiak, in which he plays together with Yevgeny Stychkin, Maxim Vitorgan, Alexander Nevsky, and Mark Dacascos.