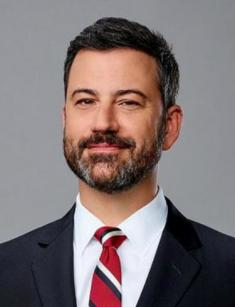 To host your own show in prime time on a popular channel, you need to have a sharp mind, a sense of humor and impeccable taste. The ability to make your conversational partner talk would also be an advantage, as well as rapid reaction and vast knowledge.

All these features are characteristic of the American TV presenter Jimmy Kimmel. No wonder his one-hour long night show has been successfully broadcast on ABC channel for fourteen seasons now, and the man himself was asked to host the prestigious Oscar ceremony for two years in a row.

James was born in 1967 in New York City and became the eldest son of Joan (née Iacono), and James John Kimmel. The boy's parents have European ancestry: Kimmel's mother is of Italian ancestry from Ischia, whose family migrated to the United States, while two of his paternal great-great-grandparents were German immigrants. Later the family had two more children - Jonathan and Jill.

Children were brought up in Catholic traditions, and the eldest son was even an altar boy in the church.

In 1976, the family moved to Las Vegas, Nevada. There the future comedian spent his childhood and youth.

In middle school, Kimmel made his first interviews on the college radio. He continued his career of presenter while receiving education at the University of Nevada, Las Vegas and Arizona State University. Jimmy never graduated, but his daytime show on Arizona student radio was a hit. In 2013, the University of Nevada awarded the former student an honorary degree.

In 1989, the guy got his first paid job at KZOK-FM in Seattle. In search of successful projects, he often moved from one place to another and was heard on the waves of Florida, Arizona, and California. He spent five years as "Jimmy The Sports Guy" for the Kevin and Bean morning show in Los Angeles.

The work on television occupies the central place in the biography of Kimmel. He began his television career as the comedic counterpart to Ben Stein on the game show Win Ben Stein's Money, which began airing on Comedy Central in 1997. The comical contrast between Ben and Jimmy captivated the audience, and in 1999 they won an Emmy for their work.

In 2001, Kimmel left the project to work on The Man Show and Crank Yankers as an author and producer on the same channel.

On January 26, 2003, the first episode of Jimmy Kimmel Live! was released on ABC channel. This traditional for American television form of a night talk-show involves interviews of a witty presenter with famous personalities. In this respect, the comedian wasn't a pioneer, and he always considered Late Show with David Letterman to be a benchmark for the genre.

Jimmy succeeded in creating a show with a unique style that in fifteen years hasn't bored the audience yet. Over these years, more than three thousand episodes were broadcast.

A joky confrontation between Jimmy and actor Matt Damon became the hallmark of the show. The host ended the first episode with the phrase "My apologies to Matt Damon, we ran out of time."

Since then, the comedian mentions the actor in almost every episode. In 2006, Matt came on the show, but Jimmy took so long to present him, that the program ended at precisely the moment the guy came on the stage. Kimmel apologized in his traditional way saying "Unfortunately, we are totally out of time," followed by "my apologies to Matt Damon."

In 2008, Kimmel's girlfriend, comedian Sarah Silverman, presented a video "I'm Fucking Matt Damon" on the show, where she confessed to her boyfriend that she was having an affair with the actor. Jimmy returned "the favor" and came back at her with a mock music video "I'm Fucking Ben Affleck."

Men continued their "fight" in the sketch The Handsome Men's Club, and it can be said that this "fight" has already become an American national meme. Even at the Oscars, Kimmel couldn't resist the temptation to troll Damon.

In general, the man is good at pranks and jokes on the verge of provocations. Once the audience witnessed Johnny Depp kissing Jimmy Kimmel on the lips right on the air.

Hundreds of guests, from world-famous stars to aspiring artists were on the show. Barack Obama, Oprah Winfrey, Robert De Niro, Rami Malek, and others came to the show.

As a recognition of his work, the showman was awarded a star on the Hollywood Walk of Fame on January 25, 2013.

Jimmy is a multiple time winner of various professional awards. In 2018, the presenter received the Television Critics Association Award for Outstanding Achievement in Sketch/Variety Shows.

Jimmy Kimmel was married two times. The TV host got married in 1988 for the first time, Gina Maddy, his university love, became his wife. The young people studied together at the University of Arizona. In their marriage, they had two children: Katie Kimmel (1991) and Kevin Kimmel (1993). As the show and Jimmy's career flourished, his marriage started falling apart. The couple got divorced in 2002.

Gina Kimmel was three years older than her husband and worked as a costume designer in the film industry. After the divorce, the woman moved to Chicago and now produces a line of clothing of nightwear and homewear.

His son Kevin lives in California and works as a production assistant on Survivor, Big Brother, Tosh.0 shows. His daughter Katherine works as a designer.

After parting with his wife, Jimmy started a long-term relationship with the popular comedy actress and stand-up comedian Sarah Silverman. The couple has much in common: they are both America's favorites, and they create the most popular TV shows.

This relationship ended in March 2009, when a new assistant Molly McNearney, appeared in the personal life of the comedian. The girl worked on the show Jimmy Kimmel Live! as a co-writer of the script, and then was appointed to the position of executive producer. In 2013, Molly became the wife of her boss.

In 2014, the couple had a daughter Jane, and in 2017 their son William ("Billy") John was born. The infant was born with a rare congenital heart defect, tetralogy of Fallot (TOF) with pulmonary atresia. He underwent successful surgery at three days of age. The first guests Kimmel had when his show returned following his son's birth were cardiac surgeon Dr. Mehmet Oz, who explained the condition, and snowboarder Shaun White, who was born with TOF. For many years, Jimmy himself has been living with narcolepsy, which he keeps under control with the help of meds.

Kimmel is friends with Don Rickles, Joan Rivers, Ben Affleck, and David Letterman, the idol of his childhood. His hobbies include fishing and playing bass clarinet. He shares the political beliefs of the US Democratic Party and supports it.

The showman and his family live in Los Angeles next door to Dakota Johnson. Jimmy's house is located on the Hollywood Hills, and it cost him $ 2.3 million.

Net worth of the man is estimated at more than $35 million.

In 2018, the Kimmel took part in the jubilee Oscar ceremony, hosting the 90th Academy Awards.

The man continues to host and produce the show, which in 2019 had Viggo Mortensen, Billy Crystal, Anne Hathaway, Courteney Cox, and other stars as its guests.

Jimmy has an official Instagram account, where he often puts photos of junk food, which he consumes with utmost pleasure. At the same time he stays fit: at the height of 6 foot, he weighs 183 pounds.