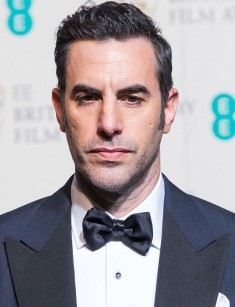 The British actor Sacha Baron Cohen’s career has not been smooth. He managed to achieve success due to his fictitious characters: the junglist Ali G, the reporter from Kazakhstan Borat Sagdiyev, Admiral General Aladeen, and Austrian gay man Bruno. People also remember the artist for his extravagant actions at various ceremonies.

Sacha Noam Baron Cohen was born on October 13, 1971, in Surrey, Great Britain. He grew up in the Jewish family; he had two siblings. The family was wealthy: the father owned a men’s clothing store, and the children had everything they needed. One of Sacha’s brothers, Erran Baron Cohen, became a composer; today, he works with Sacha on movies.

Soon, the family moved to the elite district of London. Cohen went to a prestigious school and later entered the Christ’s College in Cambridge. There, he discovered his talent of an actor. He began in students’ amateurish performances and showed himself in “Cyrano de Bergerac” and “Fiddler on the Roof.”

The handsome man tried himself in modeling business as well. He was lucky: in a while, his photos appeared on covers of fashion magazines. However, it was not enough for Sacha: he was always looking for the right place in life; for example, he tried to be a weatherman on a cable channel.

In 1995, Channel 4 was looking for a TV presenter. Sacha sent TV professionals his recording where he played Kristo, the correspondent from Albania. Producers approved of the young man’s candidature. For the next few years, Baron Cohen worked at this channel, took part in several projects, and appeared in ads.

As Baron Cohen graduated from the college, he got hired in a comedy club owned by Sacha’s brother. The young man took fancy in the political satire. In 1998, he recorded a two-minute video where he played a gay fashion show presenter.

Sacha became popular later, when he created the image of Ali G. The personage began to appear on Channel 4; in 2000, he had his own program. The satirical show was loved by people. As the actor caught the wave of glory, he moved to the USA; his show was regular on one of the channels.

The actor won the global fame in 2002 after the movie “Ali G Indahouse” was released. The comedian called this work “the light warm-up” because he played the character he had made himself and got used to.

In 2006, the audience watched “Borat: Cultural Learnings of America for Make Benefit Glorious Nation of Kazakhstan” where Sacha appeared as the well-known Borat Sagdiyev, the journalist from Kazakhstan. The provocative movie made people of that country angry and was banned. However, the scandals only contributed to the actor’s popularity.

In 2012, the Minister of Foreign Affairs of Kazakhstan thanked Sacha Baron Cohen for developing tourism in the country.

In 2006, the movie “Borat” was the box office leader; the National Board of Review of Motion Pictures called Baron Cohen the best actor of the year. At the beginning of the following year, he won the Golden Globe Award for the best male role and the MTV Award for the best comedian role.

In 2007, Sacha starred in Tim Burton’s “The National Board of Review of Motion Pictures.” Jonny Depp and Helena Bonham Carter were his stage colleagues.

The comedy “Talladega Nights: The Ballad of Ricky Bobby” became the next TV project by Cohen. In 2009, the movie “Bruno” laughing at the modern society came out. The movie turned out to be the highest grossing movie in America, Canada, England, and Australia. It is interesting that the police received 91 calls while the movie was being made.

In the same year, the actor participated in the MTV VIDEO MUSIC AWARDS ceremony. Sacha appeared in the image of Bruno; according to the scenario, Baron Cohen should have descended wearing the costume of an angel. However, he almost set on Eminem’s face when he was landing. The rapper was furious.

In “The Dictator,” Sacha Baron Cohen rejected the previous standards. He played two leading parts: the despot Aladeen and his double; he tried to show his characters’ motives and explain their actions. In 2012, “The Dictator” was out internationally and received critics’ positive reviews. In the first week, the movie box office was more than $60 million.

In 2010, Sacha should have played Freddie Mercury in the biographical movie, but the project was not continued because of the different opinions between the actor and musicians. The actor also starred in “Les Misérables,” “Hugo,” “Grimsby,” “Alice Through the Looking Glass.”

In three parts of “Madagascar,” Cohen voiced the king Julien. Besides, he also worked on “Curly Oxide and Vic Thrill.”

In 2013, Sacha Baron Cohen was invited to the Britannia Awards ceremony; the comedian was to receive the BAFTA Charlie Chaplin Britannia Award, it was announced the actress who played with Chaplin and lived to see that day was going to give the award.

As the actress handed the Charlie Chaplin’s cane, Sacha thanked her and leaned in it; the cane broke into two parts. Cohen fell on the woman and kicked her off the stage with her wheelchair.

The audience was shocked; some people were going to call the ambulance. However, when Sacha Baron Cohen got up and continued his speech as if nothing had happened, people realized it was a planned trick.

Sacha Baron Cohen is married to the Canadian actress Isla Fisher. They had been dating for eight years and married only in 2010. For three years, Cohen’s beloved woman had been studying Judaism and then converted so that Sacha’s parents would give them their blessing.

In fall 2007, Isla gave birth to the girl Olive. In summer 2010, the second daughter Elula was born.

The actor has the verified Instagram page under the names of his four characters; he shares funny photos and videos there.

At the end of 2017, six tourists from the Czech Republic were arrested in Astana for walking in the city dressed like Borat. As a result, they were fined. As Sacha Baron Cohen learned this news, he decided to help his fans and made a commitment to pay the money they had to spend.

In April 2018, it was announced the actor would take part in the six-episode mini-series “The Spy.” Baron Cohen turned into the Israeli intelligence officer Eli Cohen known for his ability to transform into another person; in the 1960s, he entered the circles close to the government of Syria. In 1965, he was disclosed and condemned to death penalty. 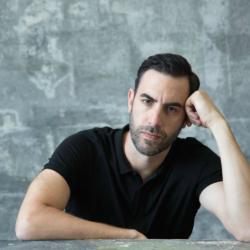