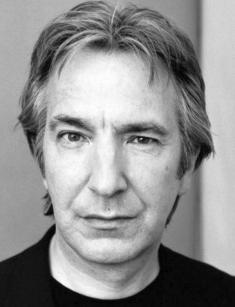 Alan Rickman was born in February 1946 in a London borough Hammersmith. The boy had an elder brother David (two years older) and the younger siblings Michael and Sheila.

The family was not wealthy: the father, Bernard William Rickman, worked at a factory, and the mother, Margaret Doreen Rose, kept a house and brought up the kids.

When Alan turned eight, life got even more difficult: Bernard died of lung cancer. The boy realized that a person could count only on themselves, and it was useless to wait for a miracle. Rickman was a diligent student and earned a scholarship at the prestigious Latymer Upper School.

This is where Alan debuted as an actor: the school drama club staged a play and gave him a role. Rickman fell in love with acting and began to consider it as his future career. If it had not been for his love of drawing and design, the acting career could have started earlier. Still, Alan enrolled at Chelsea College of Art and Design and continued his education at the Royal College of Art. As a student, the young man got hired as a designer at the Notting Hill Herald publishing house.

Rickman lived from hand to mouth at that period. When he graduated from the college, Alan and his five associates opened a design studio in Soho. However, the benefits were not substantial. At that moment, Rickman remembered his old hobby and sent a letter to the Royal Academy of Dramatic Art where he asked for the auditions. The young man was accepted. Soon, he showed much improvement and received several prizes for his brilliant acting. These achievements allowed him to get a royal scholarship.

Alan Rickman began his acting career at the theater: in the mid-1980s, he participated in the Broadway play Les Liaisons Dangereuses and personified the main character, Le Vicomte de Valmont. Soon, the producers Joel Silver and Charles Gordon noticed the promising artist.

They invited the actor a role in the action movie Die Hard starring Bruce Willis. Rickman, who had been dreaming of cinematography for a long time, gladly accepted the offer. The project came out in 1988 and proved to be a tremendous success.

Alan personified the villain and looked brilliant. The director Kevin Reynolds was so inspired that he offered him another antagonist part in the adventure movie Robin Hood: Prince of Thieves. It was released in 1992 and received the warm welcome among critics and ordinary people; they emphasized Rickman’s genius acting of the evil figure.

Soon, another project with Alan Rickman was presented: the melodrama Truly, Madly, Deeply. It was the first positive role. The actor was so adaptive that any type of character looked equally convincing when he worked on it.

Rickman had another starring role in the 1996 movie Rasputin: Dark Servant of Destiny. It brought him the first notable prizes: the Golden Globe and Emmy.

The man was eager to try himself as a director. The dream came true in 1997: he staged a play and then created a movie based on Sharman Macdonald’s The Winter Guest. The director’s debut was successful: the movie gained two prizes at the Venice Film Festival.

Several years later, Rickman directed the play My Name is Rachel Corrie. The London audience enjoyed it in 2005.

Fans love the actor not only for his brilliant acting but also the magnificent tone of voice. The research aimed at finding the “perfect” voice showed that Rickman’s voice was one of the best ones; the artist had the ideal English pronunciation. Above all, he was a popular voice actor. Harry Potter fans are well aware of that: Alan played Professor Severus Snape, and his voice was a significant component of this character. Joanne Rowling herself approved of the artist.

In the 2000s, the celebrity appeared in various movies. In 2003, he played in Love Actually with Emma Thompson. 2006 brought two wonderful movies where the actor had the lead roles: the much-spoken-about Snow Cake and Perfume: The Story of a Murderer. The next year, the man personified Judge Turpin in Tim Burton’s Sweeney Todd: The Demon Barber of Fleet Street and continued to play at the theater.

The comedy Gambit, the musical and historical drama CBGB, and Eye in the Sky where Rickman played Lieutenant General Frank Benson stood out among the man’s last works. Eye in the Sky was released in spring 2016 when Rickman had passed away. He also did not witness the premiere of the 2016 adventure fantasy movie Alice Through the Looking Glass where he voiced Absolem.

Rima Horton was the only love in Alan Rickman’s life. The couple met when the actor was 19, and the woman turned 18; since that time, they never separated. Rima was a lecturer at Kingston University and a prominent activist of Labor Party. The spouses had always been an example of a happy marriage and full mutual understanding. They had no children.

It is peculiar that Horton and Rickman married officially only in 2012, 50 years after their first meeting. The media learned the news even later, in 2015: the Bild newspaper reported that first. The actor told the reporters the wedding ceremony took place in New York; it was beautiful because there were no guests present.

Despite his celebrity status, Rickman remained a simple, modest person. “I can only see my limitations. That's just who I am”, reads one of his quotes.

Alan Rickman died on January 14, 2016. It was unexpected for the majority of fans. The memorial service was held in February 2016 at St. Paul's Church, Covent Garden; the church is often called “the actors’ church”.

Galloping pancreatic cancer was the cause of death. The actor was diagnosed with it in summer 2015 when he was hospitalized with a minor stroke. He did not live only a month to his 70th birthday.

Alan Rickman’s net worth was $16 million.