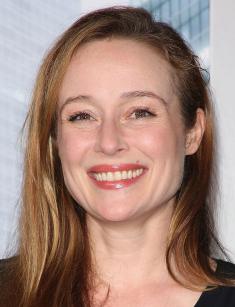 Jennifer Anne Ehle is a British-American stage and screen actress. The most significant role in her career was the part of Elizabeth Bennet in the 1995 TV series Pride and Prejudice. It was the most successful adaptation of the novel by Jane Austen. Talented Jennifer began an acting career at the age of three. Nowadays, her credentials include more than 60 movies.

Jennifer Ehle was born on December 29, 1969, in Winston-Salem, North Carolina. Her mother, Rosemary Harris, was an English actress and the movie awards winner. The woman was even nominated for the Academy Award. Viewers know her for the role of Aunt May Parker in the movie Spider-Man. Her father is an American author and screenwriter John Ehle. He wrote the scripts for the TV series Studio 57, the films Winter People and The Journey of August King.

The fact that the girl was born in such a creative family left Jennifer a little option. Her destiny was to become an actress. She landed her first role at the age of 3. She went to the theatre stage with her mother, who played in the Broadway revival of A Streetcar Named Desire. But the real theatre debut was the role of Calypso in the play The Camomile Lawn, based on the book by Mary Wesley. At that time, the young actress appeared in the first nude scenes. Later, Jennifer said in an interview that she didn’t realize that some roles would require so much nudity.

The girl traveled a lot with her mother, so during her childhood, she changed 18 schools. But seeing her mother, she did not hesitate to devote herself to art. Therefore, Jennifer Ehle improved acting skills since childhood. She studied at the North Carolina School of the Arts and the Central School of Speech and Drama in London.

In 1992, Peter Hall offered the young actress to audition for the TV series The Young Indiana Jones Chronicles. She got the role of Empress Zita of Austria. After that, the young woman landed a leading role in the TV series Rik Mayall Presents: Micky Love.

In 1993, directors began filming Backbeat, in which she portrayed Cynthia Lennon. The film shows the life story of John Lennon’s friend, Stuart Sutcliffe. It focuses on his dreams of becoming an artist, his love and death.

But Jennifer Ehle’s main success was the role of Elizabeth Bennet in the cult adaptation of Jane Austen's “Pride and Prejudice.” Her partner was Colin Firth, better known for the films The King's Speech, Tinker Tailor Soldier Spy, Bridget Jones's Diary.

The actress has repeatedly said that she was a fan of the book by Jane Austen. So, when she was offered the leading role in his film adaptation, the woman could not believe that she was so lucky. Jennifer played Elizabeth Bennet so brilliantly that she was awarded the prestigious BAFTA Award for this role. It is noteworthy that during the filming, Jennifer had a very short hairstyle, and she had to wear wigs to have her hair styled.

Both viewers and critics warmly received this TV series. Until now, this adaptation of the novel is considered the most successful one. After filming in Pride and Prejudice, Jennifer Ehle was showered with new offers.

In 1999, Jennifer met her mother on the set of the film Sunshine, in which they played the same movie characters at different ages.

The actress met Colin Firth again on the set of the tragicomedy The King's Speech. She got a bit part of Myrtle Logue, the wife of speech therapist Lionel Logue.

At the same time, Jennifer Ehle did not forget about the theater. The actress regularly appears on the theater stage. The most notable theater performances are Kevin Spacey's production of The Philadelphia Story, Macbeth and Tom Stoppard's The Coast of Utopia. It was her second collaboration with Stoppard. In 2000, she already played in his play The Real Thing. The actress won the Tony awards for both these works.

In 2014, the actress starred in the film adaptation of the famous novel “Fifty Shades of Grey” by Erika Leonard James. She played the mother of the title character, Anastasia Steele. She also participated in the continuation of the film.

While working on the TV series Pride and Prejudice, Jennifer Ehle had a romantic relationship with actor Colin Firth. Therefore, the feelings of Elizabeth Bennet and Mr. Darcy look so real. After all, the actors were in love. Their love affair lasted a year and a half. The actors did not comment on the reasons for the separation.

Shortly after the breakup with Firth, Jennifer met writer Michael Ryan. Subsequently, he became her husband. In 2001, the couple celebrated the wedding. The actress has said more than once that she feels like a happy wife and mother. They have two children: a son, George (2003), and a daughter, Talulah (2009).

Jennifer Ehle is an active Instagram user. The screen and stage star often posts photos of her everyday life and family. There are pictures of family dinners with parents, walks with children. Of course, the actress also shares backstage pics.

In 2017, two films with her participation Wetlands and I Kill Giants were released. The actress continues to act in films. The movie The Professor and the Madman is scheduled to be released in 2018. The actress also plans to play in the film adaptation of the novel "The Miseducation of Cameron Post" by Emily M. Danforth.

Many Jennifer Ehle’s fans consider that she and Meryl Streep look alike, although the celebrities are not relatives.

Jennifer Ehle has a net worth of $4 million.