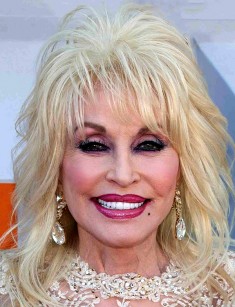 Famous country singer and film actress Dolly Parton turned the American dream into reality. She grew up in a poor family. At the age of ten, the actress who did not sleep or eat enough spent the last money on singing lessons, which in the end paid off in spades.

In 1959, the young talented girl, who sang in the church for three years, won the main prize at the competition of novice singers in Tennessee. This event was the starting point in the music career of the attractive blonde.

Dolly Rebecca Parton was born on January 19, 1946, in the state of Tennessee. Unfortunately, there is little information on the Internet about the childhood and youth of the singer. It is only known that the actress’s family had twelve children (her sister Stella also became a singer) and before becoming famous, Dolly wrote songs for renowned country musicians for a couple of years.

In November 2016, the film Dolly Parton's Christmas of Many Colors: Circle of Love premiered. The plot is based on the biography of the singer. The film begins with a story about Robert Lee, the father of a large family who was short of money.

The man sacrifices a lot to buy an expensive ring for his wife for Christmas. His children, little Dolly, her sisters, and brothers, also contribute and refuse gifts to help the dad. At that time, Dolly’s uncle, Billy, realizes that the amazing singing of the girl will help her family not to remain in poverty.

Dolly performed the first author song “Puppy Love” at a competition in New York City, and in 1967 RCA had already signed a contract with the promising singer. The same year, the first album of the singer “Hello I’m Dolly” was released. Then Parton sang a duet with Porter Wagoner for a couple of years.

The duet that was created by chance became a golden ticket for Dolly. The songs "Just Someone I Used To Know," "Daddy Was An Old Time Preacher Man" helped her to pave the way to Hollywood.

It is worth mentioning that the collaboration with Wagoner did not prevent the singer from filming and adding new movies in her filmography. So, after the end of shooting in Steel Magnolias, the actress went on the first grand tour across Europe, and she has an even higher rating than Madonna.

In 1971, Dolly attracted the public attention releasing the album Coat of Many Colors, which is still considered a milestone in the history of country music. Three years later, the singer wrote the single "Jolene" (according to Rolling Stone magazine, it is Dolly’s best song) and "I Will Always Love You."

Over the following years, Parton was the most famous country singer, but she dreamed of more. In 1977, the album Here You Come Again was released, which made Dolly well-known outside the USA.

During this period, the attractive singer was invited to film again. In 1980, the comedy 9 to 5 premiered. In the story the actress together with Jane Fonda rebel against the tyrant boss. The song “9 to 5”, written by the actress for this film, became an informal anthem of office workers, was nominated for an Oscar Award, and after the premiere of the movie topped the American charts for a few weeks.

Two years later, Dolly Parton recorded with Kenny Rogers the song "Islands in the Stream," which for a long time topped the Billboard Hot 100 chart. During the next two decades, she was the only country performer to achieve such success on the pop charts.

In the late 1980s, Dolly returned to the country music audience. In 1987, she released the album Trio, recorded with country divas Emmylou Harris and Linda Ronstadt (a continuation of this disc was released 12 years later), and in 1993 pleased the fans with one more collaboration. This time she worked with Loretta Lynn and Tammy Wynette.

1998 was marked by the release of Julio Iglesias’s album “Ma Vie: Mes Plus Grands Succes," and Parton participated in the recording (“When Tell Me That You Love Me”).

In 1999 and 2002, Dolly released new albums, for each of them Parton won a Grammy award. In 2005, the actress won the Academy Award for Best Original Song for “Travelin 'Thru” which was written for the comedy-drama Transamerica. The same year, the singer was honored with the National Medal of Arts.

From 2003 to 2016, the discography of the performer included the albums For God and Country, Those Were the Days, Backwoods Barbie, Better Day, Blue Smoke and Pure & Simple.

In May 1966, Dolly married Carl Thomas Dean, whom she had dated for two years. It is known that the husband had nothing to do with show business and worked in the road service.

The husband always avoided the attention of the paparazzi and accompanied his wife to a social event only once. The couple does not have children, so they raised singer's younger brothers and sisters in her house in Nashville. According to Parton, the children called her "Aunt Granny."

In 2014, Dolly commented on the dramatic changes in the image of her goddaughter, singer Miley Cyrus. Then, the singer of the composition “I Will Always Love You” said in an interview with media representatives that the public should pay attention to Miley’s talent, but not to her outrageous behavior.

Cyrus writes songs, sings brilliantly and the fact that she became daring and decisive out of the blue does not spoil her at all. On the contrary, it gives some zest, which she had lacked previously.

Despite the articles that were published at that time in all European editions, Parton was sure that there was no reason for concern since the teen idol only took advantage of it.

It is known that in 2013 GQ magazine included the former star of the TV series Hannah Montana in the list of the least influential people. However, after Miley became one of the most debated figures in show business, and the number of hits of the diva’s music videos on YouTube broke all records, Time magazine rehabilitated the bodacious singer.

According to Dolly, the goddaughter was proud and valued her work in the TV series Hannah Montana. However, people decided that Miley was an exemplary, beautiful girl in real life. Cyrus literally choked with the role imposed on her by the public and felt that she had a vital need to destroy the image that the film with her participation created.

It is worth mentioning that Dolly is not only the godmother of Cyrus, but also her friend. The singer of the song “Wrecking Ball” has always spoken well of Parton, calling the actress her idol and role model. Dolly starred in the first episodes of Hannah Montana, and also sang a duet with her goddaughter more than once.

In 2017, the singer travels around cities and countries, delighting fans with the performance of her hits of the past years. In October, the artist gave a concert in Australia, and also visited Nashville, in which Dolly performed a duet song “Islands in the Stream” with Kenny Roger on Bridgestone Arena.

Despite the busy schedule and touring, the artist has not forgotten about her fans. On Instagram Parton regularly posts photos of concerts, as well as video cuttings of the shows, in which the charismatic blonde is filming till the present day.

It is worth mentioning that social networks are not the only source of the latest news about Dolly’s life. The content related to the creative career of the Hollywood star is often published on various Internet portals and in print media. 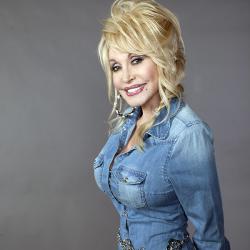