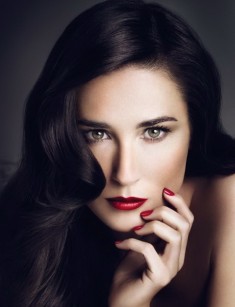 Demetria Gene Harmon, better known as Demi Moore, was born in November 1962 in Roswell, New Mexico, in the USA. The future Hollywood star had a very difficult childhood. Her father, Charles Harmon, left the family before Demi was born. Soon he went to jail, and mother, Virginia King, married again. Her husband was Dan Guynes, an advertising manager who abused alcohol and was a desperate gambler.

Demi Moore’s childhood memories are drunken brawls in their home and constant move (the actress says that the family has changed at least 40 cities). Demi's mother had a long record of arrests. She was arrested for drunk driving and domestic scandals.

Virginia King and Dan Guynes had common son Morgan, Demi’s half-brother. After his birth, the life in the family became unbearable. Demi often ran away from home. At the age of 16, she left school and found a job in a modeling agency. At age 17, she married a rock musician who was 12 years older. The purpose of this rapid marriage was the desire to get rid of the custody and constant mother’s hysterics. Demi soon divorced Freddy Moore, keeping only an imposing name after this marriage.

In the modeling agency, Demi Moore met Nastassja Kinski, who advised the girl to try herself as an actress. According to another version, Demi’s mother helped the daughter to start acting career, as she had influential friends on television. Allegedly, her mother contributed to the fact that her daughter got the first role in the series General Hospital. This film is the beginning of Demi Moore’s cinematic biography.

It is said that before the conquering of Hollywood, the future actress underwent Rhinoplasty Surgery and corrected the congenital cross-eye.

After the shooting of the series, Demi Moore appeared in several films, where she played bit parts. The most famous movies of early years are Blame It on Rio and About Last Night...

In 1985, young director J. Schumacher offered the actress to star in his project St. Elmo's Fire. But he demanded to stop using drugs, which Demi Moore abused. To get a role in Schumacher’s movie was very prestigious. Demi underwent a course of rehabilitation and she claimed that she gave up drugs and alcohol forever.

A year later, the actress starred in the movie Wisdom, where she played the role of the girlfriend of the main character, a gangster who imagined himself as Robin Hood.

Demi Moore returned to shooting after some break, connected with the birth of her daughter. In 1990, she played artist Molly along with Patrick Swayze in the sensational film Ghost. The film became a bestseller and brought huge box office grosses. Although Demi played a minor role, the viewers saw and remembered her.

But the real glory was ahead, and on the way to success, the actress did not neglect any ways of achieving it. Demi is one of the first stars to appear in magazines, being in an advanced state of her pregnancy. She showed the stunned readers of Vanity Fair magazine a photo session, where she was completely naked. Then Moore was 7 months pregnant. Since then, the actress used shocking and scandalous events to attract attention. In 1992, she posed nude for a magazine again, but this time she used a men's jacket and hat.

In 1993, Demi Moore played in the film Indecent Proposal. She appeared in the image of a married lady, who gets in touch with the billionaire with her husband's permission. The actress got the MTV Movie Award. However, she won it not for professional skills, but for the most beautiful on-screen kiss.

The subsequent roles were no less provocative. In the film Disclosure, Demi Moore played an emancipated careerist, a woman for whom cynicism, business acumen, and money completely replace morality. It was released in 1994. Demi continued to shock viewers in the film The Scarlet Letter. She played a young temptress of a priest. She was punished for this. The woman was obliged to wear a mark on her clothes till death. It was a scarlet letter symbolizing shame and sinfulness.

The actress becomes a symbol of feminism after these movies. Demi Moore highly appreciates her talent. For example, she demanded $ 12 million for play in the movie Striptease. None of the stars requested such a sum before 1996. The actress prepared for work in this movie thoroughly. She did several plastic surgeries. Demi did not hide the surgery and even advertised her new appearance due to love for shocking. She really looked refreshed and seductive in the film, which did not stop film critics from earmarking her the Worst Actress of 1996.

However, failure did not shake Demi Moore’s self-esteem. The actress continued to be in demand. She was offered roles of resolute and emancipated heroines, who could defend their interests no worse than stronger men. We can see it in the sensational movies G.I. Jane, where Demi Moore played a female soldier of special forces. The actress shaved her hair for shooting in this film.

Soon, the career of one of the most expensive Hollywood stars was in a slump. The actress could draw attention to herself in 2003. She appeared in the movie Charlie's Angels: Full Throttle, playing a bad angle. 41-year-old Demi showed her fans an excellent figure, appearing in a revealing bikini. The actress visited the plastic surgeon before shooting again. Demi Moore played a capricious star and alcoholic in the film Bobby after a vicious angel.

In 2004, two more movies were released. They were favorably received by viewers and film critics. These are the films Flawless and Mr. Brooks. There is the spirit of feminism in these projects, as well as in all previous films with the participation of the Hollywood star.

In the early 1990’s, Demi Moore founded her own Moving Pictures company. Moore produced the movies Now and Then and If These Walls Could Talk, which caused contradictory critics’ reviews.

The latest projects with Demi Moore are the films The Joneses and No Small Affair.

The actress married Bruce Willis two years after the divorce with rock musician Freddy Moore. The couple lived in marriage for 13 years. They had three daughters Rumer Glenn, Scout LaRue and Tallulah Belle. The youngest daughter was born in 1994.

Demi Moore married a third time five years after the divorce with Bruce Willis in 2005. Her husband was actor Ashton Kutcher. At first, a considerable age difference (Kutcher is 16 years younger than Moore) did not affect the relationship between the couple. Demi even changed her name to Kutcher. But in 2011, the marriage began to crumble. Demi officially stated that she was breaking with Ashton. The cause of the break is the one-night stand of the actor with 22-year-old Sara Leal, who told journalists about the details of the night spent with Kutcher without any hesitation.

In 2012, Kutcher filed for divorce. Demi Moore overcame this break very painfully. Officially, the divorce was completed in November 2013. 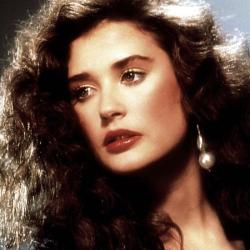