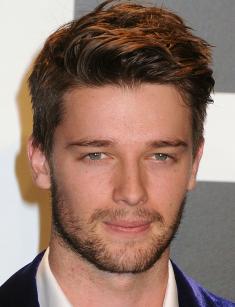 Patrick Schwarzenegger is known primarily as the son of the famous father, Arnold Schwarzenegger, a Hollywood actor and legendary Terminator. But it seems that such a status is not enough for the young man, so he makes all to come in from the cold of his father.

Patrick, a guy with an attractive appearance, first became famous as a model. But recently, a rising Hollywood star has made the first confident steps in cinema. In the 2000s, he appeared in such notable projects as Grown Ups 2, Scream Queens and Scouts Guide to the Zombie Apocalypse, where Schwarzenegger Jr. played though not key but bright roles. And in 2018, Patrick got the first major role and attracted the attention of the audience.

Patrick was born in September 1993, in Los Angeles in the family of Hollywood stars. He is the third child and first son of the actor and 38th Governor of California, Arnold Schwarzenegger, and Maria Shriver, a journalist.

When the first son was born, the family already had older daughters, Katherine Eunice and Christina Maria Aurelia. And when Patrick was four years old, he had two brothers, Christopher Sargent and Joseph Baena, a paternal half-brother.

Patrick has famous relatives from the mother's side, a member of the Kennedy family. His grandmother was the sister of John F. and Robert Kennedy. The woman became famous for charity activities and the fact that she founded Special Olympics, the games for mentally disabled people.

His grandfather, Maria Shriver's father, is no less known. He was Sargent Shriver, the first director of the Peace Corps and the United States Ambassador to France. He ran for Vice President of the United States from the Democratic Party.

The scandal that broke out in the star family in 2011, when information about the illegitimate child of his father and a housekeeper got out, hurt the pride of 17-year-old Patrick. The young man even disowned his father, leaving only the mother's surname, a part of his full name. But it seems to be done it somewhat formally, only in social networks.

Patrick Schwarzenegger received primary and secondary education in a private school Brentwood. Studying in this school costs $35 thousand per year. In 2012, the young man became a student at the University of Southern California. His studies were also paid.

Patrick took the best from his parents' appearance. With a height of 5'11'' (180 cm), he has an athletic build, regular facial features, and expressive gray eyes. As a teenager, the guy took his first steps in the modeling career when he became the face of the youth brand, Hudson Jeans. The billboards ads of jeans with Patrick appeared on the famous Sunset Boulevard in Los Angeles.

At the age of 15, the young man with the help of his parents founded the company Project360 which produces a line of men's clothing and donates 10% of the profits to charity. Soon Patrick Schwarzenegger signed a contract with LA Models. The agency announced its plans to engage the model in advertising companies for Armani and Ralph Lauren. The young man admitted that with advertising clothes of famous designers he hopes to promote his own brand.

Patrick Schwarzenegger first appeared in a movie when he turned 13. The comedy The Benchwarmers by Dennis Dugan with Rob Schneider in the title role premiered in 2006. Patrick appeared in the episode where he played Jock Kid, a young baseball player.

The actor again appeared on the set in 2012, six years after his debut. Patrick Schwarzenegger starred in the drama Stuck in Love. Patrick was lucky this time as the director gave him the secondary role. Stephen King played himself in the movie.

A year after, 20-year-old Patrick attracted more attention. The young actor appeared in the sequel of the bright comedy Grown Ups 2 with Adam Sandler in the title role. Schwarzenegger played Frat Boy Cooper. On the set, Patrick worked with many well-known actors. The list of the cast included Salma Hayek, Kevin James, Steve Buscemi, and Shaquille O'Neal.

In 2016, Schwarzenegger Jr. continued to make a film career and appeared in the melodrama Dear Eleanor, where he played a secondary role.

A handsome guy with a model appearance has an army of female fans. He also attracts the attention of Hollywood stars. In 2012, Schwarzenegger Jr. was noticed with Taylor Swift at the celebration of Independence Day.

In 2014, Patrick Schwarzenegger was dating bright and flighty Miley Cyrus. But their relationships did not last long, and in the spring of 2015, the couple broke up. At that time, the actor engaged in the filming of Midnight Sun, and tabloids spread rumors that Patrick had a romantic relationship with Bella Thorne. Supposedly Miley was jealous of her. But the rumors turned out to be just a journalistic invention.

The one Patrick "replaced" Cyrus with fans and paparazzi saw in 2015. Patrick Schwarzenegger appeared in public with a beautiful blonde, who turned out to be Abby Champion, a 19-year-old model from Alabama. The couple was seen walking in Los Angeles. Young people held hands and did not hide their feelings.

Abby was the one who posted the first common photos on Instagram. Patrick Schwarzenegger held Abby in his arms. In March 2016, the couple spent together a short vacation in Mexico. Patrick and Abby posted photos of them together on the pages of Instagram at the same time.

In 2017, the audience saw Patrick Schwarzenegger in two projects. These are the movies Go North and The Long Road Home. The audience appreciated Patrick's characters, Caleb and Sgt. Ben Hayhurst, and film critics noted the professional growth of the actor and his keen playing of the characters.

Film directors also noticed this arising actor. Scott Speer gave Patrick Schwarzenegger the lead role in the romantic drama Midnight Sun, which premiered in 2018. The duet of Patrick and his partner, brilliant Bella Thorne, were the key to success. The famous Hollywood actor and comedian Rob Riggle played the role of Bella's on-screen parent.

The melodrama is based on the Japanese movie of the same name released in 2006. The project was filmed in Vancouver.

Net worth is $6 million.