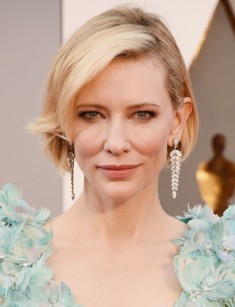 Cate Blanchett is a brilliant Hollywood actress, the winner of many prestigious awards. The audience loved her after the roles of Queen Elizabeth I in the dramas “Elizabeth” and “Elizabeth: The Golden Age,” elf leader Galadriel in the three movies “Lord of the Rings” and “Hobbit,” and many others.

Catherine Elise Blanchett known and loved by millions as Cate Blanchett was born in Melbourne in spring 1969.

The girl’s father was the Navy officer from Texas Robert DeWitt Blanchett. As he resigned, he fell in love with a school teacher June from Melbourne and moved to Australia for his beloved one to take up advertising business. The couple had three children: the first one was Bob, then Cate was born. After the third child Genevieve was born, Robert died of a heart attack.

The responsibility to look after the children fell on June. At that time, Cate was 10. The family tragedy and financial ordeals that followed soon made young Cate Blanchett grow up fast. The mother was working hard while Cate looked after her small sister and helped keep the house.

As Blanchett said later, she was fond of theater at school, but the necessity to have a steady job and support her mother prevailed over the young woman’s dreams. Cate entered one of the Melbourne universities and chose economy as the major, yet the world of figures was so strange to Blanchett that she gave in to the impulse and quitted her studies. Terrified with what she had done, the young woman went to travel to England.

After the journey, Blanchett had no money and went to Egypt. To earn some money, she agreed to make money as an extra in some Arabic movie project. It looked like the life itself sent Blanchett the sign where she should move.

Cate Blanchett’s career began at the theater stage; she was successful from the first moments. After her graduation, Blanchett was accepted to the Sydney Theater Company troop and debuted in the play “Top Girls.”

Blanchett adored theater, but she had to have breaks because she was busy with movies. In the mid-1990, the actress was offered to take part in several Australian TV projects. Cate was torn between the TV setting and theater where the plays “Hamlet,” “Sweet Phoebe,” “The Blind Giant is dancing,” and “The Tempest.” After the end of the theater season, Blanchett took a time-out at the theater.

The actress came back in 1999. She took part in two performances at Old Vic Theater in London: “Plenty” and “The Vagina Monologues.” The latter play is notable for the starry cast: Julianne Moore, Kate Winslet, Gillian Anderson, and Melanie Griffith.

The next break lasted for 5 years. After that, Blanchett played the main character in “Hedda Gabler” based on Henrik Ibsen’s book.

Cate Blanchett’s movie career successfully began in the home Australia. In 1997, the actress took part in three projects. She played the nurse Susan Macarthy in the drama “Paradise Road.” For her work in the romantic comedy “Thank God He Met Lizzie,” Blanchett got the first awards: AFI Best Actress Award and the Film Critics Circle of Australia Award.

The third movie that brought Cate much luck was the American project. The director Gillian Armstrong insisted the unknown in the US actress should take the leading part. The producers resisted at first but had to give in as Armstrong kept persuading them. This is how Blanchett appeared in the historical melodrama “Oscar and Lucinda,” her first Hollywood work.

Initially, the movie was not created for the mass audience and brought modest profits: only $2 with $12 million spent. However, critics appreciated the Australian actress’s skills.

Blanchett became globally famous in 1998 when she played Elizabeth I in Shekhar Kapur’s historical project and collaborated with Joseph Fiennes, Geoffrey Rush, and Vincent Cassel. The drama “Elizabeth” glorified the actress and brought the first Academy Award nomination and the prestigious Golden Globe Award and BAFTA. After the movie came out, the press was full of excited reviews on the movie and Blanchett’s acting.

Soon, many other successful Hollywood works with the Australian actress appeared: the melodrama “An Ideal Husband,” the comedy “Pushing Tin,” the thriller “The Talented Mr. Ripley,” and the drama “The Man Who Cried” where Blanchett represented the Russian cabaret dancer Lola. All these projects were popular among the audience and movie critics.

The mysterious thriller “The Gift” where the actress played the psychic Annabelle got less positive reviews. However, the movie grosses were good: the movie creators collected $44 million. With all that, most critics agreed it was Blanchett’s professional acting that kept the movie popular.

The Australian actress also appeared in the movie trilogy “Lord of the Rings” and pleased the audience with the figure of the magnificent Galadriel, the mighty elf queen.

Together with the first movie of the iconic trilogy, the movie “Charlotte Gray” that told the story of female agents’ deeds during the occupation was released.

After several ordinary movies that the audience did not like much, new successful projects followed: “Veronica Guerin,” “The Missing,” and “The Life Aquatic with Steve Zissou.” However, the biographical drama “The Aviator” by Martin Scorsese was the most outstanding work; Blanchett played the lover of Howard Hughes, the playboy, director, and pilot. The secondary role brought Cate Blanchett her first Academy Award and other prestigious prizes.

In 2007, Cate came back to the role of Elizabeth I in the historical drama “Elizabeth: The Golden Age.” The new movie brought new honorable nominations.

The actress personified an interesting character in the drama “The Curious Case of Benjamin Button”: she played Brad Pitt’s character’s lover. The movie tells the wonderful story of a man named Benjamin Button who looked like an 80-year-old man when he was born, and his health condition was corresponding. However, he was gradually becoming a young, handsome man in the course of time.

The second Oscar was brought by the role in the popular movie “Blue Jasmine” (2012) by the genius director Woody Allen. The drama appeared on the big screen the next year. Critics believed it was the actress’s best work; she was awarded Oscar and all major movie prizes.

In 2012, Blanchett also appeared as the charming elf queen Galadriel in the movie “The Hobbit: An Unexpected Journey.” The beauty appeared in the next two movies as well.

Cate Blanchett tried herself as a voicing actress: Valka, one of “How to Train Your Dragon 2” characters, was voiced by the actress.

In 2015, Blanchett starred in the drama “Carol.” The main characters were played by Cate and the new Hollywood star Rooney Mara. The movie premiere took place in Cannes and brought Blanchett new nominations for the most important awards of the movie world.

In the fairy tale “Cinderella,” the actress turned into the cruel stepmother of the main character. Later on, Cate demonstrated her fascinating talent in the drama “Manifesto” where she recited various manifests. As she was reciting a particular text, she was turning in one of the characters; overall, Blanchett played 13 characters.

Cate Blanchett is a boring person for those who enjoy scandals and rumors. The actress has nothing even close to a scandal. In December 1997, Cate married the script writer and movie editor Andrew Upton; the couple had been dating for a year before. Cate and Andrew met at a movie set; since that time, they have never parted.

Upton is not a handsome macho or a genius. However, the spouses’ relationship may be considered ideal in the Hollywood world of scandalous divorces and complicated intrigues. The couple became friends thanks to their common tastes in literature. Andrew has always supported his wife and never exhausted her with jealousy or job-related envy.

Blanchett and Upton have three sons: Dashiell John, Roman Robert, and Ignatius Martin. The youngest son was born in 2008. In spring 2015, the couple adopted the girl Edith Vivian Patricia.

Cate Blanchett is the Hollywood icon. She has no bad habits, does pilates, and plays tennis. From time to time, she also practices “the holistic detoxication”: it is a special diet when red meat, dairy products, fruits, starches, alcohol, and chocolate are excluded for 21 days.

White skin and red lipstick are the actress’s signature. She does not go to the gym and says that children are the best fitness club. Besides, she has enough physical activities at movie sets.

There is a popular Instagram blog where the actress’s photos are posted. However, it has no official verification, so the account is likely to be managed by the star’s fans.

In fall 2017, Blanchett represented Hela, the goddess of death, who challenged Thor himself. The situation got particularly difficult for Odin when the woman managed to break Mjölnir, the powerful god’s hammer.

In 2018, the audience will see 4 movies with Cate Blanchett.

In April, Cate Blanchett, Sandra Bullock, Anne Hathaway, and Sarah Paulson presented the long-awaited crime comedy “Ocean's 8.” The movie tells the story of Debbie Ocean, Danny Ocean’s sister who emerged from jail. The woman creates a team to rob Daphne Kluger’s neck during the party at the Metropolitan Museum of Art.

In the upcoming adventure movie “Mowgli,” the actress voiced Kaa.

Apart from the thief and snake, Blanchett will appear in the fantasy horror movie “The House with a Clock in Its Walls” as the witch who has to find the clock measuring the time until the end of the world. Jack Black and Owen Vaccaro starred in the movie as well.

Later on, Blanchett will appear in the comedy drama “Where'd You Go, Bernadette?” where she had the leading part.

The third part of the cartoon “How to Train Your Dragon” is scheduled on February 2019. Cate will come back to voicing Valka.

The movies “Lucy and Desi,” “Cancer Vixen,” “Blackbird,” and “Indian Summer” are still being produced; the actress will play the main characters in all of them. 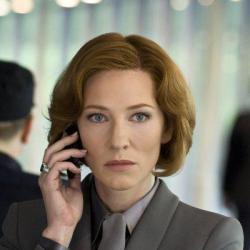