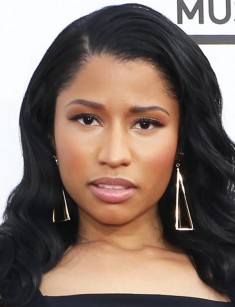 Curvy shapes, bright colorful wigs, fabulous dresses – Nicki Minaj keeps surprising her admirers. Minaj is a singer, an author of the songs and an actress. In her creative biography, the singer has four studio albums, mixtapes, joint albums, tens of singles and fifty video clips of other stars of pop music in which Minaj has participated as the invited star. Nicki succeeded to become the richest female rapper, but it wasn’t always like this.

Onika Tanya Maraj (the real name of the singer) was born on the 8th of December, 1982 in Saint-James. The singer's father is African, her mother is Indian. Nicki tries not to remember her childhood because there was hardly anything pleasant in it: the girl's father was an alcoholic and a drug addict. In a drunken rage, he often beat his wife, and once he had set fire to his own house. By the miracle, Nicki and her mother had survived.

The family lived in poverty, it was impossible for them to save up money so that they could move to the USA. Several years Nicki Minaj had been living with her grandmother. When the girl was five years old, she was taken away by her mother and they escaped from their despot to Queens.

The girl suffered from their moving and looked for rescue in the music. At school Nicki was fond of the clarinet, then she began to develop her vocal abilities. Nicki painted, participated in school performances, but always dreamed of the big scene. At the teenage age Nicki Minaj – a black girl from the dysfunctional family, began to listen to rap music - the musical genre which had defined her future.

The mixtape "Playtime Is Over" which was released in 2007 became the debut work of Nicki Minaj. In 2008-2009 Nicki released some more demo discs which, unfortunately, weren’t noticed by the public. The rapper Lil Wayne liked the creative work of the rapper, and the musician risked to sign the contract with the young performer.

Soon there was released the first album of Nicki Minaj "Pink Friday", after which she became famous overnight. The single "Your Love" became a hit. Next, Nicki presented one more single "Right Thru Me": the music video to this song revealed the singer as a talented drama actress.

At first, Minaj had been using an image of the Japanese geisha, but when it wasn't actual anymore, she had changed her role. In her third song video "Moment For Life," she appeared as the Cinderella of hip-hop.

From this point, Nicki Minaj began to shoot music videos for her songs. The appearance of the actress, choreography in the scandalous style of twerk, multi-colored hair and her underlined sexual figure bring extreme popularity to her music videos. In general, there were four music videos released by Minaj. Further, the singer presents up to ten videos a year.

The track "Super Bass" became the most successful for all career of the singer. He has instantly rushed in TOP-10 and kept at the top of it for a long time. This explosive hit gained 250 million viewings on YouTube.

In summer of 2011, Nicki recorded the duet with the DJ David Guetta. Their work "Where Them Girls At?" became a hit as it was predicted.

During the whole year, Nicki Minaj presented new songs from the forthcoming album, but all the novelties turned out to be the failure – the composition hadn't got to the charts, the critics spoke negatively of her album. This failure had forced the singer to postpone the date of her new album’s release, having added the compositions of neutral content: even the most devoted fans of Nicki hadn’t approved of lots of negative in her track. She succeeded to carry out what she had had in her mind – the compositions from this album sounded at all discos.

Nicki Minaj is the only rapper who was invited to perform at Grammy ceremony: at the 54th Annual Grammy Awards ceremony she sang a hit "Roman Holiday". It was for the first time in the history of this prestigious event.

In May 2014 the singer recorded her first track of the forthcoming new album "Pills N Potions", and in August Minaj released the second single "Anaconda". The song "Anaconda" reached the second line of the national USA chart and became an indisputable hit. In December 2014 Nicki Minaj presented her album "The Pinkprint".

In 2015 Nicki released the track "Hey Mama". The composition became a world hit, the refrain of "Hey Mama" song didn't leave radio frequencies, and the track had surely taken high positions in the musical tops.

Today Nicki Minaj is the performer of rap music whose singles are released in millions of copies. She is known all around the world, the world stars want to perform with her in a duet.

Almost nothing is known about the private life of the popular rapper. The journalists and paparazzi didn't manage to find something interesting, and admirers and haters, having analyzed her texts, came to the conclusion that Minaj was bisexual.

In April 2015 Nicki Minaj reported to the fans that she was engaged to the rapper, Meek Mill. The singer took the photo of the ring presented to her and she posted the photo on her Instagram.

She got acquainted with Meek in February of the same year, their relations developed quickly – the couple often appeared in public together. In July Minaj broke off the engagement and returned the ring to her boyfriend. The friends of the couple say that they often quarreled, separated and then reunited. Meek said that Nicki suppressed him, constantly told him what to do. But also there was some information about lies of and unfaithfulness of the groom which led to the break-up of the couple.

Nicki Minaj is often compared to Lady Gaga for her extravagant dresses. Minaj loves outspoken and non-conventional outfits, cooperates with Donatella Versace and other famous couturiers, but the rapper considers that she has nothing in common with Lady Gaga. Nicki explains her choice of clothes with her difficult childhood: when her parents had quarrels, she thought out various characters and was living their life.

The singer adores tattoos. On her left hand, she has hieroglyphs which mean - "God is always with you".

The bright style of Nicki attracts admirers to the page of the singer on Instagram. Minaj has 80 million subscribers on this platform at her verified account. Her fans admire the singer's figure in open dresses which are preferred by Minaj, they also monitor the changes of the image of the celebrity: Minaj dyes her hair in pink, lime, and other colors.

Exceptional forms of Nicki Minaj give a reason to ill-wishers to claim that the singer had made plasticity of buttocks. According to the press, at the beginning of the career, Minaj had had plastic surgery before and after which her figure differed radically. The singer denies rumors about plasticity and refers to heredity in this question.

In 2015 Minaj told her admirers that she wanted to lose weight. With a height of 157 cm, the singer weighs 62 kilograms. Her fan community became nervous, that Minaj's pride loved by admirers – an impressive outstanding bottom, as it had appeared, was under the threat. The photoshoot of the actress in a swimsuit calmed her fans: Nicki's figure was the same, her womanly forms hadn’t disappeared.

In 2016 Nicki Minaj recorded the track "Side To Side" in support of the studio album of Ariana Grande "Dangerous Woman" The composition became the third song in support of her colleague's album.

The same year Nicki Minaj again acted as an actress and played in the picture "Barbershop 3".

At the beginning of 2017, Minaj presented the song and the video "No Frauds". Together with Nicki, the composition was performed by Drake and Lil Wayne. In spring of 2017, the singer released the music video on the track "Swalla" of the same name which was recorded together with Jason Derulo.

Also in 2017, the singer recorded other singles "Kissing Strangers", "Run Up" and "Make Love" which were released without the album. Compositions were created in collaboration with other musicians. 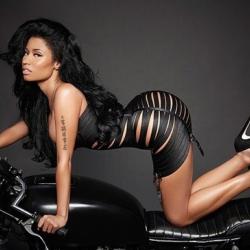