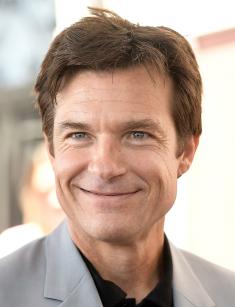 Jason Bateman is an American actor, who became famous thanks to diverse roles in comedic projects Horrible Bosses, Disconnect, Fast Track, Arrested Development and Bad Words. At the moment, there are 88 works in the filmography of the actor and this number increases every year.

Jason Bateman was born on January 14, 1969, in a suburb of New York City. The artist's mother worked as a flight attendant, and his father was a director. It is known that Jason has a sister Justine, who also became an actress as an adult.

When Jason was four years old, the Bateman family moved to Salt Lake City and finally moved to California after a while. The boy began to show interest in creativity at a young age. At the age of 12, he went to the casting and he was lucky at the first attempt.

In 1981, Jason made his debut in the series Little House on the Prairie. The project, which was aired nine seasons and nominated for the Emmy Awards repeatedly brought the future Hollywood to star his first fame.

Until the end of the 80s, Jason was involved in ten TV shows and TV projects but the novice actor got the main role in the feature comedy Teen Wolf Too only in 1987. However, the debut was very controversial. The director of the project tried his best but the critics did not appreciate the movie and creators spent on creating the film more than earned in the end.

In 1988, Bateman appeared in the crime thriller Moving Target. His next major work was in 1991: it was a role in the comedy Breaking the Rules. A year later, the director Lou Antonio gave Jason the main character in the dramatic thriller A Taste for Killing. Blaine Stockard, who Bateman played, along with a childhood friend went to practice at the oil rig. There was a series of cold-blooded murders there.

In the period from 1994 to 1999, the actor was approved in a comedy role, which contributed to the role in the films Black Sheep, Chicago Sons, George & Leo, Down with Love.

Since 2003, he has been busy on the set of the series Arrested Development, in which the artist played Michael Bluth, a member of the wealthy family Bluth, leading an extremely extravagant lifestyle. The series brought to the actor a Golden Globe in the category Best Performance by an Actor in a Television Series – Drama.

After two years, Bateman was nominated for the Emmy Awards. After that, Jason removed the polyps from his throat, so he was forced to take "sick" for a year. Having gained strength, he starred in 3 films at once: The Break-Up, Smokin' Aces and Fast Track in 2006.

The beginning of 2010 was marked for Jason by a fast rise in his popularity. He had the role of the secret agent Lorenzo Zoil in the comedy Paul, telling about the adventures of two friends, who made friends with the alien.

Then, in 2011, Jason and Ryan Reynolds played in the classic comedy about changing bodies The Change-Up. The star of the movie Green Lantern turned into a slob and heartthrob Mitch and Bateman played Dave, a successful lawyer and an exhausted family man.

Success was the role of Nick Hendrix from the movie of Seth Gordon's Horrible Bosses, in which, besides him, Jennifer Aniston starred. He tried to deal with his crazy, narrow-minded or sexually anxious bosses together with Charlie Day and Jason Sudeikis. In 2014, a sequel of this comedy was released. The trio of bosom friends decided to take the place of bosses this time but they found trouble on their head.

In 2015, the master of reincarnation sat in the director's chair, giving life to the comedy The Family Fang, which introduced the audience to the difficulties of the life of star parents. It is noteworthy that Bateman moved away from the usual comedic images briefly and took part in the filming of the thriller The Gift the same year. The movie told about a simple family man, who turns the life upside down after the visit of his old friend.

In 2016, Jason voiced the fox Nick Wilde in the cartoon Zootopia and there was the release of the comedy Central Intelligence after a couple of months, in which the artist turned into Trevor. His partners on the set were Dwayne Johnson and the famous comedian Kevin Hart.

Since 2001, Bateman's own life has not changed significantly. Then the famous actor tied the knot with actress Amanda Anka. In late October 2006, his wife gave her husband a daughter, whom happy parents called Francesca.

In February 2012, the girl had a sister Nora. It is known that the master of reincarnation devotes all the free time to raising daughters, although he rarely appears at home because of his constant filming.

In 2017, a crime-drama television series Ozark was released, in which Bateman played the main role. Jason Bateman has an estimated net worth of $30 million.

The financial consultant Marty Byrd (Jason Bateman), his wife Wendy (Laura Linney) and children – Charlotte (Sofia Hublitz) and John (Skylar Gaertner) are in the center of the plot. The head of the family carries his family from the suburbs of Chicago in the summer vacation center, the town of Ozark. The reason for the move lies in the fact that Marty laundered the money of the Mexican drug baron and the man owed the mafia boss a large sum of money when the scheme was closed.

Jason, along with Stephanie Courtney, Ben Falcone, Rachel Duguay starred in the comedy series Nobodies the same year. There are three main characters: Hugh, Larry and Rachel, who are in the center of crazy, booming events. They are friends all their life and achieves their goals together. The friends are comedians and actors, who try to gain recognition by any means and declare themselves on the whole world.

It is known that the filmography of the famous actor, who is 5,9 feet (180 cm) tall, will be supplemented by the movie Game Night in 2018. There are couples in the center of the story of the movie, who periodically meet in order to relax. The first team invents and plays a story of kidnapping or murder and the second investigates the incident.

Adults use such games for having fun and spend their time with friends. However, something happens that was not part of their plans. One of the fictional victims of the game dies, and the couple has to figure out what happened and who is to blame for the death of a friend.

Despite the tight schedule, the artist does not forget about his fans. Bateman posts his photos from film screenings regularly, as well as video clips from his rest on "Instagram." It is worth noting that social networks are not the only resource that tells fans about the latest news from Jason's life. The information about a Hollywood star is also often published on Internet portals and in print media.