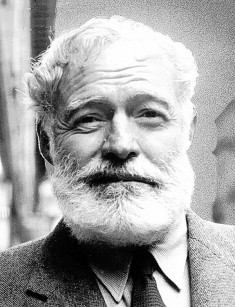 The Nobel Prize winner, Hemingway was the popular foreign author whose works were most frequently translated into Russian in the Soviet Union. Earnest’s works were published in magazines “30 Days,” “Abroad,” “International Literature,” and others; this talented person was called “the literary master number one” in European countries.

The great writer was born in America, on the South-West coast of Lake Michigan not far from the Midwest cultural capital Chicago, in the provincial town Oak Park. Earnest was the second of the six children in the family. The boy was brought up by the wealthy parents who, however, were not involved in literature: the popular actress Mrs. Grace Hall Hemingway who left the stage and Mr. Clarence Edmonds Hemingway who devoted his life to medicine and sciences.

Miss Hall was a quirky woman: her clear voice sounded in many cities of the United States before she married, but she left the job because of stage lights intolerance. When her career ended, she blamed anybody but herself. As this interesting woman accepted Hemingway’s proposal, she lived with him for all her life and spent her time on the children’s upbringing.

However, Grace remained a weird and extravagant woman even after the marriage. Ernest was wearing girls’ clothes and hair bows until 4 because Mrs. Hemingway wanted a girl, but the second child turned out to be a boy.

In his spare time, the therapist Clarence loved hiking, hunting, and fishing with his son. When Ernest turned 3, he got his own fishing rod. Later, the child’s impressions related to nature were reflected in Hemingway’s stories.

In his youth, Hem (the writer’s nickname) read classic literature passionately and created his own stories. At school, Ernest debuted in the local newspaper as a journalist: he wrote short articles about the events, concerts, and sports competitions.

Although Ernest went to Oak Part local school, he described North Michigan more often in his works. It was a picturesque place where the boy spent his holidays in 1916. After this trip, Erny wrote the hunt story “Sepi Jingan.”

In addition, the future literature laureate was athletic: he was fond of football, swimming, and boxing; the latter played a cruel joke on the talented young man. Because of a trauma, Hem’s left eye went almost blind, and he also had his ear damaged. For this reason, the young man could not join the army for a long time.

Erny wanted to become a writer, but his parents had different plans for their son’s future. Clarence dreamed that his offspring would follow in his footsteps and graduate from a medical university, and Grace wanted to bring up the second Schubert or Beethoven and imposed on the child the music classes he hated. The mother’s whim influenced Hem’s studies: with his daily cello classes, he missed a year of compulsory classes. “She thought I had abilities, and I had no talent,” said the writer when he was already old.

When Ernest finished school, he did not try to enter the university. Against his parents’ will, the young man began to master journalism in the Kansas City newspaper “The Kansas City Star.” The police reporter Hemingway encountered deviant behavior, disgrace, crimes, women’s prostitution; he went to crime scenes, fires, and various prisons as a part of his work. Still, this dangerous profession helped Ernest: he watched people’s behavioral manners and listened to their daily dialogues devoid of metaphorical delicacies.

After the classic took part in battles in 1919, he moved to Canada and returned to journalism. His new employer was the newspaper “Toronto Star” that gave the talented young man the opportunity to write the materials on any topic. However, not all of his works were published.

After the quarrel with his mother, Hemingway took his things from the native Oak Part and moved to Chicago. He continued to cooperate with Canadian newspapers and simultaneously published notes in Co-operative Commonwealth.

In 1921, Ernest Hemingway fulfilled his dream and moved to the city of love, Paris, after his marriage. The French impressions were reflected in the memoir “A Moveable Feast” later.

In Paris, he met Sylvia Beach, the eminent owner of the bookstore “Shakespeare and Company” not far from the Seine. This woman had a great influence in the literary circles – it was Beach who published the scandalous novel by James Joyce “Ulysses” that was banned by the American censorship.

Hemingway also made friends with the famous writer Gertrude Stein who was wiser and more experienced than Hem and considered him to be her student for all her life. The extravagant woman treated journalists’ art disdainfully and insisted that Hemingway should be engaged in literature more.

The master’s triumph happened in fall 1926 after the novel about the lost generation “The Sun Also Rises” (“Fiesta”) was published. The protagonist Jake Barnes (Hemingway’s prototype) fought for his home country. He was seriously injured at war which made him change his attitude toward life and women; that is why his love for Lady Brett Ashley was platonic. Jake cured his spiritual wounds with alcohol.

In 1929, Hemingway wrote the iconic novel “Farewell to Arms” that is included in the list of must-read books at schools and universities nowadays. In 1933, the master created the collection of short stories “Winner Take Nothing.” In 1936, the magazine Esquire published the famous work “The Snows of Kilimanjaro” that told the story of the writer Harry Smith who was searching for the meaning of his life during his safari trip. Four years later, the war book “For Whom the Bell Tolls” came out.

In 1949, Ernest moved to sunny Cuba where he continued his literary work. In 1952, he created his philosophical and religious novella “The Old Man and the Sea” for which he was awarded the Pulitzer and Nobel Prizes.

Ernest Hemingway’s personal life was so rich in various events that a whole book would not be enough to describe all the adventures of the great writer. For example, the master enjoyed adrenaline rush: in his youth, he could get tough with a bull when he was participating in bullfights; he was also not afraid of a lion.

It is known that Hem loved women’s company and was amorous: if a familiar girl demonstrated her intelligence and refined manners, Ernest would be immediately fascinated by her. Hemingway created the image of some Marquis de Sade and said he had a lot of lovers, prostitutes, and black concubines. Whether it was imaginary or not, the biographical facts demonstrate that Ernest had many partners indeed: he loved them all, but he called all his marriages grave mistakes.

Ernest’s first lover was the pretty nurse Agnes von Kurowsky who took care of the writer in a hospital when he was injured in the First World War battle. This light-eyed beauty became the prototype of Catherine Barkley in the novel “Farewell to Arms.” Agnes was seven years older than Ernest, had mother feelings for him, and called him “baby” in her letters. The young persons wanted to marry, but these plans were not to come true: the light-headed girl fell in love with a famous lieutenant.

The second partner of the literary genius was the red-haired pianist Elizabeth Hadley Richardson who was 8 years older than her partner. Although she was not beautiful, she supported Ernest in his activities by all means and even gave him a typewriter as a present. After the marriage, the newlyweds moved to Paris where they had to live hand to mouth at first. Elizabeth gave birth to Hem’s first child John Hadley Nicanor.

In France, Ernest frequented restaurants and enjoyed coffee in the company of his friends. The socialite Lady Duff Twysden was among his acquaintances; she was self-entitled and could stomach a swear word. Despite this provocative behavior, Duff was popular among men, and Ernest was not an exception. Still, the young writer did not dare to cheat on his wife at that time. Twysden was “turned” into Brett Ashley from the novel “The Sun Also Rises.”

In 1927, Ernest got attracted to Elizabeth’s friend Pauline Pfeiffer. Pauline did not appreciate her friendship with the writer’s wife – on the contrary, she was doing everything to conquer another woman’s husband. Pfeiffer was pretty and worked in the fashion magazine Vogue. Later, Ernest said that the divorce with Richardson was the greatest sin in his life: he loved Pauline, but he was not really happy with her. Two Hemingway’s children, Patrick and Gregory, were born in the second marriage.

The US-famous correspondent Martha Gellhorn was the laureate’s third wife. The adventurous blonde loved hunting and was never afraid of difficulties: she often shed light on important political news in the country and did the dangerous journalist job. After Ernest divorced with Pauline in 1940, he proposed Martha. Still, the couple soon broke up since Gellhorn was too independent for Hemingway who wanted to dominate over women.

The journalist Mary Welsh was Hemingway’s fourth partner. This sunshine blonde supported Ernest’s talent and helped with publishing issues in this the marriage; she became his personal secretary.

The 48-year-old writer met Adriana Ivnchich in 1947 in Vienna and fell in love with her, although the girl was 30 years younger. While Hemingway was attracted to the white-skinned noble, Ivanchich treated him more like a father and was just friendly. Mary knew about the husband’s affair and acted calmly and wisely; she understood that the flames in Hemingway’s heart were impossible to douse.

Life was always challenging Ernest and testing him to the limit: Hemingway survived in 5 accidents and 7 catastrophes, had injuries, fractures, and concussion. He also had the Siberian plague, skin cancer, and malaria.

Ernest suffered from hypertension and diabetes not long before his death; he was placed in the psychiatric Mayo clinic to be “cured.” The writer’s condition was deteriorating. Besides, he had a manic paranoia related to surveillance. These thoughts were making Hemingway crazy: he thought that any room, wherever it was, was equipped with tracker devices, and watchful FBI agents followed him everywhere.

The clinic doctors treated the master “classically” and used the electroconvulsive therapy. After 13 treatment sessions, psychotherapists deprived Hemingway of the opportunity to write because his vivid memories were erased by the electric shock. The procedures were ineffective: Ernest was more and more depressed and talked about a suicide. As the writer returned to Ketchum on July 2, 1961, he felt thrown to the curb of life and shot himself with the gun. 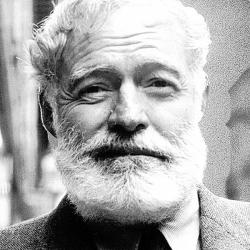