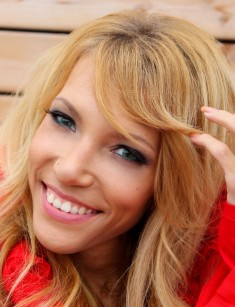 Yuliya Samoylova s a fragile girl with blond hair, delicate features, and an angelic voice. For the first time, Yuliya Samoylova appeared in the "Factor A" project. The girl won the hearts of people. She has a strong and beautiful voice and character. Yuliya went to the stage in a wheelchair. Even prima donna of the Russian stage Alla Pugacheva applauded. Already then, in 2013, many realized that Yuliya Samoylova was only at the beginning of her journey to popularity.

Yuliya Olegovna Samoylova was born in April 1989, in the Republic of Komi. The future singer spent her childhood and youth in Ukhta. Yuliya's parents Oleg and Margarita Samoylovy were born in different parts of the Soviet Union but met in the North.

The young family faced the typical for the late 80s difficulties. Oleg Samoylov, to support his family, worked as a fitter and then as a miner. Margarita also tried different professions. She worked as a waitress, a hairdresser, and a seller. Today the family has a successful business. Yuliya has a brother Zhenya and a sister Oksana.

In early childhood, Yuliya Samoylova was a healthy child. Everything changed after the unsuccessful vaccination - the girl couldn’t stand on her feet.

The doctors told that the baby would live not more than five years. The treatment did not help and Yuliya felt even worse. Then the parents wrote a refusal of treatment and the daughter felt much better.

A wheelchair, the first group of disability, Werdnig-Hoffmann disease didn’t stop Yuliya from becoming a singer.

In childhood, Yuliya Samoylova became interested in singing. The girl remembers her first concert till this time. When Yuliya was 4 years old, she sang Tatiana Bulanova’s song at New Year party. The girl touched the listeners and Ded Moroz so much that he gave her the main present - the biggest doll.

Since then, the creative biography of Yuliya Samoylova began. Firstly, her mother was engaged in music. When Yuliya turned 10, she sang at a charity concert, which was held in her native city. The song (the girl chose Valeria's hit "Airplane") was the final number. After that, Samoylova began decided to become a professional. She studied music with a talented teacher from the local Palace of Pioneers - Svetlana Valerievna Shirokova.

Since then, Yuliya Samoylova is a guest of various musical competitions.

When Yuliya turned 15, her favorite vocal teacher moved to another city. After that the girl became independent. She developed a "fighting" character: Yuliya learned to respond to all those who hurt her. Parents have taught the girl to defend interests and never complain. Yuliya Samoylova visited many competitions, participating on an equal level with other participants.

Yuliya Samoylova sang songs everywhere. Especially she liked rock: Yuliya created a rock band. But soon the girl realized that it is better to perform solo and got a job as a singer in a restaurant. Samoylova's repertoire consisted of different compositions - from the songs of Vladimir Vysotsky to Mikhail Krug's chanson. Soon the contingent of the restaurant changed: now listeners and music lovers from all over the district came to listen to Yuliya Samoylova. The reservation began two months before the event.

But Yuliya wanted more than singing in restaurants. The girl easily won the main prizes at the competitions. At the same time, people told that it will be almost impossible for her to make a career in show business. There was a period when Yuliya Samoylova decided to stop singing and entered the university at the faculty of psychology. Together with a man, Samoylova opened an advertising company. But it was not her destiny.

When Yuliya Samoylova won the Grand Prix at a local contest, the girl realized that it was not necessary fighting against herself.

A real breakthrough in her career happened when Yuliya Samoylova decided to take part in "Factor A". Yuliya made this step thanks to her parents and a boyfriend.

The girl got into the project easily. The first performance, was a sensation: Samoylova sang a song "Prayer"(Molitva). Before the performance she received instructions from Alla Pugacheva. Alla Borisovna said that Julia is obliged to sing perfectly. In the middle of the performance the judges Alla Pugacheva, Yuriy Nikolaev, Lolita and Roman Yemelyanov did not sit still and listened to the song standing.

Yuliya Samoylova took the second place, losing to Mali. Participation in the popular vocal show made the girl famous. After that, the singer no longer returned to her native Ukhta and stayed in Moscow. "Golden Star Alla" award, which was presented to Yuliya by Prima donna, was a motivation for her further development.

Yuliya Samoylova began to participate in various Moscow concerts and toured the country. But the greatest reward for the singer was the invitation to open the Winter Paralympic Games in Sochi at the famous Fisht" stadium ". Yuliya sang the song "We are together.

After singing songs at the Olympic Games she began working with the producer Alexander Yakovlev, whom she met at Factor A. In 2016, Yuliya Samoylova was invited as a special guest to the music show "Voice", where she presented the video "To live" along with Russian pop stars such as Grigory Leps, Polina Gagarina, Garik Sukachov.

She recorded the song by Igor Matvienko during a difficult period of her life. The girl had a complicated operation. But work on a new video inspired Samoylova. Soon the project with the same name started, the purpose of which was to help people who found them in a difficult life situation.

The rock singer Olga Kormukhina, who invited the young colleague to take part in the festival "Ostrov", made a huge impression on Samoylova.

Now Yuliya is also surrounded by many wonderful and talented people, including Alla Pugacheva, Roman Yemelyanov, Lolita, Mikhail Terentiev, Olga Kormukhina, Svetlana Nazarenko, and Gosha Kutsenko. Yuliya Samoylova accepted the offer of Gosha Kutsenko to sing along with him the song "Do not Look Back". For this New Year was made a bright video.

Singing along with Kutsenko, according to Samoylova, was not just easy but it turned out to be a real pleasure: the singers found a common language.

In March 2017, it became known that Yuliya Samoylova with the song “Flame Is Burning” became the representative of Russia at the Eurovision Song Contest in Ukraine.

According to the information, Leonid Gutkin became a co-author of Yuliya’s song. He wrote successful European songs for Polina Gagarina (Million Voices) and Dina Garipova (What If). The co-authors of the composition were Nett Nimrodi and Arie Burstein. They are the experts who "gave birth" to more than one song. The video for the song “Flame Is Burning” impressed a lot of people.

As it turned out, Yuliya Samoylova had been preparing for the contest for a long time. The preparation was kept in strict confidence. Therefore, people were surprised and even shocked.

The reaction was mixed. There were those who found the participation of the girl in a wheelchair as a desire to "pity" the audience. They talked about "speculation on prohibited methods."

But the majority met the news about Yuliya's participation in the Eurovision Song Contest with admiration because she is a really talented girl. After the release of the song Flame Is Burning, it took the eighth place according to bookmakers. The head of the Russian delegation at the contest, Yuriy Aksyuta, told that Yuliya Samoylova is a good singer, a charming girl and an experienced contestant who will be able to win the hearts of millions.

However, at the end of March 2017, the Security Service of Ukraine announced a decision to ban the entry of Russian participant of Eurovision to the territory of Ukraine. The EBU made a proposal to broadcast the performance of Yuliya Samoylova from Moscow. But in response, Russia refused to participate in the contest.

In the same year, the first album of the singer "Live" was released, which also included a new musical composition "Suddenly a Friend".

Yuliya Samoylova met Aleksei Taran in social networks. After a long correspondence and phone calls, they finally met. Since then, the couple has lived together for eight years. Yuliya and Aleksei are not officially married.

Aleksei Taran supports Yuliya, who is two years older than him. He also works as her administrator and tour manager. He follows the talented girlfriend everywhere. Thanks to him, Yuliya Samoylova got to "Factor A", which changed the life of the singer. Even then, the audience noticed how gently the man kept Yuliya’s hand.

The personal life of Yuliya Samoylova has developed happily, despite all the difficulties. The singer claims that sometimes for her boyfriend it is difficult because the character of the girl is not easy. The young man understands music; he is artistic and reads a lot. Looking at this couple, you understand that the relationship in it is based on love and deep understanding. According to Yuliya and Aleksei, they are going to get married. The singer often visits the church. In the autumn of 2017, the girl became a godmother for the third time.

In addition to the official website of Yuliya Samoylova, she has a YouTube blog, in which the girl posts short videos devoted to the events of her life.

In connection with the incident at the Eurovision Song Contest 2017 and the refusal of Yuliya Samoylova to participate in it, Russia announced the singer its representative at the 2018 contest. At the beginning of the year, there was a release of Samoilova’s new song “I Will not Break”, which collected 1 million views on YouTube. The authors of the song were Leonid Gutkin, Nett Nimrodi, and Arie Burstein. The direction of the video clip was produced by Alexey Golubev, who also is engaged in staging a concert performance of the singer.

Applications for participation in the contest were also left by the winner of 2009 from Norway Alexander Rybak and Israeli representative Netta Barzilai, who after the song Toy ("Toy") was declared the favorite of the musical competition.

The first tours of "Eurovision" will be held on May 8-9 in Lisbon, the final will be on May 12, 2018. The capital of Portugal for the first time became the venue for the international competition, thanks to the first place of Salvador Sobral and his song "Amar pelos dois". 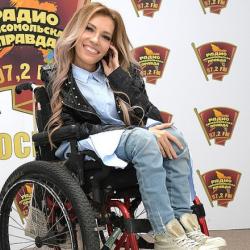