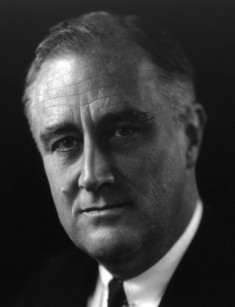 Franklin Delano Roosevelt went down in history as the 32nd US President who was elected for 4 terms in a row. The politician removed the country from the Great Depression, contributed to the work of the Allies of World War II, and promoted the foundation of the United Nations.

The would-be politician was born on January 30, 1882, in Hyde Park, New York, into the family of the respectable capital circle. The father James Roosevelt came from the Dutch family Rosenfeld who moved to the New World at the end of the 18th century. James was engaged in commerce and farming and had several transport and coal production companies. The mother Sara Delano also came from the old European family of French Huguenots. Their age difference was 26 years; it was James’s second marriage after he had been widowed. James Roosevelt’s son was of the same age as his father’s new wife.

Franklin was born when his father was 54. The parents tried to provide their child with everything. In addition to opera and ballet theater visits, the family often went to Europe together and also visited the sea coast in Maine where they went yachting. At 14, when Franklin got the wonderful home education, he entered the Groton School in Massachusetts. Later, the young man studied at Harvard; finally, he became the student of the Columbia University, School of Law. After that, Roosevelt started his law practice in a law company in Manhattan.

Franklin was the 26th US President Theodore Roosevelt’s relative, and he also wanted to take part in politics. The opportunity arose in 1910: the young lawyer was offered the position of the New York senator. Roosevelt won the elections and represented the Democrats in the local government legislative body. In the next year, Franklin accepted the offer of the Holland Lodge and joined the organization. Later, Roosevelt got the 32nd degree of the Scottish rite and joined the Grand Lodge of Georgia.

In 1912, Roosevelt took part in the US presidential election as the supporter of the Democrats’ candidate Thomas Woodrow Wilson; after Wilson’s victory, Roosevelt worked as the Assistant Secretary of the Navy until 1921. He was engaged in the US Air Force Fleet enhancement, shit combat capacity improvement, and the President’s political line support.

In 1914, Roosevelt continued to work in the state system and simultaneously ran for the senate but failed. In 1920, he lost in the presidential election where he was the Democrats’ vice president candidate (James M. Cox was the nominee for the presidency). The political environment was not favorable for the Democratic bloc, and the Republicans won. Roosevelt withdrew into the shadows. In addition, he had poliomyelitis in 1921 so that his legs became paralyzed.

Still, the disease did not break Franklin’s will; in 1928, he won the elections for the New York Governor and managed to keep this position for two terms. He applied this governing experience to his further presidential work.

Before the elections in 1932, the New York Governor created the administrative agency that provided temporary emergency assistance to those who suffered from unemployment in the period of the economic crisis; thus, Roosevelt attracted his future voters. Besides, the well-thought pre-electoral PR campaign made him popular among the American population: the radio program “Fireside chats” with the candidate Franklin Roosevelt was held on a daily basis. All the recordings were published in small books later.

The most significant elections in Roosevelt’s biography, the elections for the US President took place in 1933. In his electoral campaign, Roosevelt created and delivered the key points of “The New Deal.” The program was aimed at the US economy disadvantages elimination: in the early 1930s, the situation was unfavorable and the global commodity and money crisis was present.

Voters believed the politician, and it was not a mistake. In the first three months of his presidency, Roosevelt put the bank system in order. The Farm Credit Act became one of the first acts by the new president. Franklin took control over the agricultural sphere and signed the additional act on the agriculture recovery.

The president’s participation in the industrial complex reforming played a significant role in the domestic politics of that period. The first days of Roosevelt’s presidency were marked with the necessary laws that improved the internal investment climate. The White House stabilized the situation in the country, reduced the unemployment level, and tamed the masses of angry farmers, workers, and bank clerks.

Roosevelt started introducing the programs that were expected to help socially unprotected children and senior citizens. Trade unions appeared, and the mechanisms of wage stabilization and the adequate tax system were created. In six month, Roosevelt restored the diplomatic relations with the Soviet Union.

In his final year at the Harvard University, Franklin married his distant relative Anna Eleonor Roosevelt who was two years younger than Roosevelt. In 10 years, 6 children were born in the family one of which died in infancy. In 1906, the first child Anna was born; later, the sons James, Elliot, Franklin Delano, and John Aspinwall were born. Gradually, the housekeeper and loving mother Anna Eleonor turned into Franklin’s personal assistant. Later, when her husband got sick, she had to take many political and social responsibilities.

Eleonor participated in Roosevelt’s first presidential campaign and spoke for his reforms. The president’s wife was also engaged in women’s employment and social protection: she was an outstanding first-wave feminist. Mrs. Roosevelt took care of disadvantaged social groups: the unemployed, teachers, journalists. In the late 1930s, Eleanor’s ratings were higher than those of her husband.

During the tense period of the struggle against fascism, Eleanor the assistant of the US Minister of Defense. She contributed to the United Nations creation and human rights protection organization including the rights of colored people. After Franklin’s death, she continued her political career in the administration of the next presidents. Mrs. Roosevelt’s experience and analytical skills were appreciated by Truman’s and Kennedy’s state apparatus.

Roosevelt chose the neutral political line in the relations with the European and Latin American countries. This position was explained by the fact that the president was reluctant to get involved in global international conflicts. However, this course led to the weapon export reduction which made a negative impact on the US economy that had hardly improved by that time. Thus, Roosevelt created the military alliance with Great Britain when Hitler’s blitzkrieg began and started providing his European partner with weapons.

As the Second World War broke out, the Americans were postponing the open conflict with Japan. On December 7, 1941, the Japanese military aircraft attacked the US Air Force base in the Pacific Ocean, Franklin Roosevelt and Winston Churchill declared war on Japan. Three days later, Germany and Italy declared war on the North Atlantic coalition. For three years, Roosevelt could not date to launch military operations on the European continent; the American President opened the Western Front only after the USSR large victories that reversed the course of the war.

The fascist aggression encouraged the idea to create the organization where four guardian countries’ representatives would protect peace all over the world. Roosevelt had been pondering the idea to unite Great Britain, the USA, the USSR, and China since the first days of the war. In January 1942, Franklin managed to establish the UN by the Union Declaration.

Roosevelt participated in meetings with Stalin and Churchill in Tehran, Quebec, Moscow, and Washington. At the Yalta conference in 1945, Roosevelt managed to secure the cooperation with the Soviet leader in terms of the operations against Japan; the USSR and US friendship improved. The famous photos of Roosevelt, Churchill, and Stalin at the dacha in Crimea resonated all over the world and betokened the thaw in the relations of these countries.

As Roosevelt came back to Washington from the Yalta conference, he continued to work on the Assembly of the United Nations and prepared for the Potsdam conference. However, on April 12, 1945, the president had a brain hemorrhage which led to his death. The US President’s grave is in Hyde Park, not far from the place where he spent his happy childhood.

Although the majority of Franklin’s activities were not finished (the alliance of the four was not created, the connections with the Soviet Union were not strengthened, the global market did not start developing according to liberal and capitalist laws), Roosevelt’s name is included in the list of the most prominent US leaders together with George Washington, Thomas Jefferson, and Abraham Lincoln.