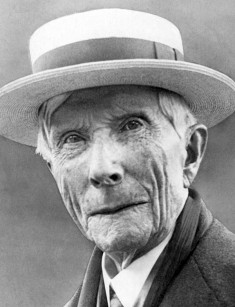 John Davison Rockefeller is the richest person in the modern history. The future billionaire was born on July 8, 1839, in Richford, New York. Both parents, William Avery Rockefeller and Eliza Davison, were parishioners of the Baptist church. There were six children in the family, and John was the second child. William worked as a traveling salesman and since childhood, he taught his children salesmanship. The father paid John for doing housework. The mother did not work and was only engaged in housekeeping. When William was not at home, she had to save money, and the children engrained this habit.

From an early age, little John showed business savvy as he sold candies to his sisters, but he bought them wholesale. And at the age of 7, the boy began to work at neighbor’s farm, where he earned his first money picking potatoes and growing turkeys. From the first days of his working life, Rockefeller set up an accounting book, where he carefully wrote income and expenses.

Young John had the impression of a quiet, thoughtful boy. A lean and non-emotional child could thing for a long time and he did not hurry with the decision. But in fact, John was a very sensitive boy, and he was concerned about the loss of his own sister, who died in infancy. After the baby’s death, John lay face down on the grass away from home for 12 hours.

Rockefeller did not like to study at school, although the teachers noted the boy’s tenacious memory and the ability to think logically. During his studies, John began a moneylending business. Rockefeller realized that he could easily earn money by lending small amounts at low interest. The boy did not want to become a slave to money and work for a salary day and night, John decided to make money his own slaves and make them work for him. Upon graduation, John became a student of the Commercial College. The young businessman attended a three-month accounting course, where he mastered the necessary basis of money turnover.

In 1855, John became an employee for the first and only time in his life. He worked at Hewitt & Tuttle company in the accounting department. His initial salary was 17 dollars, but after a few months, the young man was promoted to 25 dollars. Rockefeller was appointed the company's manager a year later. John began to receive a salary 20 times more than the salary of an accountant. But this ambitious young man was not satisfied with this sum, as the previous manager was paid much more. So, John left the company to begin his own business.

Rockefeller had to borrow 1200 dollars from his own father at 10% per annum to become a partner of a British businessman. Having collected the necessary 2000 dollars, Rockefeller became a companion and the owner of the shares of the Clark & Rochester firm. The company traded agricultural products. Rockefeller quickly won the trust of partners with his business acumen, intuition, and sincerity. The young man took up the management of the financial affairs of the enterprise.

The second half of the 19th century was the beginning of a new sphere of the market such as the oil refining business in America since kerosene lamps became popular in everyday life. John Davison Rockefeller offered the practicing chemist Samuel Andrews to join him and John made the scientist a companion of the new Andrews & Clark company. Previous partner Clark did not want to participate in such a business, and John had to buy back a stake in the company and take control of the business.

At the age of 31, Rockefeller established the Standard Oil Company, which was engaged in a full cycle of kerosene production from oil production to the sale of finished products. The peculiarity of doing business was that John did not pay employees wages in money. The businessman gave shares of the enterprise. This approach allowed workers to work with greater responsibility because then their well-being directly depended on the success of the firm.

Rockefeller’s business developed gradually. John achieved reduced prices for oil transportation by rail for his own company due to flexibility and the ability to negotiate with influential people. Oil products of John’s company were transported two-three times cheaper than the products of competitors. This situation forced other oil companies to sell the manufacture to Standard Oil. Thus, the enterprising businessman turned into a monopolist.

1890 saw the Sherman Antitrust Act which was aimed against the activities of the Standard Oil Company. Rockefeller was forced to split production into 34 controlled enterprises for 20 years. John secured the right to own a majority stake in each of them. This division of business positively influenced the capital of the tycoon, Rockefeller largely increased his own income.

Each year, John Rockefeller's income was $ 3 million from the activities of the Standard Oil Company. At the time of his death, according to expert estimates, the fortune of the oil tycoon was $ 1.4 billion. The company owned 70% of all world oil deposits. It is $ 318 billion, or 1.5% of the United States GDP in terms of the current dollar rate. Rockefeller owned 16 railway companies, 6 steelmaking plants, 6 steamship companies. The businessman owned 9 banks, 9 real estate companies.

Rockefeller surrounded himself with luxury at the end of his life, but he did not show off to the public. The tycoon’s family owned orange groves, villas and mansions, a land property of 273 hectares. John Rockefeller's favorite game was golf, so the billionaire had a playing field for personal use. The tycoon explained his own well-being by discipline and the 12 golden rules of life that John worked out in his youth.

John Rockefeller visited the Protestant church since childhood and as a pious Christian, he transferred 10% of his income to the needs of the parish which he attended. The oilman did not change his habit until the end of his life. The magnate transferred $ 100 million. In addition to donations to the church, Rockefeller did a lot of charity work. John transferred money to the University of Chicago, the New York Institute of Medical Research. He founded these institutions. In the early 20th century, Rockefeller created the General Education Board and the Rockefeller Foundation.

The oil tycoon wrote a number of biographical books, the first one was the 1909 edition of "Random Reminiscences of Men and Events". In 1910, Rockefeller's book "Making Money" about the history of enrichment was published. In 1913, the businessman wrote the book "Reminiscences", in which he described all interesting facts of his own biography.

At the age of 25, John Rockefeller married the teacher Laura Celestia Spelman from a wealthy family. The girl attracted the bridegroom with her piety. The young people were united by a mutual feeling of love and views on life and family well-being. Both were extremely economical and modest in desires.

The couple had 4 daughters and the son John D. Rockefeller Jr., who was the only heir. He continued the father's business. Even when Rockefeller bought an oil refinery in Cleveland, the family continued to live in a rented house and did not have the servants. The oil tycoon wrote that he owed his wife a commercial success.

After the death of his wife, John Rockefeller lived for a long time. The oilman began to like meeting with women and gradually got used to wearing expensive suits. Rockefeller’s favorite headdress was a straw hat and the elderly entrepreneur often posed for a photo in it.

John brought up children in an unusual way. Each child had an account book where they noted down money rewards and expenses. There was a certain system of encouraging for work in the Rockefeller house. John awarded the daughters and son for their refusal from any benefits. For example, the child was given a sum of money for a day without sweets.

John D. Rockefeller Jr. largely increased the fortune of the family corporation. Five grandchildren, including the most famous of them Nelson, Winthrop, and David, participated in the political and economic life of the United States until the beginning of the 21st century.

John Rockefeller had two dreams in his life that did not come true: to live till 100 years and earn $ 100 thousand. But the entrepreneur died at the age 97, and the fortune was $ 192 billion. John Rockefeller died on May 23, 1937, from a heart attack in Florida.

The famous quotes of the oil magnate:

“He who works all day has no time to make money”;

“Your well-being depends on your own decisions”;

“If your only goal is to become rich, you will never achieve it”.

1. Work less for people. The more you work for someone, the faster you become poorer. Such "work" makes you a "slave".

2. Saving money is a step to success. Buy products where it is cheaper or wholesale, prepare a list of necessary things in advance, purchase products according to the list.

3. If you are poor, start doing business. If you do not have a penny at all, then you should start up business right now with all possible dispatch.

4. The path to success, the road to enormous wealth goes through passive income.

7. Poor surroundings, unsuccessful people pull for poverty and failure. We need to surround ourselves with winners and optimists.

8. Do not come up with an excuse for the opportunity to postpone the first step towards achieving your goal. There is no any.

9. Study the biographies and thoughts of the world's richest people who have achieved success. The life of a successful person will help fulfill the desires of everyone. This is the meaning of this quote.

10. Dreams are the main thing in your life. The main thing is to dream and believe that dreams will come true. A person begins to die when he stops dreaming.

11. Help people not for money, but from the heart. Give 10% of the profits to charity. Each person should help those in need. This is evident from John Rockefeller’s success story.

12. Create a business system and enjoy your earned money. The meaning of this quote is that a person must work in order to live happily, but not stupidly accumulate money. 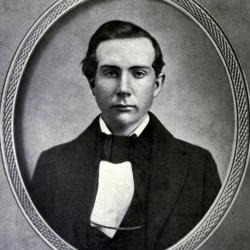