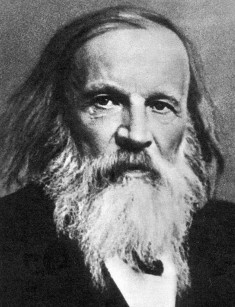 Dmitri Ivanovich Mendeleev is a Russian scientist, ingenious chemist, first-rate physicist, researcher in the fields of metrology, hydrodynamics, geology, a thorough expert in the industrial field, an instrument maker, an economist, an aeronaut, an educator, a social activist and an eccentric thinker.

The great scientist was born on the 8th of February 1834 in Tobolsk. His father Ivan Pavlovich was the director of district schools and Tobolsk gymnasium. His mother Maria Dmitrievna was engaged in the education of children and in the household, she had the reputation of the intelligent and clever woman. Dmitri was the youngest in his family, last one from the fourteen children. When Dmitri turned 10 years he lost his father who had gone blind and soon died.

During the studies at the gymnasium, Dmitri hadn't shown any special abilities, Latin was the most difficult subject for him. His mother imparted love and interest for science to his son, she also contributed to the formation of her son’s character. Maria Dmitrievna took her son to study in St. Petersburg.

In 1850 in St. Petersburg the young man entered the Main Pedagogical Institute on the Natural Sciences of the Physics-Mathematics department. A.A. Voskresensky and N.V. Ostrogradsky and E.H. Lenz were the teachers of the future outstanding professor.

During his studies at the institute (1850 - 1855), Mendeleev showed uncommon abilities. Being a student, he published the article "About Isomorphy" and a number of chemical analyses.

In 1855 Dmitri got a degree with the gold medal and the direction to Simferopol. Here he worked as the senior teacher of the gymnasium. With the beginning of the Crimean war, Mendeleev moved to Odessa and received the teacher's position at the lyceum.

In 1856 he again came to St. Petersburg. He studied at the university, took his dissertation, and taught chemistry. In autumn he took one more dissertation and he got a degree of Private- Dozentin of the university.

In 1859 Mendeleev was sent on the mission to Germany. He worked at the University of Heidelberg, equipped the laboratory, realized research of the capillary liquids. Here he wrote the articles "About Temperature of Absolute Boiling" and "About Expansion of Liquids" and also he discovered the phenomenon of "the critical temperature".

In 1861 the scientist came back to St. Petersburg. He had written the book "Organic Chemistry" for what he received the Demidov Prize. In 1864 he had already become a professor, and two years later he became the head of the department, he was teaching and working on the "Fundamentals of Chemistry".

In 1869 he represented the periodic system of elements which he had been improving during all his lifetime. In 1865-1887 he had been developing the hydrate theory of solutions.

In 1872 he began to study the gas pressure, two years later he came up with the equation of ideal gas. In 1880-1885 he had been studying the features of the oil processing.

In 1890 Mendeleev had had to leave the university because of the quarrel with the high-ranking official. In 1892 the scientist invented a technique of receiving single-base powder. Along with it, he was appointed to be the guardian of the Depot of the Exemplary Measures and Scales. Here he renewed the prototypes of the pound and arshin and he was engaged in the calculations for comparison of the Russian and English standards of measures.

The major inventions and discoveries

• Mendeleev invented the operated balloon which became an invaluable contribution to the aeronautics.

• The scientist developed the periodic table of chemical elements which became the graphic expression of the law established by Mendeleev during his work on the "Fundamentals of Chemistry".

• Mendeleev invented the densimeter – the device which determines the density of the liquid.

• The scientist discovered the critical boiling temperature of liquids.

• Dmitri Mendeleev came up with the ideal gas equation establishing dependence between the absolute temperature of the ideal gas, the pressure, and the molar volume.

• Mendeleev established the Main Board of Measures and Scales – the central institution of the Ministry of Finance which managed the sizing part of the Russian Empire and submitted to the Trade Department.

Mendeleev as the author of more than one and a half thousand scientific works had huge scientific authority in the world. The scientist awarded numerous scientific ranks, a number of Russian and foreign prizes. Moreover, he was the honorary member of a number of scientific organizations in his native country and abroad.

In youth, one unpleasant story had happened to Dmitri Mendeleev. His courtings for the girl Sony whom he had known since childhood resulted in the engagement. But the coddled beautiful girl hadn't got married to Dmitri. On the eve of the wedding when all the preparations had been made, Sonechka refused to get married to Dmitri. She considered that there was no sense to change something and their life was already good.

Dmitri painfully endured separation with the bride, but life took its course. His trip abroad, lecturing and his devoted friends distracted his attention from these heavy thoughts. Having renewed the relations with Feozva Nikitichna Leshcheva with whom he had been acquainted earlier, he began to meet her. The girl was six years older than Dmitri but looked very young therefore the age difference was not noticeable.

In 1862 they got married. Their first daughter Masha was born in 1863, but she hadn’t lived for long, only for several months. In 1865 their son Volodya was born, and three years later their daughter Olya came to this world. Dmitri Ivanovich was very tied to his children, but he spent little time with them as he dedicated his life to the scientific activity. In this marriage based on the principle "love comes with habit" he wasn't happy.

In 1877 Dmitri met Anna Ivanovna Popova who became for him the person who was able to support him with a clever word in difficult moments. The girl was the creative and gifted person: she had been studying at the conservatory to play the piano and later she entered the Academy of Arts.

Dmitri Ivanovich arranged at his house youth "Fridays" where he got acquainted with Anna. His "Fridays" got transformed into literary and art "Wednesdays" in which regular visitors were gifted artists and professors. I.E. Repin, I.N, Kramskoy, A.I. Kuindzhi, I.I. Shishkin, N.P. Wagner, N.I. Beketov, K.D. Kraevich and others were among them.

Dmitri and Anna got married in 1881. Soon they gave birth to their daughter Luba, their son Ivan was born in 1883, their twins Vasily and Maria were born in 1886. In the second marriage Mendeleev was really happy.

The ingenious scientist died on the 2nd of February 1907. 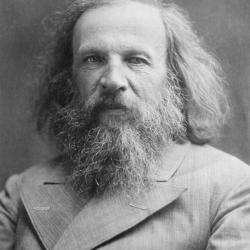