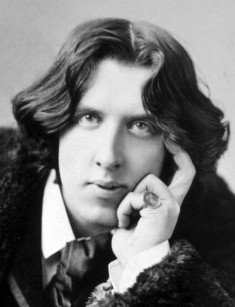 The future novelist, playwright, and poet of the last period of the Victorian epoch Oscar Fingal O'Flahertie Wills Wilde spent his childhood in the capital of Ireland, in the town of Dublin. He was born on the 16th of October of 1854. His parents were known in the high society. His father William Wilde was engaged in medicine, he was working within the scope of ophthalmology.

In 1864 William Wilde got the knighthood. The mother of future writer Jane Francesca Wilde fought for the rights of Irish people and actively supported revolutionary movement. Both parents were fond of literature: the father wrote historical and archaeological works, and his mother wrote poetry. A couple of Wilde organized salons which were attended by the medical and cultural elite of the country.

The Oscar was a middle child in his family. His elder brother Willie was born two years earlier than Oscar, and his sister Isola was two years younger than he. The girl died at the age of ten because of brain inflammation. Children got fine homeschooling. Their governesses were of German and French origin. The Royal school Portora which was in the small town, near Dublin became the first educational institution for the brothers. Little Oscar differed in talent for reading and for witty statements. At the age of 17, Wilde finished the school with a distinction and got a gold medal and was sent to Trinity College.

Oscar's interest in the Ancient Greek culture which had arisen during his school studies developed in college. He was engaged in detailed studying of the ancient history, aesthetics, ancient languages. Little by little Wilde began to put all the knowledge he had got into practice. His manner of behavior, clothes, drive for Hellenism, skepticism, self-deprecating - all these traits were formed under the influence of the gained knowledge and made his famous during further years.

In three years the promising student Oscar Wilde was sent to Oxford where his style and image of a flawless dandy were finally formed. At that time fabulosity of his own personality became one of the points of success for Oscar Wilde. He never hurried to deny all the improbable gossips and rumors about himself.

While studying at Oxford University the writer’s attitude to the beauty had been finally formed. At that time moral values were not the only criterion of beauty for Oscar Wilde. English writer and theorist John Ruskin became Oscar's teacher and he affected Wilde's outlook. John Ruskin had a great impact on literary tendencies of the end of the 19th century.

During the years of studies Oscar made a trip to Italy and Greece, the counties he adored, for the first time. Wilde was so inspired by new impressions that after his journey he wrote one of the first poems "Ravenna" for which he got an award of the university.

At the age of 24 Wilde moves to the capital of Great Britain. He becomes a popular regular at secular salons of London due to his ironic and contradictory statements and a manner of dressing. Wilde’s tastes and habits dictated fashion for the intelligence and aristocracy. Soon there appeared many young people who tried to imitate their idol in everything. His admirers quoted the jokes of the young Irish man.

During the first years of his literary career Oscar Wilde was engaged only in poetry, and occasionally wrote essays devoted to esthetics problems. From 1882 till 1883 the young writer was abroad, in the USA where he traveled and gave lectures on art. The American public was crazy about the writer’s charm and intelligence, a big army of admirers and followers of Oscar Wilde appeared `overseas.

After Oscar Wilde had returned to Europe he at once went to France where he got acquainted with the color of the French literature.

Having returned home and created his own family, Oscar Wilde devoted himself to the writing of fairy tales for what he was inspired by his children. These are the collections of fairy tales "The Happy Prince", "A House of Pomegranates" which best-known tales are "The Star Child", "The devoted friend", "The Nightingale and the Rose", "The fisherman and his soul". By this time Wilde achieved the peak of his glory in England.

The journalistic articles of Oscar Wilde were published in the best editions of the country, Wilde accepted the position of the editor in the magazine of "The Woman’s World". The legendary playwright Bernard Shaw spoke favorably of Oscar Wilde in his interviews. The London dandy and the provocator caused contradictory feelings in public: from blind adoration to criticism which was expressed in attacks and the publication of caricatures of the writer. But biting words against Oscar even strengthened his authority and popularity in the society.

At the age of 33, Wilde wrote his first serious works. He started from writing the stories "Lord Arthur Savile's Crime", "The Canterville Ghost", "The Sphinx without a Secret" and later Wilde started the main work of his creative career - the novel "The Picture of Dorian Gray" which was published in 1890. The book was met rather ambiguously by his contemporaries.

Despite the educational purposes of the novel which were pursued by the author in society the novel was regarded as an immoral literary work. But the commoners were really impressed by this novel. After the scandal related to the publication of his only novel, Oscar Wilde published the drama "Salomé" which influenced the development of decadence art in many aspects. The play also received controversial feedback from the public and hadn't been staged in Great Britain for a long time.

In the early nineties, Oscar Wilde created a series of comedies for the theatrical scene which were staged in the theaters of London. These are such plays as "Lady Windermere's Fan", "A Woman of No Importance", "An ideal husband" and "The Importance of Being Earnest". In this play, the playwright proved himself as the master of witty dialogues. With more confidence, Oscar Wilde was using the paradox technique in his drama works.

Oscar Wilde since youth easily fell in love. He had his first love affairs with Florrie Balcome and the actress Lilly Langtry. Already at young age, the writer visited capital brothels which were popular with the bohemians. But at the age of 27 Wilde met Constance Lloyd, the daughter of the Irish lawyer and after the torrid three-year love affair this woman became Wilde’s wife. Soon in the family of the London dandy two sons Cyril and Vyvyan were born one after the other.

In several years of marriage, the spouses began to grow apart. It is quite possible that the undertreated venereal disease of the writer became the reason for their estrangement. Oscar Wilde began to live separately from his wife and their children, and later he changed his sexual orientation. Robert Ross who had been working for a long time as Wilde’s personal secretary and a trusted person of the writer became one of his first male partners.

In 1891 the fatal acquaintance happened in Oscar Wilde’s life. The young marquis Alfred Douglas visited him and expressed his admiration of the writer’s novel which had recently been published. Soon the young men became close friends and later their friendship developed into a passion.

Men stopped concealing their relations, they appeared at secular parties together. Bosi Douglas, the way friends called Alfred, had a narcissistic kind of character – he tried to bend everybody to his will. Oscar couldn’t resist vagaries of the young man and indulged him all the time. Soon marquis Queensberry, the father of Alfred, discovered his son’s love affair. Such shocking news possessed him to start pursuing Wilde. The open note which was handed over to Oscar Wilde by marquis during the meeting of "Albemarle" club became the last straw for the writer's patience. In this note, the father of Bosi accused Wilde of sodomy.

Feeling indignation, Oscar filed a lawsuit against the opponent for slander what turned out to be a mistaken decision. Marquis who was prepared for the court proved the right of the accusation. After completion of the process, there was the counter court session which purpose was to charge Wilde of homosexuality. Marquis won the court case, and the writer was imprisoned. Oscar Wilde received the highest punishment which existed during these years: he was sentenced to two years of hard labor. Most of his friends, including Bosi, turned away from him. His wife together with their children left the country and changed her surname. In several years she died in Italy after an unsuccessfully performed operation.

After coming back to the free world in 1897 Oscar decided to leave his homeland too soon and went to Paris. These years he had been living on the maintenance which his wife sent to him after the sale of all personal property of the Wilde's family. In the capital of France, Oscar began to meet Douglas again, but their relations became tense. Having taken a pseudonym of Sebastian Melmoth, Oscar started the literary activity and wrote a well-known work of the last years of his life "The Ballad of the Reading Gaol".

At the beginning of 1900, Oscar got sick with an ear infection which together with the weakened organism provoked the development of meningitis. The writer died on the 30th of November of the same year because of brain inflammation. Wilde was buried at one of the cemeteries in Paris, and one decade later his grave was transferred to Père Lachaise Cemetery. At the place of burial of the writer, the monument in the form of the Sphinx’s head was mounted. 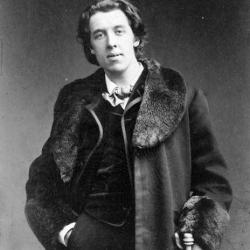