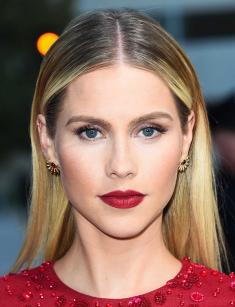 Claire Rhiannon Holt is an Australian actress, the star of the series H2O: Just Add Water, The Vampire Diaries and The Originals. Claire was born on June 11, 1988, in the Australian city of Brisbane. Holt had two other sisters and a brother. Claire's mother is from the UK, so the children often visited relatives in the Northern hemisphere. Her life in her native land was no less intense thanks to forty cousins of Claire, nephews of her father.

Claire studied at Stuartholme School in Toowong for seven years, a suburb of Brisbane, where she studied until 2005. The girl attended the church choir and theater circle, took piano and guitar lessons at school. Claire paid much attention to sports training. The girl was fond of swimming, volleyball, water polo and Taekwondo. She had a black belt.

Clare prepared to enter medical school in her youth but a biography of the girl turned out differently. Holt began to appear in advertising, where the agents noticed the girl for the selection of actors for the series H2O: Just Add Water. Having demonstrated acting skills and sports training at the casting, Claire was approved for the main role of a mermaid girl named Emma Gilbert. Two friends of the main character were played by Australian actresses Cariba Heine and Phoebe Tonkin.

While working on a first project, Claire was with the growth of 5,5 feet (169 cm) and weighed 121 lbs (55 kg). Her training before the shooting started daily at 5 am, the girls had to master the technique of swimming with a special device, a tail, which weighed up to 33 lbs (15 kg). Besides, she had to learn how to communicate with dolphins, baby sharks and maneuver underwater among coral reefs. Claire starred in two seasons of the series and became a world celebrity immediately because the film was shown in 100 countries.

After working on the first series, Holt took part in the filming of advertising of the Australian amusement park Dreamworld, the water park Queensland Lifesaving, a chain of snack Sizzler. In 2009, the American horror Messengers 2: The Scarecrow of Martin Barnewitz was released, in which the heroine of Claire, Lindsay Rollins, happened to be the culprit of the penetration the forces of evil on the planet.

In 2010, the actress received the role of Samara Cook in the series Pretty Little Liars, which was created by order of the channel ABC Family. The company of five friends Hanna, Aria, Alison, Spencer, Emily found missing one of the girls, who is soon dead. After the mysterious murder, the friends start to get the message of a provocative nature from an unknown author. High ratings of the series allowed the creators to extend the shooting for five seasons.

In 2011, Claire began working on the role of Chastity Meyer in the youth comedy Mean Girls 2 directed by Melanie Mayron. The actresses Meaghan Jette Martin, Jennifer Stone, Maiara Walsh, Nicole Gale Anderson, starred in this film. The story, described in the film, tells about one of the American colleges, where there was a real war between two groups of students. The girl played the role of Rebekah Mikaelson in the rating series The Vampire Diaries the same year, the vampire of an ancient family, a younger sister of the vampire Klaus (Joseph Morgan) and Elijah (Daniel Gillies).

The actress appeared in season 3 and remained in the series for three years. According to legend, the girl was in a relationship with Stefan in the early XIX century, contrary to the plans of Klaus, who soon separated the lovers. Rebekah behaves inconsistently, committing selfish acts. Despite the hatred of Elena, the vampire saves her in time of danger. She is in search of drugs, which will help Rebekah to turn into a human; she starts to cooperate with Stefan and Damon. After saving Matt's life, she goes on a summer trip with him.

In 2012, the second full-length film Blue Like Jazz directed by Steve Taylor was released. Holt's partner on the stage was Marshall Allman, who played a young man, who grew up in a religious family. The shooting of spin-off show The Vampire Diaries – the series The Originals started a year later, which tells about the family of original vampires Mikaelson, who settled in the city of New Orleans. A friend of Claire's first work about mermaids, Phoebe Tonkin received one of the main roles in the film. The actress turned into a werewolf Hayley, who was pregnant by Klaus. The series was created by order of the channel The CW, which is broadcast for the fifth season in a row.

In 2014, Claire Holt received the nomination the Teen Choice Awards in the category Best Actress. In 2015, the actress took part in the detective series Aquarius about the work of a police investigator, who is authorized to track down the sect of Charles Manson, turning his followers into serial killers. David Duchovny, Grey Damon played the main characters. Claire turned into the police officer Charmain Tully.

In 2012, Claire Holt started dating Matthew Kaplan. In 2015, young people got engaged. The photo of the couple, which was posted on account of the actress on "Instagram", gained 80 thousand likes for a few hours. In April 2016, Claire and Matthew became husband and wife.

There were pictures of the actress on the network, in which the figure of Holt looked somewhat plump. Many fans suspected that the actress was pregnant but there was not any official confirmation in the press.

In 2016, she received an invitation from the creators of the thriller 47 Meters Down for the main role of Kate, who went to rest on the coast of Mexico together with her sister Lisa. Girls decide on an adventure and dive in spacesuits and a special cage in the sea, which is full of white sharks. The situation gets out of control when the cable breaks and the cage sinks to the seabed. Claire Holt has a net worth of $500 thousand.

The American singer and actress Mandy Moore starred in the film together with the actress. The premiere of the film took place in the UK in late 2016, in the United States and Russia in June 2017. The actress starres in four new projects: Wolf in the Wild, Irreplaceable You, The Divorce Party and Doomsday.

In April 2017, the husband of the actress Matthew Kaplan filed for divorce. Claire confirmed the information about their breakup in May. Claire Holt went with her friends on a sea trip to the shores of Greece in June. The girl began an affair with Andrew Joblon. The actress posted their joint photo on "Instagram."