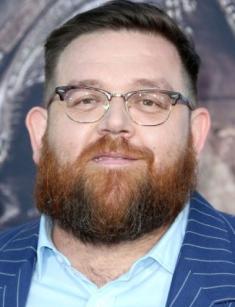 Nick Frost is a famous British comedy actor. He is also known to the admirers as a stand-up comedian and a screenwriter. His unusual appearance allows the Britt to get into unforgettably funny characters. Fame came to the performer after his participation in Shaun of the Dead and Hot Fuzz. Frost is 5 feet 67 inches tall.

Nick was born on March 29, 1972, in London. His parents, Tricia and John, worked as interior designers. The actor also has an older sister.

When the teenager turned 15, his parents lost their business. The family had to change the house, and the guy had to leave school and get a part-time job as a waiter. A few months later, the actor went to Israel, where he took up painting.

Later, back in England, Nick got a job in a Mexican restaurant as a cook and bartender. Famous actors dined there, including Simon Pegg. He and Frost became friends and later creative partners. The men had a similar sense of humor; both were able to look at the world with irony and a bit of sarcasm.

It was Pegg who invited Frost to participate in the British comedy TV project Freaks and Geeks, which lasted from 1999 to 2001. The talented performance of the young actor attracted the attention of directors. Nick began to receive offers to star in the popular series Black Books, Comic Relief and others.

In 2004, the creative biography of the actor was replenished with new works. Then he tried himself as a screenwriter. Together with Simon Pegg, Frost wrote the screenplay for the short film Danger! 50000 Zombies!. Director John Riley got interested in the script, and the two friends got the leading roles in the project.

Be genre, the picture became a parody on television shows in which survival instructors teach people how to behave in critical situations. In the same year, Nick made his debut in feature films. He starred in the movie directed by Edgar Wright, Shaun of the Dead. The actor created the image of the central character's (played by Simon Pegg) best friend.

This movie was the beginning of the original trilogy, called Three Flavours Cornetto trilogy. The exciting feature of all the three films was the mention of ice cream of the famous brand. The second part of the trilogy, Hot Fuzz, came out in 2007. The black comedy brought together old friends on the same site again.

Simon played the role of the courageous policeman Nicholas Angel, sent by his Department to serve in a rural town. And Nick got into the character of Angel's partner, dumb Police Constable Danny Butterman. The final part of the trilogy-the picture The World's End - was released in 2013. In the center of the plot was the story of a meeting of old friends who decide to bring to an end what they had started many years ago, but could not finish - a drinking marathon.

In the future, fellow comedians have created a few more collaborations. The audience particularly admired the movie called Paul. The picture was a combination of fantasy, detective, comedy, and other genres. Besides, the actor starred in such Hollywood motion pictures as The Boat that Rocked, Snow White & the Huntsman, The Huntsman: Winter's Warm, and participated in many other projects.

Christina Frost, a Swedish producer, became the actor's wife. The couple got married in 2008. In 2011, his wife gave Nick a son.

However, in 2013, Nick and Christina decided to break up. The couple officially got divorced. Now it is unknown whether Nick is single or in a relationship. Frost doesn't have any photos with his girlfriend on the Internet.

Nick Frost has a net worth of $16 million. The actor continues to star in movies. In 2019, there appeared two motion pictures featuring Nick, Fighting with My Family and Horrible Histories: The Movie – Rotten Romans.

Several more works with the participation of the comedian are in the post-production stage. Frost often gives interviews in which he shares his impressions of the shooting process, as well as ideas for creating new projects.