Laurence Olivier is a British theater and movie actor. He is one of the greatest actors of the 20th century whose career includes both antique drama by William Shakespeare, and modern American performances. He is the winner of Academic Awards who has 85 full-fledged movies in his filmography. During his career, he has become the director of 38 theatrical performances and six movies.

Laurence Kerr Olivier was born on the 22nd of May, 1907, in the town of Dorking located in the County of Surrey (England). His father who dedicated his life to the church brought up two children (the actor has a sister Sybille and a brother Gerard) in the atmosphere of severe religiousness. Because of this in his childhood, the master of transformations was attached to his mother, Agnes Louise. It’s known that the death of his mother in 1920 became the real tragedy for Laurence.

For the first time, the future eminent actor appeared on the stage at the age of nine and performed the role of Brutus in the play - Julius Caesar. At that time the well-known actress Ellen Thierry was present at the play, and after the end of the play, she praised the acting of the young artist. From the biography of the Hollywood actor, it's known that after four years after the premiere Laurence entered St Edward's School in Oxford.

Here, during the theater festival, he performed the part in the best traditions of Shakespearean times. He repeatedly appeared in the part of Katherine in the play The Taming of the Shrew and also Puck in Midsummer Night's Dream. The progress and success of the son convinced Olivier Sr. in the fact that his son really had acting talents and skills.

In 1924 Laurence entered Central School of Speech Training and Dramatic Art. After the completion of the studies, he was admitted to the troupe of the Birmingham theater. Already in a year the actor began the leading actor and performed the roles of Hamlet and Macbeth on the stage of the theaters.

In 1930 Laurence appeared on the screens for the first time. He played the role of Peter Bill in the movie The Temporary Widow. In a year he enriched his filmography with the film The Yellow Ticker. It's worth noting that the actor didn't have a serious attitude towards the shootings and considered the stage the main thing in his life. On the stage, he brilliantly acted in the roles of Shakespearean heroes.

In 1939 the actor took part in the movie Wuthering Heights directed by William Wyler. Already in a year together with Gree Garson, the actor performed the leading role in the screen adaptation of Jane Austen's Pride and Prejudice. In 1948 there was released the movie Hamlet in which Laurence not only played the leading role but also became the director and scriptwriter. This movie received many awards, including the Academic Awards.

During the period from 1951 till 1955, the eminent actor enriched his filmography with the screen adaptation of Sister Carrie written by Theodore Dreiser and also the movies The Beggars' Opera and Richard III. During the next years Olivier took part in a couple of tens of movie projects among which the spectators especially liked the following pictures - The Prince and The Showgirl with Marilyn Monroe in the major role, Spartacus, Khartoum, and Three Sisters.

In 1976 there was held the premiere of the movie Marathon Man directed by John Schlesinger. The plot of the picture is based on the novel written by William Goldman. This picture narrates about the everyday life of the unremarkable student-historian Thomas Levy (Dustin Hoffman) as it may seem at first sight. In this picture, Laurence transformed into the character of doctor Christian Szell.

Three years later the actor performed the role of the expert on occult sciences - Abraham Van Helsing, in the screen adaptation of the same-name novel Dracula written by Bram Stoker. In 1981 there was premiered the free screen adaptation of the Ancient Greek Myths under the title Clash of the Titans directed by Desmond Davis. In this picture, the actor received the role of the Zeus – the lord of thunder and lightings.

In 1984 the fans saw their favorite actor in the movie The Bounty in which except for Olivier there appeared the actors Mel Gibson, Anthony Hopkins, and Liam Neeson. During the last of his life, Olivier worked a lot on the television. The most remarkable roles became the following – in the TV movies The Ebony Tower, Wagner Love Among the Ruins in which the actor appeared in the creative duet with Katharine Hepburn. The last full-length movie, in which Olivier appeared was the role of the elderly soldier in the picture War Requiem (1989).

In August of 1940, in the Californian town of Santa Barbara, there was held the wedding of the actors Laurence Olivier and Vivien Leigh. Before this secret ceremony (at the wedding there were present only the actress Katharine Hepburn and the scriptwriter Garson Kanin as witnesses) the artists had a passionate love affair and difficult divorces.

They lived together for twenty years during which Vivien turned from the aspiring actress into the real movie star who began to suffer from the depression. And Laurence became the jealous husband who couldn’t forgive his spouse for her success. Their love story started in 1935. Then the play Romeo and Juliet were shown on the theatrical stage in London and Olivier had the major role in it.

The young actress who was present at the play at that time was enchanted by the image of passionate and witty Romeo. From this point, Vivien tried to attend each performance with the participation of the actor whom she began to like. Once the girl even managed to get behind the scenes and to get acquainted with the artist in person.

Their acquaintance developed into the friendship, and later they began to have a torrid love affair which started during the shootings of the movie Fire Over England. Then the actors performed the roles of the lovers. During three months of the shootings, their love on the screen transformed into real love. Everything was almost perfect except for one notable "but" – both of the actors weren’t single at that moment. Vivien had a husband and little daughter Suzanna, and Olivier was married to the actress called Jill Esmond and also had a kid

Even though the spouses of the actors refused to give them the divorce, they began to live together even being in the official marriage. After that, the artists received the divorce and got married secretly. In a short time after the wedding, Alexander Korda offered the newlyweds to perform the leading roles in the picture Lady Hamilton. The plot of this movie is focused on the story of the forbidden love of Admiral Nelson and the ambassador's wife, Emma.

Leigh managed to endow the character of this shrewd lady Hamilton with such light and innocence that she overshadowed Laurence in the role of the brave sea captain. Further, with each new joint appearance in the movies, the difference in the action of both artist became more and more obvious. Olivier considered the acting skills to be business, Vivien gave all her soul to this art and was living each moment of the character's life as her own.

Just the efforts of the charming actress saved their marriage from the failure: the young woman was praising Olivier all the time and repeatedly refused the profitable offers for the sake of her family happiness. In 1944 one more misfortune happened in their family - cheerful and active Vivien got ill with tuberculosis. The doctors prescribed her to stay in bed and to get treatment at the hospital, but the lady didn't want to become a recluse by her won will. She ignored the doctors’ advice and continued to work.

The disease was getting worse and worse because of the nervous breakdowns. Laurence got irritated and was afraid of his wife's attacks at the time of which she began to beat him quite often. Olivier was tired of his wife's hysterics and began to pay attention at the young actresses more and more often. While Leigh was feeling worse and worse, Laurence became to be fond of the young theatre and movie actress Joan Plowright.

On the day when Vivien had her 45th birthday Olivier presented her the Rolls-Royce, and a couple of days later he gave Leigh the letter in which he asked her about the divorce. In 1961 Laurence got married for the third time, the actress Joan Plowright became his spouse. She gave birth to three children of the star of TV screen: the son Richard (he became a director) and two daughters Tamsin and Julie Kate (they became actresses). The spouses lived together till the death of Olivier.

In the eighties, Olivier was diagnosed with cancer. During a couple of years, the director was struggling against this disease. But unfortunately, the disease killed him. Laurence died on the 11th of July of 1989. It’s known that during the last hours of his life close friends and his family were close to him. The theatrical personality is buried near the burials of the writers Charles Dickens and Thomas Hardy in the Poet’s Corner in Westminster Abbey.

In 2004 there was released the movie Sky Captain and the World of Tomorrow directed by Kerry Conran. Except for the artists Jude Law, Gwyneth Paltrow, and Angelina Jolie, the computer reconstruction of Olivier also appeared in this movie. Three years after the premiere, in London, in the square near the Royal National Theater, there was opened the monument in honor of Laurence Olivier. The monument represents the actor in his best role of Hamlet. 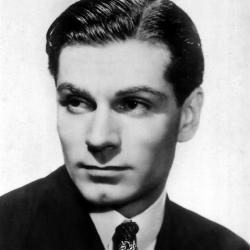