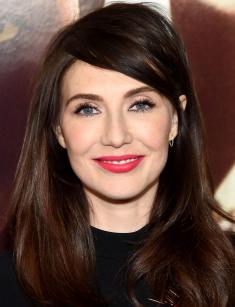 Carice van Houten is a Dutch actress and singer, the star of the war drama Black Book. She also played Melisandre in the television series Game of Thrones. These roles brought to her world fame. Judging by the standards of Holland, it's time to call Carice a superstar. In addition to successful work in her native province, the artist played in a lot of Hollywood movies. Besides, she can boast an extensive number of prestigious awards and prizes.

Carice was born in Leiderdorp on September 5, 1976. The actress's family is directly related to television. Her mother Margje Stasse worked as an employee of the educational channel and her father Theodore van Houten wrote scripts for programs. Carice has a younger sister, Jelka van Houten, who became an actress.

The girl dreamed of the path of the actress from the age of five when the dad took his daughter to the cinema to show a movie about Napoléon Bonaparte. Colorful costumes and the chance of reincarnation in other people fascinated young Carice. She attended the St. Bonifatiuscollege, where she first participated in the performances.

Two theater universities of the Netherlands accepted the gifted girl after school she studied at the Maastricht Academy of Dramatic Arts and the Kleinkunstacademie in Amsterdam. Carice van Houten chose the capital's educational institution, after which she began her career as a theater actress. In 1999, she even received the Nobel Pussy Prize as the best young artist, and a year later the Top Naeff Award as the best actress.

It should be noted that Carice was not limited to only one art form. In 2012, she recorded her debut music album "See You on the Ice" at a professional studio. The title track and the song "Particle of Light" became hits in the Netherlands.

Carice van Houten tried her hand in the cinema and made her theatrical career at the same time. She starred in television films: the drama Suzy Q, which brought to her the main Dutch film Golden Calf Awards. Later, the actress will become the owner of this award times, for the family movie Minoes, the anti-Nazi film Black Book of Paul Verhoeven and the film biography Black Butterflies. The film Black Book became the highest grossing in the history of Dutch cinema and brought to Carice van Houten popularity.

The drama Black Swans was released the year before. Carice played the main role. She went to Spain for the filming of the film. The working process took place in 2003 but the movie was released only in 2005 because of financial problems.

In 2007, the actress appeared in the romantic film All is Love. The film became the most visited Dutch comedy in history.

After the success of the movie Black Book, the actress was invited by foreign film companies. She plays in the English psychological film From Time to Time with Maggie Smith, in the American historical thriller Valkyrie with Tom Cruise, in the Spanish-British horror film Intruders.

In 2010, Carice van Houten appeared in the historical drama Black Death. Her colleagues on the set of the actress were the actors Sean Bean, and Eddie Redmayne.

A year later, the audience saw the actress in the film biography Black Butterflies. This movie was the fourth in the filmography of Carice, starting with the word "black." The plot of the drama tells the story of the real life of the poet Ingrid Jonker. Carice van Houten played the main role, for which she received the Tribeca Awards, the Golden Calf and the Rembrandt Award.

In 2013, the film The Fifth Estate was released on world screens. One of the roles went to Carice. Her colleagues on the set were Benedict Cumberbatch, Daniel Brühl. The film was shown at the Toronto International Film Festival. The drama received many negative reviews. However, critics praised the actors ' performance, condemning the script and direction.

Carice had success when she played the role of Melisandre in the cult television series Game of Thrones, filmed by the novels of the American writer George Martin. Carice van Houten as part of the cast of the project received the Screen Actors Guild Award for Outstanding Performance by an Ensemble in 2014 and 2016.

Later, the actress appeared in the film, where she starred with the star of Game of Thrones, Kit Harington.

One of the last works of the actress are the action thriller Incarnate, the sports drama Race and the mystical movie Brimstone, in which Dakota Fanning played. Viewers and critics met the films in different ways but did not leave the projects unnoticed.

Carice van Houten met with a partner in the film, the German actor Sebastian Koch on the set of the drama Black Book. They met and even lived in a civil marriage for three years. But they broke up because the career of the young people developed in different countries, they rarely paid attention to each other.

Later, Carice had a two-year affair with the Dutch film director and screenwriter Kees van Nieuwkerk. And since 2015, she lives in an actual marriage with the Australian actor Guy Pearce. The couple met on the set of the movie Brimstone. In January 2015, the artist divorced Kate Mestitz, with whom he lived for 18 years.

On August 29, 2016, Carice van Houten became a mother for the first time shortly before her 40th birthday. She and Guy had a son, named Monte Pearce.

Carice wrote and published the book Anti Glamour together with her best friend, the Dutch actress Halina Reijn, in which women expressed a view of the backstage life of film stars. Carice van Houten admitted in several interviews that, although she starred in Hollywood projects with pleasure, she could not live in America. It is strange for the colleagues of the actress that Carice is still in Europe but she argues that this lifestyle suited her much more.

In addition to the book Anti Glamour, Cariсe is an author of children's books.

In 2009, the actress became an Ambassador of the World Wildlife Foundation. She helps the organization actively, disseminating information about the objectives of the Foundation. The artist participates in fundraising and makes humanitarian trips.

The actress leads her social network "Instagram." Carice van Houten is busy taking care of the baby. She shares her private pictures and puts the photos of her baby.

In 2018, it was expected the release of the film Domino, in which the actress played the main role after a two-year break. The star of Game of Thrones, Nikolaj Coster-Waldau and her husband Guy Pearce starred together with her. Carice has a net worth of $5 million.

The artist is involved in the filming of the movie The Glass Room, which will be released in 2019.