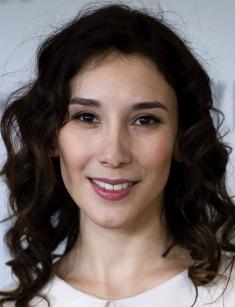 The biography of this actress is full of contradictions. She has Eastern roots but was born and grew in a European country. She planned to work as a civil servant but made a career in cinema. She starred in low-budget films and the super popular TV project Game of Thrones. Today, Sibel Kekilli is not only the actress but also an active fighter for women's rights both in her native Turkey and around the world.

Sibel Kekilli was born on June 16, 1980, in the German city Heilbronn. The parents of the actress, according to her, adhered to quite liberal views, so their family emigrated from Turkey in Germany in 1977.

Kekilli`s family spoke both German and native Turkish. And Sibel knew both languages brilliantly. The girl showed excellent academic performance at school and graduated with a superior diploma.

Then the 16-year-old graduate enters a 30-month training program to get a certificate to work in the local administration. The girl was taken on service in the Guildhall of Heilbronn after examinations.

Everyday administrative work did not attract Sibel and increasingly she began to think about changing the field of her activity. The girl left the civil service and moved to the city Essen two years later. She had a long search for herself there: Sibel worked as a seller, barkeeper, waitress, promoter and even a model. However, the girl was invited only to a photo shoot because of her low growth of 5,3 feet (163 cm).

It is unknown what would Sibel do, if not the event, that happened with her. The Turkish director, casting manager, Fatih Akin noticed the 22-year-old girl among the visitors of the shopping center in Cologne, who was looking for the actor of that appearance for the movie.

Sibel accepted the invitation to come to the casting, where she demonstrated her excellent diction, artistry, outstanding work in front of the cameras. As a result, she had 350 competitors, Kekilli was approved for the main role in the film Head-On.

Before filming, she went to a three-week course at the School of acting in Bochum to develop professional skills, to master the basics of stage speech and improvisation, the nuances of plastics and the body language.

The drama Head-On was released in 2004 and won the Berlin film festival's highest award, the Golden Bear. Also, the film won the FIPRESCI Prize for the relevance of the topic and deep social issues.

The plot of the film tells about the life of Turks, who emigrate to Germany, but the film deals with the problems of the pressure of women in Turkish society in the most of the film, who live under the threat of physical violence for the right to love and be happy. Fans were surprised how Sibel, who never lived in Turkey and did not know the pain of the situation, managed to turn into the image of the main character so authentically. The actress replied:

"I experienced that physical and psychological violence is the norm in Muslim families. And then I remain Turkish, born in Germany."

In 2004, the actress received the prestigious Bambi Award for the main role in the film Head-On. Kekilli began to be invited to events and actions against the violence of women in Eastern society. She becomes one of the activists of the movement.

The successful debut contributed to the rise of the acting career of Sibel Kekilli. She starred in a lot of international projects and her work is not unnoticed by professionals. So, the woman was recognized as the "Best Actress" for the role in the film Winter Journey (2006). The movie Die Fremde brings a new success. The movie was released in 2010.

The main character of Sibel is a young Turkish woman, who leaves her homeland to escape from her cruel husband and give her son a chance for a better life. The film received worldwide recognition and Kekilli won the prize in the category "Best Actress" at the Tribeca Film Festival, as well as the German Film Award, the "Lola" and others.

In 2010, Sibel received an offer from the channel HBO about the filming in the cult TV series Game of Thrones. As it turned out, the casting director of the project saw Sibel in the film Die Fremde and sent an invitation to the selection, impressed by her game. As a result, the actress took part in 20 episodes, playing Shae – beloved of the dwarf Tyrion Lannister. She describes the experience:

"Of course, it was clear that it is an expensive movie. I starred in low-budget films. It was normal for me. And it took me a while to notice the success. I did not watch the first seasons. And then, when I saw all this hysteria, I decided to watch what we did there".

Sibel did not forget about working in her native Germany, acting in an expensive American series. In 2011, she appeared in an unusual genre, the comedy What a Man directed of Matthias Schweighöfer.

Sibel Kekilli lives in Hamburg. The woman is not married but she has a young man. The couple has no children. The actress does not like to show her personal life. In part, she has this position because her name was often featured in the epicenter of scandals.

After the success of the film Head-On, journalists of the Bild newspaper found out that the actress starred in adult films under the pseudonym Dilara. Sibel did not refuse and commented:

"It's true, I was young and I needed money."

There was a noise. Parents ceased to communicate with their daughter. In 2004, the actress called on the press to stop "harassment" and "humiliation of human dignity." The second wave of public outrage rose after the series Game of Thrones. Sibel's followers on "Instagram," especially the fans from Turkey, shamed her for her role as a courtesan. She was forced to block her account temporarily.

Today, the actress is busy in the German TV project Tatort. She plays detectives, solving complex crimes together with the actor Axel Milberg. Sibel Kekilli has a net worth of $3 million.

Sibel continues to devote a great deal of her time to public work in campaigns against women's violence and pressure. She is often invited to the jury of international film screenings. For example, Kekilli took part in the judicial work of the Odesa International Film Festival in July 2017.