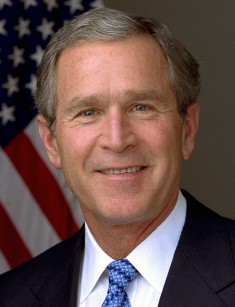 George Walker Bush, also known as George Bush Jr., was born in New Haven, Connecticut, on July 6, 1946. His father was George Herbert Walker Bush, more famous as George Bush Sr. and the 41st American President. He married Barbara Bush (nee Pierce) a week after he came back from the Second World War front.

Bush Sr. was one of the youngest naval aviators. In 1941-1945, he participated in 58 battles and received many awards including Franklin Roosevelt’s personal gratitude.

George was the first child of George and Barbara; he had three brothers and two sisters. Unfortunately, one of the sisters, Pauline, died of leukemia when she was four. George Jr. was seven at that time.

Bush Sr. went to the war at 18 and came back as a hero. Later, he received a university education and moved to Midland, Texas. He decided to take up the oil business and succeeded. In his expensive apartment, there was a bathroom with a bath and a fridge, the only one on their street. At that time, such things were luxurious.

In the course of time, Barbara and George moved to Houston, the largest city in Texas. Gradually, the family income was growing. George Herbert Walker Bush began his work with the modest $375 per month. When he started building his political career in 1966, he managed to gain $1 million for his company stock.

Later, the man worked as the CIA Director and became a significant member of the Republican party. In 1988, he was elected the 41st American President. Bush Sr. increased the tax rates and conducted military operations in the Persian Gulf, Philippines, and Panama. In the early 2000s, the aircraft carrier of the Nimitz-class was named after him.

George Bush Jr. graduated from elementary school in Midland and continued his education in the prestigious private Kinkaid School in Houston. At 15, the future president went to the Phillips Academy, Massachusetts, known as one of the best boarding schools for boys in the East Coast of the United States. George Bush Sr. used to study there.

In his days, George Herbert Bush was the crown jewel of the school and demonstrated excellent sports and academic achievements. Unfortunately, his son could not boast the same results. However, he showed different advantageous skills at school: he could get on well with people, made friends smoothly, and became the head of the academy cheerleader team.

As Bush Jr. finished school, he was going to Yale University. School teachers doubted the average student would be accepted to the prestigious university and tried to persuade the young man to give up this difficult goal. Nevertheless, George succeeded and became the Bachelor of History in 1968.

Again, the young man’s academic achievements were average. Nevertheless, he was extremely popular. At that time, George Bush became the president of the fraternity known for its hooliganism, drunk fighting, and good sports achievements. Because of his fraternity’s actions, Bush was taken by the police twice.

In1968-1973, George served in the Texas Air National Guard and flew the F-102. Similar to his father, Bush Jr. proved to be a talented pilot, but he did not want to devote his life to military service. Thus, the would-be president entered the Harvard Business School and got the MBA degree.

Then, George came back to Midland and followed his father’s example: he began his own oil business but failed to soar to success. At that time, his father was working hard on his political career, and Bush Jr. participated in his pre-electoral campaigns. In 1977, the politician tried to stand for election to the US House of Representatives; he did not have enough votes.

As he celebrated his 40th birthday, Bush Jr. realized bitterly he had no reason to be happy. He decided to change something and gave up drinking for a start. Further on, the man agreed on merging his company with a large and respectable firm; in 1989, Bush and his investors bought the baseball club Texas Rangers. It was a favorable purchase: $600 000 of investment turned into $15 million in several years.

In 1994, Bush Jr. became the governor of Texas: 53.5% people voted for him. The politician recommended himself as a good leader. The measures he took were effective; thanks to his natural charm and the ability to smooth things over, George could talk to the opposition in an efficient way. The man’s height (182 cm.) also contributed to his positive image.

At that period, even some Democrats spoke of the Republican Bush Jr. favorably. Thanks to his image, he was elected the Governor of Texas again, and more people voted for him. Everybody aw Bush as one of the most probable candidates for the presidency.

The popular Republican began the presidential race with the primary election victory in his party. Then, George Walker Bush faced Albert Gore, the representative of the Democrats. Bush win in November 2000; it was one of the most scandalous electoral processes in the history of the US.

When the election results had already been announced officially, some ballot boxes with votes for Albert Gore were found in Texas. The new president’s brother Jeb Bush, the then Governor of Florida, was also dragged in a scandal: according to the opposition, he was pressing the Democrats in his state. In 2016, Jeb tried to run for the presidency, but his attempts were futile.

As the votes were revised, Albert Gore turned out to be the leader, and the difference was substantial: almost 500 000 votes. However, it is the Electoral College that addresses all controversies related to elections in America. According to the College’s decision, George Bush was inaugurated.

After the first term, the politician remained popular among people. In November 2004, he defeated the Democrat candidate John Kerry and became the President for the second time.

Although George Bush had to face several pressing issues, the overall economic indexes during his presidency were reasonably good. The state GDP was growing several percentages a year, and the inflation rates were no more than 1.5-2.5%. The unemployment level was pretty high, though: in 2003, it was 6%, and it lowered to 4.6% in 2006.

Experts believe the substantial unemployment levels were caused by the politician’s decisions. The wars in Iraq and Afghanistan became a severe blow to the economy: the military expenditures were more than those during the cold war.

The tax decrease rate program proved vain. As a result, many companies ceased to exist or shifted their production to developing countries.

George Bush Jr. was known as the proponent of racial equality. He became the first American President whose National Security Advisor of the United States and Secretary of State were black: before that, national minorities could not take such high positions.

The 43rd President introduced reforms in education, health care, and social welfare. Not all of them were successful, though: the social payment that the politician had emphasized during his pre-electoral campaign was not distributed among all those in need (unemployment was one of the core reasons).

In August 2005, the most disastrous hurricane, Katrina, devastated the south coast of America. Some 1500 people died; communication systems were destroyed, and population centers were drowned. Many professionals believe Bush Jr. failed because he did not take adequate measures corresponding to the crisis.

On September 11, 2001, George Walker Bush had to face the most difficult test: that day, several thousand people died due to the Al-Qaeda terrorist attack on the Twin Towers. Osama bin Laden who was hiding in Afghanistan was accused of the terrorist attack organization.

Military and diplomatic endeavor helped create a powerful coalition to fight in the territory of Afghanistan; eventually, the Taliban forces were defeated. At that challenging period, Bush’s most famous quote appeared: “We will smoke them out of their holes, we'll get them running, and we'll bring them to justice.”

The same year, the presidential administration announced the Anti-Ballistic Missile Treaty signed between the USA and the USSR twenty years earlier was withdrawn. This decision was explained by the necessity to provide the effective protection against terrorists.

In 2002, America declared the country would interfere with events on other territories to achieve democracy and a free market. In 2003, because of that law, the war in Iraq began. The Iraqi president Saddam Hussein was accused of supporting the terrorist movement and refused to cooperate with the UN.

The Russian politician Vladimir Zhirinovsky wrote to George Bush. He used a lot of swear words to explain to the President what The Near East politics was like and why the United States should not get involved there. Apparently, Zhirinovsky was no boss for Bush, and the war began.

In 1977, Bush Jr. married Laura Welch, the former librarian and teacher. In 1981, the twins, Jenna and Barbara, were born.

George Bush is known for his awkward behavior. The photos where the President was holding the binoculars in a wrong way, struggled with his raincoat, tried to tame a piece of rebellious polyethylene, and the videos where Bush fell from a Segway or a bicycle became Internet memes.

The Republican does not seem to be offended by such jokes. Once, he and his double appeared in front of the White House Correspondents' Association.

There were many speculations in the press that George Bush concerted to Islam. In fact, the politician is a Methodist and demonstrated his respect for Muslims to improve the country’s international image. Rumors had it the president’s daughter converted to Islam, but no proof was ever presented.

Today, George Bush Jr. often goes out in public, communicates with people, and reluctantly answers the question about his age. He also appears in movies (mostly documentaries) and even writes books: his memoirs are bestselling in the United States.

Just like in his youth, George charms people, and his wife accompanies her husband and continues to sustain the image of the elegant First Lady. 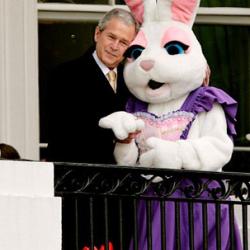