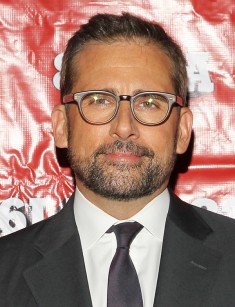 Steven John Carell who appear in the credits under the short name of Steve Carell – is an American actor and comedian, who is most famous due to his role of the careless manager Michael Scott in the comic TV under the title The Office. Also, Steve Carell has become world famous due to the movies Bruce Almighty, The 40-Year-Old Virgin, Evan Almighty, Dan in Real Life, Alexander and the Terrible, Horrible, No Good, Very Bad Day and others. By the version of authoritative Life magazine, he is the most amusing person in the USA.

Steve Carell was born in the small town of Concord situated in the State of Massachusetts. The boy's father Edwin Carell was an electrical engineer, and his mother Harriet Theresa Koch was working as a nurse at the mental hospital. Steve became the fourth kid in their family: he has three major brothers. It’s interesting that Edwin at the birth had an Italian surname – Caroselli as he had an Italian background. But, when he became mature, Steve Carell's father shortened surname to a more habitual to the American hearing.

Stephen has got Roman Catholic education and attended Nashoba Brooks, Fenn and Middlesex comprehensive schools. Being a teenager Steve Carell got fond of hockey, he stood at the gate at first for the school team and later for the college team of Denison University in the State of Ohio. Here the young man was studying History of the United States. Moreover, Carell played lacrosse and also was a member of the national team of his university.

After the completion of the studies at the university Steve Carell was going to attend the law school but during the interview, he couldn't explain why he wanted to become a lawyer that's why the guy wasn't admitted to the university. The young man worked partly as a postman in Littleton to earn his living; then he worked as a DJ on the radio. At that time he decided that he wanted to become an actor and entered the duplicating part Chicago troupe. There Steve was noticed for the first time and was invited to the movie set.

From the theatre stage, Steve Carell got to cinematography and on the television. For the first time, this happened in 1991 when he performed the role of Tesio in the family comedy Curly Sue. The actor had to wait for the next invitation to play a role in the movie for twelve years. During this period he did his career of the comic in the TV shows. The actor appeared in the sketches The Dana Carvey Show and Just Shoot Me!. For a sitcom under the title Over The Top Steve Carell took part in a couple of tens series though only three of them came out on the screen.

The American humorous television program The Daily Show which is a kind of parody to the informational programs was much more successful. Steve Carell embodied the special correspondent for five years. In 2005 the actor received the invitation to take part in the new sitcom The Office in which he received the personage of manager Michael Scott. The first season turned out to be a failure, and the owners of the TV channel decided to stop the shootings of the sequel.

Exactly at that moment there was released the comedy movie The 40-Year-Old Virgin which has brought popularity to Steve Carell. The directors decided to release the second season of the sitcom The Office. That time the comedy was extremely successful and later transformed into the 9-season series. However, Carell left the show in 2011 and decided not to prolong the contract.

During the shootings in this sitcom, the actor at the same time worked with Nicole Kidman in the comedy under the title Bewitched, with Jim Carrey in the picture Bruce Almighty, with Morgan Freeman in the sequel Evan Almighty, with Seth Rogen in the comic movie Knocked Up. Moreover, Steve Carell became the star of the comedies Crazy, Stupid, Love, Dinner for Schmucks, Date Night and Dan in Real Life.

The plot of one more comic movie, Get Smart, take place on the territory of the USA and in Russia. That’s why in 2007 Carell came to Moscow for the production value. Because of the discussions of the forthcoming doomsday, the fantastic comedy under the title Seeking a Friend for the End of the World interested the audience. In this movie, Steve cooperated with Keira Knightley. The comedy about the magicians under the title The Incredible Burt Wonderstone and the melodrama The Way Way Back were successful in the hire and earned huge box office. In the latter movie except for Steve Carell the actress AnnaSophia Robb played the role.

Also, Steve Carell has in his filmography a project which doesn’t relate to the comedies. This is the historical sports drama Foxcatcher. It's noteworthy that this work has brought the actor his first and yet only nomination for the Academic Awards. It's worth noting the family comedy Alexander and the Terrible, Horrible, No Good, Very Bad Day, the drama with Brad Pitt under the title The Big Short, the social picture with Julianne Moore – Freeheld and the romantic story Café Society directed by Woody Allen.

In his acting career, Steve has also tried himself as the actor of voicing. The leading personage Gru in the animated series Despicable Me speaks with the voice of Carell. In the next two parts the actor again voiced-over his character.

Also, the actor has voiced-over the heroes of the animated series Minions and Over the Hedge.

In the nineties, Steve Carell had an experience of teaching acting at the improvisation courses of dramatic arts. During one of the lessons he got acquainted with the student Nancy Walls, and they began to have a relationship. In 1995 they got married and celebrated their wedding, and Steve Carell’s wife took his surname. As Nancy Carell, she appeared together with her husband in The Daily Show, in the sitcom The Office and in a couple of movies where his husband played the leading roles.

Steve and Nancy had two children: their daughter Elisabeth Anne who was born at the end of May of 2001 and the son John who is three years younger than him. The family has settled in Los Angeles. Some time they owned the famous Marshfield-Hillz historical department store popular in Massachusetts, but in 2009 Steve Carell resold shop to other people.

The actor Steve Carell is a skilled, qualified skater. He still has his children's hobby for playing hockey. The man plays in the amateur team which appears in the nonprofessional league of Los Angeles. Carell still stands at the hockey gate.

Unlike other Hollywood celebrities, Steve Carell doesn’t lead a microblog on Instagram. The admirers of the actor’s talent do this instead of him. They post his different personal and professional photos found on the web.

And Carell himself shares his posts on official Twitter. Here the actor has millions of readers.

In September of 2017, the actor appeared in the sports drama comedy Battle of the Sexes. In this picture, he again collaborated with Emma Stone. The plot of the movie is based on the conflict of the tennis player Bobby Riggs and tennis-player Billie Jean King, which really happened in real life in 1973.

The same year there was held the premiere of the drama Last Flag Flying directed by Richard Linklater where there appeared the great actors – Steve Carell, Bryan Cranston, Laurence Fishburne.

In April of 2018, the actor appeared on CINEMACON-2018 where her presented the forthcoming movie under the title Beautiful Boy in which he played the major role. The movie represents the story of the recovery of the guy from drug addiction but from the point of view of his father.

Later the audience will see their favorite actor in the drama Welcome to Marwen. Steve received the role of the man called Mark Hogancamp. He became the victim of the attack in the street. The character managed to cope with psychological trauma due to "puppet therapy." As a result, in the yard of his house, the man built the toy town of the times of the Second World War, and he inhabited this town with the figures which look similar to the people from his past.

In December there will come out the drama Prompter about the 46th USA vice president Dick Cheney whose role will be performed by Christian Bale. Steve will perform the role of the politician Donald Rumsfeld. Also, Amy Adams, Sam Rockwell, Bill Pullman, and others will appear in the picture.

The projects under the titles She Came to Me, and Juvenile with the participation of Carell in the leading roles are in production at present.

Moreover, Steve will appear in the drama Dogs of Babel. This picture will tell a story about the linguist Paul Iverson who can’t overcome the death of his beloved wife who died by ridiculous accident. However, Paul is sure that his wife was killed. But there are no any proofs of this crime. The dog nicknamed Lorelei is the only witness of the incident. Finally, Iverson takes an attempt to teach Lorelei to talk to find out the truth about the death of his beloved woman. 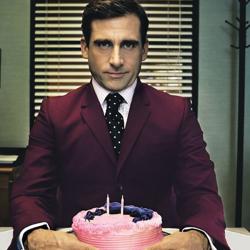