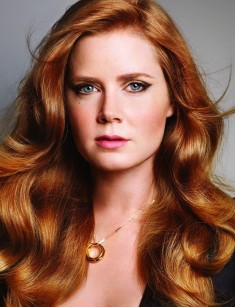 Amy Adams is an American actress and singer who has become world famous due to her appearance in the independent movie Junebug and also to the fairy tale Enchanted and the comedy American Hustle.

Amy Adams was born in the city of Vicenza, but the actress doesn’t have Italian roots. The matter is that the girl's father, Richard Kent, was a professional military and then he was serving on Caserma Ederle military base in Italy. His family has moved together with him – his wife Kathryn Adams and their children. Amy was born the fourth in the family, and Kent and Kathryn gave birth to two daughters and four sons.

When the future actress turned eight years, her family came back to America and settled in the Castle Rock, in the State of Colorado. Her father has retired and began to perform in the restaurants as a singer, and her mother has got engaged in the bodybuilding and has achieved success in this sphere. Three years later the spouses divorced.

Amy Adams who stayed with her mother when she was a child, she sang in the school chorus. Also, she went in for athleticism and acrobatics and, moreover, she attended the ballet school. The girl wanted so much to become a ballerina that she gave up the sport and studies. As a result, she lost her chance to enter the college, and she hadn’t enough skills for professional ballet. The girl had to work partly as a sales-assistant and a waitress, and at the same time, she performed in the amateur musical theater.

It was there, where the director of the popular Minneapolis-based Chanhassen Dinner Theater - Michael Brindisi noticed the girl and invited her to his troupe. The actress was happy to work there, but after her first try in the cinema, she set off for Los Angeles to try to make the career in the movie industry.

It’s noteworthy that the debut of the actress in the satirical comedy Drop Dead Gorgeous took place only because Amy Adams injured her leg, having stretched the muscles and couldn't act in the theater for several months. The movie directors have seen in the girl a versatile actress. In the late nineties, Amy who was 163 cm tall already took part in the fantastic fighter Buffy the Vampire Slayer, in the mystical series Enchanted and the melodrama under the title Providence. The actress performed the supporting role of Dinah in the comedy Zoe, Duncan, Jack and Jane.

In 2000 the girl successfully passed the casting for the role in the prequel to the movie Cruel Intentions and received the leading role of Kathryn Merteuil – the stepsister of the character of Sebastian Valmont (Robin Dunne). Sebastian moves to New York and enters the same college together with his relative. A year later the actress appeared in the cast of the fantastic series Smallville about the formation of the Superman and his heroic deeds. Amy performed the supporting role of Jodi Melville.

The same year the actress got to the movie set of the political drama The West Wing which was shot by the request of NBC TV channel. In this picture, Amy has transformed into the character of Cathy. Also, Amy Adams took part in the series Pumpkin and Servin Sara.

Later the actress participated in a range of low budget movies. Only in 2002, she got a role in the remarkable picture which has brought cardinal changes to Amy Adams’ creative career.

It was a gripping movie Catch Me if You Can where the girl played the role of the nurse Brenda Strong, the brides of Leonardo DiCaprio’s character. Tom Hanks also appeared in this movie and had played his part brilliantly. The director Steven Spielberg was sure that since then Adams would have lots of interesting scripts. Though, in reality, the actress hasn't received any invitations for a year. The movie has earned $350 million to the creators.

After a short break in 2004, Amy shot in the crime series Dr. Vegas and also got the leading role in the comedy The Last Run in which Fred Savage became the partner of the actress. In a year Adams enriched her filmography with the part in the comedy-drama Junebug in which Amy transformed into the wife of the character Johnny (Ben McKenzie).

Once the elder brother George (Alessandro Nivola) comes to the house of the spouses and his relatives to acquaint his relatives with his young wife Madeleine (Embeth Davidtz). At the same time, the actress appeared in the melodrama The Wedding Date where she acted as a bride. According to the plot, her elder sister Kat (Debra Messing) has arrived at her wedding.

In 2005 Amy accepted the invitation to take part in the creation of the non-commercial movie Junebug. The picture was shot for 21 days only. The actress not only has become famous after this movie but also received some positive reviews from the critics. But Amy received true glory after the release of the light romantic fairy tale Enchanted in which she got the role of the princess Giselle. Patrick Dempsey became Amy's partner on the movie set.

Since that moment the actress could choose the scripts and plots at her own will. Adams appeared together with Meryl Streep in the tragicomedy Julie & Julia, with Ben Stiller in the fantastic comedy Night at the Museum: Battle of the Smithsonian, with Clint Eastwood in the sports drama Trouble with the Curve, with Bradley Cooper - in the extravagant story under the title American Hustle. Also, in her assets, Amy Adams has the shootings in the screen versions of the comics Man of Steel and Batman v Superman: Dawn of Justice. Moreover, the actress took part in the melodrama Love & Distrust, the comedy Miss Pettigrew Lives for a Day, the drama Sunshine Cleaning.

By the way, in a number of the movies, Amy Adams appears as an actress and as a performer of the soundtracks. The girl was a singer already in the theatrical plays, and later she continued to demonstrate her vocal skills in the movies.

In amateur theater studio, Amy Adams got acquainted with the professional artist Darren Le Gallo who was also engaged in the theater and tried himself as an actor. The young people began to meet each other, and they were living in civil marriage for fourteen years.

In 2008 the couple announced their engagement. Two years later Amy gave birth to their daughter Aviana Olea Le Gallo. But they didn’t have an official wedding ceremony. And only on the 2nd of May, 2015 the actress Amy Adams and the artist Darren Le Gallo celebrated their wedding and became the husband and the wife, having officially registered their relationship.

The actress doesn't keep the events of her private life in secret from her fans and mass media. Though, Amy Adams doesn’t have pages on the social networks and Instagram. One can see Amy's family photos only in the open sources of information.

In 2016 there came out the psychological thriller Nocturnal Animals with the participation of Amy Adams. In this picture, the actress received the significant role of the heroine Susan Morrow who tried to figure out the problematic relations with her ex-husband - the writer Edward Sheffield. The same year there came out the fantastic drama Arrival about the appearance of the objects of extraterrestrial origin in the atmosphere.

In the superheroic fighter released in 2017 under the title Justice League, the actress has got the supporting role of Lois Lane. Ben Affleck, Henry Cavill, Gal Gadot, Jason Momoa and Ezra Miller played the parts of the leading characters Batman, Superman, Wonder Woman, Aquaman, and Flash respectively.

At the beginning of 2017, the actress was honored to receive her star on the Hollywood Walk of Fame. Amy Adams's spouse, her daughter and her colleagues on the movies Arrival and American Hustle – the director Denis Villeneuve and the actor Jeremy Renner arrived at the solemn event of the laying of the stone.

At present Amy Adams is working on the new projects – the series Sharp Objects and the second part of the fairy-tale Enchanted.

Amy Adams's admirers repeatedly noticed that she looked similar to the other media person – the Australian actress Isla Fisher who became famous after the release of the movies Scooby Doo and Shopaholic.

Also, Amy Adams resembles the Hollywood star Nicole Kidman by her appearance. Both actresses are friendly to each other. In February 2017 Amy and Nicole attended the BAFTA Awards ceremony in London. 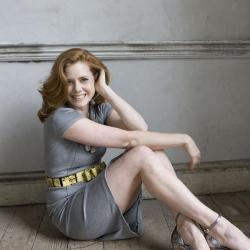