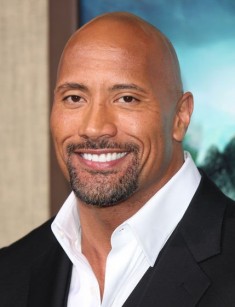 Dwayne Johnson is known by his ring name The Rock. Dwayne Johnson is an actor, wrestler. He was listed in the Guinness World Records as the highest-paid actor in his first starring role. The actor received US$5,5 million for the debut role in the movie The Mummy Returns. Viewers also remember Dwayne Johnson in such popular films as The Mummy Returns, Walking Tall, The Rundown, Doom, Tooth Fairy, The Other Guys, G.I. Joe: Retaliation, Hercules and in a number of films of The Fast and The Furious franchise.

Dwayne was born on May 2, 1972, in America. Dwayne Johnson is also an ethnic Polynesian and black Canadian (Nova Scotian), but what is more important The Rock comes from a family of wrestlers. Dwayne's grandfather, father, uncles, cousins got living by wrestling. Even his mother and grandmother were involved in wrestling, the mother was the promoter of her husband, and his grandmother was the director of the female club. His father constantly moved from place to place, so Dwayne changed many schools. He studied in New Zealand, Hawaii, and graduated in Pennsylvania.

Since an early age, Johnson Jr. attended the training of his father, and at the age of 12, he took a crack at lifting the bar but failed. From that moment his father trained the boy himself.

In high school, the guy started playing football and showed such good results that several universities offered him studying. Dwayne enrolled in the Psychology and Criminology Department of the University of Miami and successfully graduated in 1995. He could have continued his career in football, but a back injury sidelined him. Then Johnson got into wrestling.

Dwayne’s debut took place in autumn 1996. He appeared in front of the audience as Rocky Maivia, and by the end of the same year, he had already won the first Championship.

The wrestler tried to act fairly without violating the rules. At first, spectators liked it, but they quickly became bothered. During the matches, they often catcalled Johnson, demanded that he left. The athlete decided to take a break.

Dwayne returned to the ring as a bad guy, The Rock. This name distinguished the outstanding parameters of the wrestler (Dwayne Johnson’s height is 196 cm and the weight is 118 kg). The new image and style of the fight brought the wrestler popularity. Dwayne called himself the "The People's Champion" as the audience loved and supported him. After returning and until the end of the career of the wrestler, The Rock became 17-time World Champion.

Dwayne Johnson’s creative biography in the cinema began with a smash hit. Hollywood directors became interested in Johnson in 2000, after the release of his book “The Rock Says.” The same year he was invited to play in the movie The Mummy Returns. For this work, the debutant actor received an unprecedented fee of $ 5.5 million, and he was listed in the Guinness World Records.

His next role was a lead one. Dwayne Johnson starred in the movie The Scorpion King. In 2011, the shooting of Fast Five with his participation began. The films The Fast and The Furious focus on the races and the confrontation of criminals and the police which is solved with the help of cars. Dwayne Johnson joined the popular franchise from the fifth installment. The role of the agent Hobbs was changed especially for the actor. Vin Diesel played the main role in this film as well as in other movies of the series.

Dwayne Johnson stars not only in action movies. He also plays well in comedies. For example, he starred in the Tooth Fairy and The Game Plan.

In 2014, the premiere of Hercules took place with Johnson in the main role. In the spring of the following year, Furious 7 was released with the participation of the actor, and in 2016 the comedy Central Intelligence appeared too. Dwayne Jones played the main role of agent Bob Stone in the action comedy. When the agent was a child, he grew up as a stout boy and was laughed at by his classmates, but later he became a super-spy with impressive muscles. Bob takes an old friend (Kevin Hart) for a partner, the latter works as an accountant and only dreams of adventures, chases, and skirmishes.

In 2016, Dwayne Johnson also voiced Maui in the animated film Moana. Maui is an egotistic demigod and the second main character together with the daughter of the chief, Moana. The heroes need to find a common ground and fulfill the main mission: to bring back the heart of the goddess, which was stolen by Maui.

Dwayne’s popularity is constantly growing. His shooting is scheduled for years ahead, and there are nearly 100 million subscribers on Duane Johnson's Instagram account.

Dwayne Johnson dated Dany Garcia for almost seven years. The actor saw the Cuban when he studied at the University, and he fell in love. They lived in a common-law marriage for seven years, and in 1999 they officially married.

In August 2001, Johnson became a happy father. His wife gave birth to the actor’s daughter. Dany and Dwayne lived together for six more years, and then officially announced that they broke up. The actor's daughter lives with his ex-wife, and Johnson provides maintenance for the child. After the divorce, the couple managed to maintain friendly relations.

Soon after the divorce, Dwayne Johnson began dating Lauren Hashian. On December 16, 2015, it became known that Dwayne became the father of two children. His new lover gave birth to the actor’s daughter, Jasmine.

Dwayne Johnson's left arm, part of the back and the chest are covered with the tattoo. This is a partial Polynesian tattoo, which is made according to the Samoan culture. It contains the life story of the wrestler and Dwayne’s personal values.

In April 2017, the new film The Fate of the Furious of The Fast and The Furious franchise was released. The film, as well as the previous installments, are filled with street races, crimes, and chases. Nevertheless, the characters develop throughout the films. Dominic (Vin Diesel) celebrates the honeymoon with his beloved wife, and at the end of the film becomes a father. However, participation in skirmishes and covert operations do not disturb family happiness.

Dwayne Johnson has also returned to the role of agent Luke Hobbes, who emerged to prominence and is considered the second main hero in The Fate of the Furious. During the preview of the film, Dwayne Johnson also spoke at the possibility of the release of a separate spin-off about Luke Hobbs.

In the summer of 2017, the actor appeared in the lead role in the comedy Baywatch, which is the film version of the popular American television series. Dwayne’s hero is an experienced beach lifeguard who works together with the team on the Pacific coast.

The slow-paced life of the rescuers is disturbed by the frightening news that the beach they are familiar with may soon disappear. The ownership of the nightclub, which is also involved in the local drug business, began to buy places and wants to get the beach into personal property. Rescuers defend their native coast in every possible way.

On December 28, 2017, the actor will appear in the lead role in the adventure film Jumanji: Welcome to the Jungle, the sequel to the famous film Jumanji. This time the action takes place not in the table game, but in the video game.

Children, who decide to play Jumanji, do not bring animals and cataclysms in their own house, but they move to the jungle into the game world. They make it in an unusual way. The players get avatars that do not look like their own bodies and personality.

A shy boy becomes a tall traveler hero (Dwayne Johnson). A clumsy, notorious girl gets a body of an adroit Amazon. But a husky rowdy and the most beautiful girl at school are not so lucky. Both got avatars of short, awkward men. Children have to get used to new images, find hidden advantages and disadvantages, become a close-knit team and, of course, encounter rhinoceroses, black mambas, and mysterious traps.

The movie trailer caused mixed reviews. On the one hand, viewers noted a qualitative design of the game world, on the other hand, they called not to touch the childhood film and criticized the Amazon’s inappropriate outfit, which was unsuitable for a hike into the jungle.

In 2018, three films with the participation of Dwayne Johnson have already been announced. In April 2018, the actor will appear in the role of primatologist in the fantastic action movie Rampage about experiments on animals and about the riot of genetically modified animals. In July, the actor will appear in the action movie Skyscraper. The same year, he announced the participation in the comedy Fighting with My Family.

In 2019, Dwayne Johnson will appear in the role of Black Adam in the superhero film Shazam. The story takes place in the DC universe. In addition, the actor has announced that he agreed to play Black Adam in all upcoming film franchises. 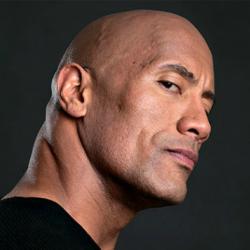