Historians do not know an accurate date of birth of the narrator. The poet’s place of birth also remains a mystery. Historians believe that Homer lived in the X-VIII century BC. The poet’s homeland is considered one of six cities: Athens, Rhodes, Chios, Salamis, Smyrna, Argos.

At different times, a lot of authors mentioned more than a dozen other Homer’s birthplaces in ancient Greece. Smyrna is often considered his native town. The works of Homer tells about the ancient history of the world, they do not mention his contemporaries, which makes it complicated determine the author's period of life. There is a legend that Homer did not know the place of his birth. The Oracle told the narrator that the island of Ios was his mother’s birthplace.

Biographical information about the life of the narrator, mentioned in medieval works, makes historians doubt. It is mentioned in the works about the poet’s life that the poet was named Homer because of his acquired blindness. The name can be translated as "blind". At birth, his mother named him Melesigen, which means "born on the river Meles". According to one legend, Homer became blind when he saw the sword of Achilles. The goddess Thetis gave him the gift of chanting for consolation.

There is a version that the poet did not "follow", but "lead". He was named Homer, not after the narrator became blind, but on the contrary when he received his sight and began to speak wisely. According to the majority of Ancient biographers, a woman named Crifeida gave birth to Melesigen.

The narrator performed at the feasts of notable people, at city meetings, at markets. According to historians, Ancient Greece experienced its heyday during the life of Homer. The poet recited separate parts from his works, traveling from city to city. He got respect, had a nights lodging, food, and he was not a dirty wanderer, how some biographers describe him.

There is a version that Odyssey, Iliad and Homeric Hymns are the works of different authors, and Homer was only their performer. Historians consider the idea that the poet belonged to a family of singers. In Ancient Greece, handicraft and other professions were often hand down from generation to generation. In this case, any member of the family could perform under the name of Homer. Stories and style of performance were passed down to relatives through generations. This fact could explain the different period of the creation of poems, and clarify the problem with the narrator’s date of birth.

One of the most detailed descriptions of the development of Homer as a poet belongs to Herodotus of Halicarnassus. Cicero called him “the father of history”. According to the ancient historian, the poet was named Melesigen at birth. He lived with his mother in Smyrna, where he became a pupil at the school of Phemios. Melesigen was very intelligent and good at science.

The teacher died, leaving school to his best pupil. Having worked as a teacher for a while, Melesigen decided to deepen his knowledge of the world. A man named Mentes wanted to help him. He was from the island of Lefkada. Melesigen closed the school and went on a friend’s ship on a sea voyage to see new cities and countries.

During the journey, the former teacher collected stories, legends, asked about the customs of the local people. Arriving in Ithaca, Melesigen felt ill. Mentes left the poet under the supervision of a reliable man and sailed to his homeland. Later, Melesigen wandered on foot. On the way, he recited the stories that he had collected during his traveling.

According to Herodotus of Halicarnassus, the storyteller finally became blind in the city of Colophon. There he changed his name. Modern researchers are inclined to doubt Herodotus’s story, as well as the writings of other ancient authors about the life of Homer.

In 1795 Friedrich August Wolff in the preface to the publication of the poem of the ancient Greek narrator put forward a theory that was called the Homeric question. The scientist's main point was that poetry was oral art in the time of Homer. The blind wandering narrator could not be the author of complex poems.

Homer composed songs, hymns, musical epics, which formed the basis of the Iliad and Odyssey. According to Wolff, the poems were finished by other authors. Since then, scientists, that are involved in the work of Homer, have divided into two groups, the "analysts" who support the theory of Wolff, and the "unitarians" who hold opinions on the strict unity of the epic.

Some researchers of Homer's work say that the poet was able to see. One fact speaks in favor of this theory as philosophers and thinkers were considered in Ancient Greece people deprived of ordinary sight but having the gift of looking at the essence of things. Blindness could be synonymous with wisdom. Homer was considered one of the creators of a comprehensive view of the world, the author of the genealogy of the gods. His wisdom was obvious to everyone.

Ancient biographers created the exact portrait of Homer the Blind in their works, but they composed their works many centuries after the death of the poet. Since reliable data on the life of the poet did not survive, the handling of ancient biographers might not be entirely correct. One more fact proves this idea as there are fictional events with mythical characters in all biographies.

The preserved ancient evidence gives an idea that Homer's works were considered a source of wisdom in the Ancient world. The poems gave knowledge about all spheres of life from human morality to the basis of military art.

Plutarch wrote that the outstanding commander Alexander the Great always kept a copy of the Iliad. Greek children were taught to read the Odyssey, and Pythagoreans prescribed some specimens from Homer’s works as a means to heal the soul.

Homer is considered the author of not only the Iliad and Odyssey. The narrator could be the creator of the comic poem Margites and Homeric Hymns. There is also a cycle of texts about the return of the heroes of the Trojan War to Greece: Cypria, Iliupersis, Aethiopis, Little Iliad, Nostoi. Homer's poems are distinguished by a special language that did not have an analog in colloquial speech. The style of narration made the stories memorable and interesting.

There is a legend that describes the death of Homer. The blind narrator went to the island of Ios in his old age. While traveling, Homer met two young fishermen who asked him a riddle “We have something that we did not catch, and what we caught, we threw out”. The poet thought over the solution of the puzzle for a long time, but he could not find the right answer. Boys caught lice, but not fish. Homer was so annoyed that he could not solve the riddle that he slipped and hit his head.

According to another version, the narrator committed suicide, since death was not so terrible for him in comparison with the loss of pungency of wit.

• There are about a dozen narrator’s biographies, which have survived from antiquity, but they all contain fabulous elements and mention the participation of the Ancient Greek gods in Homer's life.

• The poet distributed his works outside of Ancient Greece with the help of descendants. They were called Homerids. They traveled to different cities, performing their teacher's works in the squares.

• Homer's works were very popular in Ancient Greece. About half of all found papyrus Ancient Greek scrolls are excerpts from various poet’s works.

• People handed down the narrator's compositions. The poems that we know today were collected and structured from scattered songs by the army of the poets of Peisistratus, the tyrant of Athens. Some parts of the texts have been edited according to the wishes of the tyrant.

• The Soviet prose writer Osip Mandelshtam wrote the poem Insomnia. Homer in 1915, where he appealed to the storyteller and heroes of the poem Iliad.

• Until the mid-1970’s of the twentieth century, the events described in Homer's poems were considered pure fiction. But the archaeological expedition of Heinrich Schliemann, who found Troy, proved that the work of the ancient Greek poet is based on real events. After the discovery, Plato's admirers strengthened their hope that one day archaeologists would find Atlantis. 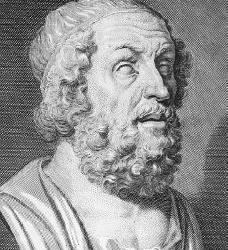