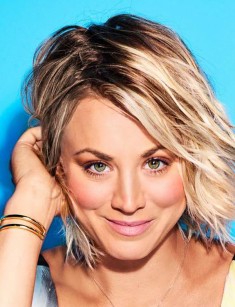 The famous movie actress Kaley Cuoco was born on November 39, 1985, in the city Camarillo in California. Her mother took care of household chores and paid much attention to Kaley’s and her younger sister Briana’s bringing-up. The would-be actress’s father was of the Italian origin and worked as a real estate agent in a small company. When Kaley turned 3, her parents sent the girl to a tennis club.

Later, Kaley Cuoco realized herself in this sport and dreamed of becoming a professional tennis player even when she became adult.

It is interesting that Kaley was engaged in self-study and had a secondary education certificate at 16.

Kaley’s TV career began when she was a small child: at 8 months, she was selected to take part in a children’s toys and diapers advertisement. As the girl was growing, she took up acting classes and was offered to star in a Barbie advertisement at 6. Kaley also participated in theater performances. However, she had the first significant shooting offer only in 1992 when she was selected for the role of Connie Reinhardt in the movie “Quicksand: No Escape.” In the same year, she played Karin Carter in the movie “Virtuosity” and collaborated with Denzel Washington and Russell Crowe. After these roles, Kaley participated in short movies and portrayed Charlotte Stillwater in a mini-series.

The actress received the first glory in 2002 after she appeared on the screen as Bridget Erin Hennessy in the multipart teenage comedy “8 Simple Rules.” Thanks to this role, Kaley Cuoco rose to fame overnight one day and had never run out of job offers: they started overflowing her.

In 2004, the actress appeared in four movies, the most successful of which was “Charmed” where Kaley played the role of Billie. In 2007, the young woman was offered the role of a waitress in the comedy series “Big Bang Theory” starring Johnny Galecki and Jim Parsons. The project became the longest and the most beneficial work of the actress. The series ratings were increasing, so were her fees. In 2010, Cuocu was paid $200 thousand for an episode.

In September 2010, the actress had an accident when she was riding a horse: she fell and badly injured her leg. The fracture was so serious that doctors feared the leg should be amputated. Fortunately, everything ended well. As Kaley came back to the movie set, she had to remain in a seated position or stand behind the bar so that the actress’s leg put in a plaster would not be seen by viewers.

Just like the majority of Hollywood stars, Kaley tries not to make her personal life public. Still, some information is leaked to media despite the actress’s endeavor, and millions of fans have the opportunity to watch her “secret” life. For instance, journalists discovered that the actress had the first serious relationship with her “Big Bang Theory” series partner Johnny Galecki. Although their affair lasted more than two years, their photos together never appeared in glossy magazines and newspapers. The star couple told journalists the truth only six months after their breakup; they said that they got sick of hiding from reporters. Today, they communicate on friendly terms only.

After the actress and Johnny Galecki split up, the actress had two short affairs with the actor Henry Cavill and Moore Joel. In summer 2013, Kaley met the tennis player Ryan Sweeting who was a couple of years younger than she. Their relationship was so stormy that the couple announced their engagement in September of that year. Rumor had it that approximately 200 guests were invited to the wedding ceremony which was held in the luxurious rancho in California. Still, the marriage did not last long: in 2016, the couple divorced.

As Kaley told journalists many times, it was extremely difficult for her to go through the divorce. According to her, she deleted all photos with Ryan Sweeting in her Instagram so that nothing would remind her of the ex-husband. Nevertheless, the media informed soon that the star had a new affair with 45-year-old actor Paul Blackthorne known for the series “The Flash” and “Arrow.” It did not last long.

Today, Kaley has the relationship with Carl Cook; it looks like the actress’s life will change soon. In the photo dated back to 2017 in Kaley’s Instagram, there was a gold ring with a large diamond on the movie star’s ring finger. The photo provoked numerous questions among the actress’s fans. Later, the couple officially announced their engagement.

At the moment, Kaley has not quitted her acting career: she takes part in movies and tried herself as a photo model. Her photos are published in many high-ranking magazines including Maxim, Allure, and FHM. In 2011, Kaley placed 13th in the Maxim “Hot100” rating. FHM gave her 57th position in the rating of the sexiest women in the world.

In 2014, Kaley Cuoco was nominated for “The 40th People’s Choice Award 2014.” The star did win her prize and became the best comedy actress. However, it was not the only reason for Kaley’s fans’ delight: many media published her funny pictures with the actor Ian Somerhalder who won several awards at the ceremony.

In the same year, Kaley Cuoco became the victim of the notorious leak of data: hackers stole her nude photos and uploaded them on the Internet. The actress was not very much upset about it. She even decided to strip her breast in order to disapprove of the intruders’ actions. Kaley has never kept in secret the fact that she had a breast augmentation surgery at 18. Cuoco believes that she has nothing to be ashamed of; she is proud of her decision.

The actress leads a healthy lifestyle and considers herself a happy, successful woman. She is a vegetarian; she is also fond of sport and riding. 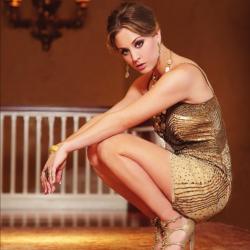