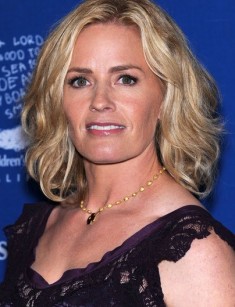 Elisabeth Judson Shue was born in fall 1963 in the American state Delaware. The would-be Hollywood star spent her childhood and youth in the town Wilmington. Elisabeth’s parents reached a substantial success: the mother Anne Wells was the Vice President of a bank, and the father James William Shue was a famous lawyer who made much progress in politics and even ran for Congress to represent the Republican Party.

Elisabeth’s family is of the noble origin and traces its roots to the English emigrants who moved to America in the 17###sup/sup### century. There were three children in the family except for the daughter: the sons Will, Andrew, and John. Elisabeth Shue could not but become the fourth boy: she played soccer with her brothers, learned how to play rugby, took a dive in a pond boldly, and climbed up a tree in a blink of an eye. The family owned a huge mansion in the village where children could enjoy in the field.

The girl’s childhood came to an end when she was 11: the parents made a decision to divorce. Elisabeth turned into a troubled teenager: she neglected her studies, smoked weed, and came back home at night. When the girl was 15, a police officer stopped her car. Perhaps, it was the first acting experience of Shue: she played an adult woman impeccably, and the cop let her go.

At 16, Elisabeth Shue finally realized she was a young woman. When she was falling into old habits and played football, boys did not view her as a game partner. However, Elisabeth was not ready for these changes. She remembered how painful the parents’ divorce was for her and feared that her life would turn in the same direction. That is why Shue avoided relationships with the opposite sex while her peers were boasting their affairs.

As she finished middle school in New Jersey, Shue entered the Harvard University where her mother used to study. At this time, Elisabeth Shue’s acting career was developing rapidly, and the young woman dropped the studies although there was only one term left.

Lis appeared on the screen quite early, at 16. The restaurant “Burger King” starred the charming, angel-like girl in its advertisement. The debut was so successful that Shue found herself in the dream factory. She received the first significant role in the series “Call to Glory” – and the title turned out to be prophetic. Soon, Elisabeth played the main character’s girlfriend in the movie “The Karate Kid.”

The image of a pretty, unpretentious girl who would become a good guy’s trophy at the end of a movie stuck to Shue. Lis hated the characters she had to play. She could hardly make herself agree to play another role of a “trophy” girl similar to the previous one as two peas. She was convincing herself she was a Hollywood actress.

It was the death of the dearly loved brother Will that made Lis ponder her future and reverse the situation. The brother died in her arms. Shue sank into a serious depression. She refused to star in movies, visited a psychotherapist on a regular basis, and considered committing suicide.

As she survived the terrible pain, Elisabeth changed. Movie directors might have noticed that – the actress was offered different, deeper roles.

The movies “Link,” “Adventures in Babysitting,” and “Back to the Future” became the first successful TV projects that made Elisabeth Shue recognizable.

The projects “Leaving Las Vegas,” “Hollow Man,” and “The Saint” brought her fame and the status of a Hollywood star.

Shue played a prostitute in the drama “Leaving Las Vegas” by Mike Figgis – she accepted the role in spite of people’s expectations. Lis’s manager believed that this movie would put an end to her career, and even the movie director discouraged her from it. The actress took the role and benefited – for the first time, she was nominated for the Academy Award. Although she did not win the victory, the nomination brought her to the top of the movie Olympus. Besides, she was nominated for the Independent Spirit Award, the Golden Globe Award, the Screen Actors Guild Award, and BAFTA.

The action movie “The Saint” and the thriller “Hollow Man” reinforced Shue’s success and made her famous all over the globe. The latter project about human faults was created by the well-known Paul Verhoeven. Shue played a physicist Linda McKay. It was difficult for Lis to work on this movie full of blood, violence, and falling into an abyss. During the shooting, the actress broke her leg. The studio insisted that Verhoeven should replace the actress and continue to work on the project, but the director refused. He liked the actress so much that the movie production was postponed until Elisabeth got well. In return, the actress started working two months earlier than she recovered. She was vigorously fighting her limping for two months.

The movie’s success justified the effort: the project’s box office equaled $70 million, and Shue received numerous awards. Besides, 21-year-old Lis came back to Harvard, finished her studies, and became the fourth woman in her family who got the higher education in the famous university.

Elisabeth Shue met her future husband at the most grievous and dramatic period of her life when she was going through her brother’s death. The producer David Guggenheim had also a hard time. He had reached a lot: a prestigious job, financial stability, and even his own movie-making company. However, he dreamed of something large-scale: movie directing. David’s fear and lack of self-confidence prevented him from moving forward.

The couple met and realized that they found the missing person who would help their cherished dreams come true.

Guggenheim started making movies soon, and Shue became famous after the drama “Leaving Las Vegas” where she fought for the role came out.

Elisabeth Shue’s personal life was almost ruined when the drama “The Saint” was being made in Britain. Her partner Val Kilmer was emotional over his divorce with the actress Joanne Whalley. Lis did not know about Kilmer’s plans to revenge on his former wife and accepted his invitation to Wimbledon where they went with Val’s little daughter without a shadow of a doubt.

Tabloids all over the world published Kilmer’s innocent good-buy kiss momentarily and accompanied it with the headlines about the actor’s new love affair. Elisabeth Shue was refuting the rumors fiercely while Val was smiling meaningfully and made no comments.

Shue and Guggenheim managed to overcome this dark time with dignity. Although the couple was expected to announce the divorce, the wife and the husband stood together. In 1997, their first child Miles was born. In the 2000s, the daughters Stella and Agnes were born. 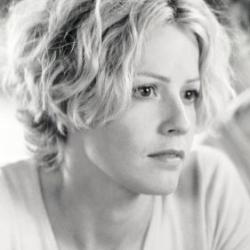