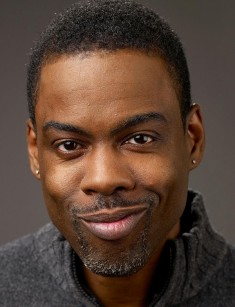 Black skin color still hampers the career development of many talented people. However, Chris Rock managed to reach the top of success and become one of the best comedy actors and artists in the style of stand-up comedy.

The future actor was born in the provincial American town of Andrews in 1965. Soon after the birth of Chris, the family moved to New York and settled in the poor Bedford-Stuyvesant district. Chris's mother Rosalie Rock worked as a teacher and social worker, father Julius was a truck driver and newspaper deliveryman. In 1988, the father died of a stomach ulcer.

The family had five children, and Chris was the second one. Younger brothers Jordan and Anthony work in the entertainment business due to the help of their brother. Sister Tony has the life of a typical American housewife. The elder brother Charles died in 2006, the cause of death was alcoholism.

Rock spent his childhood in criminal New York districts, he studied in schools where most classmates were white people. The parents tried to give children a good education, and Chris admits that he got the main life lesson outside the school. Racism strongly influenced his work, there are many jokes about races and social strata in stand-up shows. Chris often says that he adopted the style of performance from his paternal grandfather, Allen Rock.

In 1985, he began doing stand-up comedy on the stage at the New York club Catha Rising Star. The performance impressed the audience, and the young comedian became known. Chris began to play bit parts.

It is not known, where his creative path went further if at that time Eddie Murphy did not notice him. Enchanted by Chris's talent, he helped the young actor and gave him the role in the movie Beverly Hills Cop 2, and then in I’m Gonna Git You Sucka. In 1990, Chris was invited to the comedy series Saturday Night Live, where he worked for three years.

After that, Chris went for auditions in Hollywood, but he could not qualify and returned to standup. 1996 was one of the most important years in his career. The talented actor became popular, the comedian was awarded two Emmy Awards, later he would get another statuette. The following year, Chris opened his own show, starred a lot and even did voice work for the cartoon Madagascar.

He became very popular as a commentator during the 1996 presidential election. Later, he was offered roles with such frequency that he had to refuse some of them. In 2001, one of the most sentimental and touching films with Chris's participation was released. It was Down to Earth, which is still included in the ratings of the best comedies of our time.

In 2004, Chris got another title. He was named the fifth-greatest stand-up comedian on the Comedy Central. After that, he was invited to host the 77th Academy Awards, and he also hosted the 88th ceremony.

One more interesting project was the series Everybody Hates Chris based on real events, which told about the actor’s childhood. The sincere project quickly gained popularity because such a truth about the lives of young people in criminal New York is not usually shown on TV.

His comedy style is unique. Chris is able to make fun of anything, catch the attention of the most serious spectators. He jokes on both political and racial topics, likes to deride the relationship between a man and a woman.

Because of his easy going and specific behavior, the black comedian not only received love and recognition but often got into ridiculous situations, satirizing famous people. In addition to the standups and roles in the movie, Chris recorded several songs, wrote a book, made his own videos and appeared as an actor in the music videos of Johnny Cash and Red Hot Chili Peppers.

In 1996, Chris Rock married Malaak Compton. The spouse is not engaged in acting or show business, she works as the executive director of the Style Work company, which renders assistance to women who have found themselves in a difficult situation.

There are two daughters in the family. In 2002 they had Lola Simone and in 2004 Zahra Savannah. The eldest daughter is registered in popular social networks. According to the photos, she looks like her father.

In 2006, the US website tmz.com posted news about the couple’s divorce, Rock was extremely outraged by this message. Chris said that he had already lived happy 10 years with Malaak and he was going to live another 40 years.

However, the news turned out to be prophetic. In 2014, the marriage broke up after 19 years. Later, the actor said that the cause of the divorce was unfaithfulness. Besides his wife, he had three more women during these years. The love affair with actress Kerry Washington put the marriage to an end.

Nowadays, Chris is in love with another American actress Megalyn Echikunwoke. The couple does not tell about their private life, they just go together at premieres and entertainment. Comedian’s Instagram is filled with jokes and photographs with fellow celebrities, he occasionally posts selfie photos with Megalyn. Rock says that he tries to control his behavior and to avoid past mistakes. The actor is no longer young, so he wants to find peace and harmony now.

Chris works and plays in films, but he chooses only high-quality projects. For example, in 2016, the Netflix service persuaded Chris to give two stand-up concerts after an eight-year break. He got a fee of 40 million dollars for the show. None of the comedians earned such sums before, but Rock is a top-class guru, who is still adored by viewers. 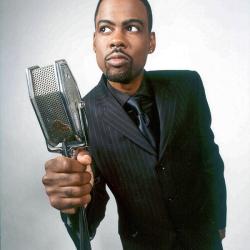