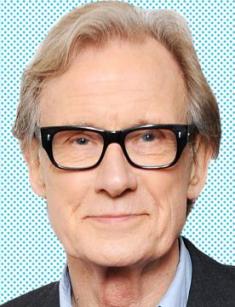 The audience remembered the actor Bill Nighy on the tragicomedy Love Actually. In this movie, a master of disguise appeared in the role of an aging rock musician, who suddenly revised his life priorities on Christmas Eve. After the premiere of the movie, the actor literally woke up famous. To this day, the most outstanding works in the actor's filmography are The Limehouse Golem, Harry Potter and the Deathly Hallows: Part 1, Underworld and Pirates of the Caribbean.

William Francis Nighy (full name of the actor) was born December 12, 1949, in the suburbs of South London, the town of Caterham (Surrey). The actor was the youngest child in the family. He also has brother Martin and sister Anna. The mother of the future actor, Catherine Josephine, worked a psychiatric nurse in a hospital.

His father, Alfred Martin Nighy, worked in the chimney sweeping business. Bill's parents, as believers, raised their children through religious teachings. It is known that in his young years the actor was even a novice in the local parish.

Bill Nighy attended the John Fisher School, where he was a member of the school theater group. However, the actor failed to graduate and obtain a secondary school diploma, as he failed the exams.

Bill's first job was a messenger in Croydon. He tried to change his life as a 16-year-old when he left for Paris. But the bohemian life quickly became boring for the young man, and he returned to his homeland.

When Nighy was young, he first dreamed of becoming a rock musician, then a writer. As a result, he entered the Guildford School of Acting. After graduating, the actor found a job at the Everyman Theatre in Liverpool, where he spent two seasons.

Then the actor moved to London. There, Nighy continued his professional career and participated in several television projects. Among them are Hitler's S.S.: Portrait in Evil, Thirteen at Dinner, the series Boon and Screenplay.

Bill continued to appear in episodic roles in movies and TV shows and even performed on the radio (for example, played Sam in the radio version of The Lord of the Rings). However, Bill was still loyal to the theater.

The most famous theatrical images of the actor were Bernard Nightingale in Arcadia and consultant psychiatrist in the play Blue/Orange (2000) by Joe Penhall. It is known that Bill was awarded the Laurence Olivier Award for this role.

Nighy made his debut on Broadway at the Music Box Theatre in 2006. Then Bill played alongside Julianne Moore in The Vertical Hour, directed by Sam Mendes. Later, the actor, together with Carey Mulligan, participated in another Broadway play called Skylight.

The actor was noticed after a vivid role of Professor Mark Carleton in the mini-series The Men's Room, published in 1991. Then the actor got worldwide recognition only ten years after that. In 2002, director Richard Curtis invited Nighy to star in the romantic comedy Love Actually.

In this movie, Nighy portrayed almost forgotten rock star Billy Mack, who wants to take the last chance with his own redesigned hit and in his sunset years become a worldwide star.

In the movie, which consists of a couple of storylines, the line of Billy Mack and his friend-manager was probably the most touching. Love Actually was released in 2003 and became a hit, and the role of Mack brought the actor the BAFTA Award.

At the same time with Love Actually, Underworld, a mystical horror movie about the war between vampires and werewolves (Lycans), was released. The audience could also see actress Kate Beckinsale on the screen. Nighy played Viktor, the ancestor of the vampires. The bright character appeared in sequels Underworld: Evolution and Underworld: Rise of the Lycans.

In early 2004, the media reported that Bill Nighy was on a short list for the role of the ninth doctor in the revival of the iconic series Doctor Who by BBC. But eventually, producers gave the role to young Christopher Eccleston.

Nighy continued his cooperation with the director, appearing in the role of Philip (protagonist's stepfather) in Edgar Wright's black comedy Shaun of the Dead. He played in the movie Hot Fuzz, the second part of the trilogy Blood and Ice Cream Trilogy, and was a voice actor in the third part of the trilogy, The World's End.

In 2006, the actor starred in Pirates of the Caribbean. Bill portrayed the antagonist, Davy Jones, the former beloved of goddess Calypso (played by Naomie Harris).

It is worth noting that even though the character spoke with a Scottish accent, which is extremely difficult to perceive, and his face was completely hidden behind a computer "makeup," film critics liked Nighy's acting.

In 2007 Bill received the second prestigious award, the Golden Globe Award, for the lead role in 2005 Gideon's Daughter. He played an aging PR man. Later on, he participated in a couple of interesting projects, including the role of the fascist General Friedrich Olbricht in Valkyrie, Quentin in The Boat That Rocked and Victor in Wild Target.

In 2010, was released the seventh part of the movie about Harry Potter (and the first part of the screen version of the seventh book by J.K. Rowling), Harry Potter and the Deathly Hallows: Part 1. In the movie, starring Daniel Radcliffe, Rupert Grint and Emma Watson, Nighy portrayed Minister Rufus Scrimgeour.

It is worth noting that in his youth, as well as in mature years, the actor often played antagonists. Therefore, fans were amazed to see their favorite actor in the image of a quiet, modest pensioner who moved to India and suffering from the tyranny of his wife. This happened in the movie The Best Exotic Marigold Hotel (2011) and The Second Best Exotic Marigold Hotel (2015).

In 2016, the charismatic actor's filmography was expanded with The Limehouse Golem and Their Finest.

Nighy had a 27-year-relationship with English actress Diana Quick, with whom he divorced in 2008.

It is known that in this marriage, the talented actor had a daughter, Mary, who also chose acting as the profession. Bill Nighy has a net worth of $8 million.

In November 2017, the world saw the premiere of a film adaptation of Penelope Fitzgerald's novel The Bookshop. The movie is focused on a story of a widowed Englishwoman named Florence Green, who, following an idealistic dream, opened a bookshop in her native province. Bill starred opposite Michael Fitzgerald, Frances Barber, and Patricia Clarkson.

In late 2018, released the mini-series Ordeal by Innocence, starring Nighy. The plot is based on the novel of the same name by writer Agatha Christie, and Eleanor Tomlinson, Ed Westwick, and Matthew Goode became Nighy's colleagues on the set.

In 2018, Nighy was working on such projects as Payne & Redemption (2020), Four Kids and It, as well as Hope Gap, which is about to be released. It is known that the movie Hope Gap is directed by a screenwriter and director William Nicholson, who once worked on such projects as Gladiator, Les Misérables, Elizabeth: The Golden Age, and Shadowlands.

The plot is focused on a married couple, Grace and Edward, who have been married for 29 years. When their son Jamie arrives for the weekend in their house on the coast, the father tells his son that he is going to divorce. It is the story of three relatives who have to go through all stages, from shock, distrust, anger, and finally the acceptance of the situation.