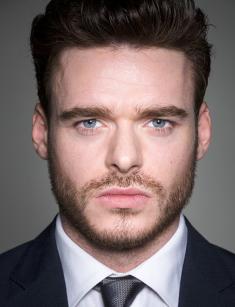 Richard Madden is a talented actor who charms the audience with his emotional and sincere acting. The actor is so convincing in his roles that the characters he portrays seem to be real, and you want to believe and empathize them. The role of Robb Stark in fantasy television series Game of Thrones was the one which brought Richard fame. However, Madden has filmed in many decent projects.

The future actor was born on June 19, 1986, in a Scottish town called Renfrewshire. Richard’s father worked in the local fire brigade, and his mother was a school teacher. In an interview, Madden admitted that he grew up a shy child. For that reason, the boy could not get acquainted with his peers. Then someone advised Richard's parents to send their son to a theater studio to help him overcome his shyness. And that's how Madden first came to the stage.

Soon the boy stopped being shy, and sometime later, when Richard was able to relax on stage, it turned out that he is endowed with acting talent. Both the audience of the local theater and acting teachers noted how easily Madden managed to get into characters. It’s no surprise that soon the boy drew the attention of serious producers.

In 1999, being a 13-year-old teenager, Richard got his first role in a movie. Although it wasn't a lead role, it became a great experience and opportunity for the actor to show his talent in front of the cameras. Since then, the dream of becoming a professional actor settled in the heart of Richard Madden, and the young man began to attend numerous castings and auditions in the hope of a serious role.

Soon, Richard was invited on the set again. The actor got the role in the series for children called Barmy Aunt Boomerang. Madden was playing one of the leading roles for a year, and after the project, he finally decided that playing in the movies and on stage was his calling, and started to study acting professionally.

Richard Madden's choice was the Royal Scottish Academy of Music and Drama, which is located in Glasgow. The aspiring actor dedicated five years to the study but also accepted small roles in theater and filmed in commercials. Besides, Richard joined the troupe of one of the theaters in Glasgow and soon became known among theatergoers.

Critics noted Madden's acting in the play Tom Fool, where the actor got the character of a village simpleton. This play was staged in different cities, and when the troupe went on tour to London, the director of the Globe Theatre noticed Richard Madden.

On the same day, Madden was offered cooperation, but the young man had to reject it due to unfinished studies at the Academy. Richard returned to Glasgow, and soon after graduating, came to the capital back. Madden, already a certified actor, became a part of the team of the Globe Theatre. One of the first Madden’s roles was Romeo in the classic production of William Shakespeare's Romeo and Juliet. Playing this character, Richard Madden won the first fans.

For the next two years, Richard Madden devoted himself to the theater. The young man improved his acting skills and already felt on stage as a professional with impressive experience. However, the dream about the movie career didn’t leave Richard. And in 2009, Madden once again began to storm the auditions and castings. At first, the actor was invited to play minor characters in the series. Then he got a cameo role in the movie Chatroom (among Richard Madden's partners on the set were Hannah Murray, Aaron Johnson, Imogen Poots).

In 2010, the actor's filmography was supplemented with the role in the film Worried About the Boy by Julian Jarrold. This biographical drama is focused on the story of how the legendary Boy George started his creative path, which was appreciated by both the audience and strict critics. Here, Richard Madden got the role of Kirk Brandon, protagonist’s beloved. Such actors as Douglas Booth, Mark Gatiss, Freddie Fox also starred in the film.

Although the name of Richard Madden was already known to film fans, the role of Robb Stark in the cult project Game of Thrones brought him the greatest glory. This could be called the finest hour of Madden: after the premiere of the show a young man woke up famous.

Together with Richard, in series starred Sean Bean, Lena Headey, Peter Dinklage, Emilia Clarke, and other talented actors. Madden's character, according to the writer George Martin, didn’t survive till the end of the saga but was remembered by the audience thanks to the talented play of the actor.

After Game of Thrones, Richard Madden was bombarded with offers of cooperation. In 2012, the project Birdsong by Philip Martin was released. In this war drama, Richard got the role of Captain Weir. A year later, the actor appeared in a touching romantic story called A Promise.

This film tells the story of the young secretary's love for the wife of his old chief. Young people struggle with the surging passion, but love is stronger than their will. Richard Madden here played the role of Friedrich Zeitz. The film also starred Rebecca Hall, Alan Rickman, Shannon Tarbet.

In 2015, Madden starred in Lady Chatterley's Lover and played one of four major roles. His character was Oliver Mellors who became Lady Chatterley's beloved. This love drama is focused on the topic of romance, and more serious issues, such as the rehabilitation of war veterans, as well as morality and its boundaries. Here Richard Madden's colleagues in the filming process were the actors Holliday Grainger, James Norton, Edward Holcroft. The actor's fans loved this film adaptation of the novel by David Lawrence.

Also in 2015, Richard Madden played the role of Prince in Cinderella by Kenneth Branagh, starring Lily James, Cate Blanchett, Helena Bonham Carter, Ben Chaplin. A year later, in 2016, the actor starred in the historical mini-series called Medici: Masters of Florence. This drama is based on real events and tells about the fate of the Royal family and the events of that era.

The series has already won the favor of film critics and rave reviews of the audience. Richard Madden appeared in the lead role of Cosimo di Giovanni de' Medici. The list of actors played in the film also includes Dustin Hoffman, Stuart Martin, Valentina Cervi.

At the same time, in 2016, the actor appeared in the film by James Watkins Bastille Day, and a year later began working on the set of the fantastic series Oasis. Priest Peter Leigh, Richard Madden's character, goes to a planet called Oasis to introduce the word of God to the inhabitants of the planet. However, the local peoples are not as friendly as we would like. And now Peter's task is not only to introduce the Bible to the inhabitants of Oasis but also to survive in hostile conditions. The situation is complicated by the fact that on Earth not everything is smooth, as it turned out, too.

Richard Madden, unlike career success, tries to keep his private life secret. It is known that in 2011 the man began dating the actress Jenna-Louise Coleman, known for playing the TV series Doctor Who.

The photos of the couple and messages about the forthcoming wedding appeared in the press. However, the wedding plans weren’t realized, as the actors broke up in 2016. Perhaps the heart of Richard Madden is still free. The actor doesn’t comment anything on this part of his life.

Now the actor continues to work on new projects and, according to rumors, in 2018 will please fans with new roles.

And now, fans are left to follow the news on Richard Madden’s Instagram, where he periodically posts new photos and shares with fans the planes for the nearest future. 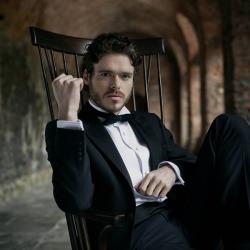