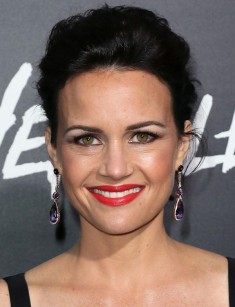 American cinema and theater actress Carla Gugino is known for her numerous roles in adventure films. She moves in a beautiful way, demonstrates bright emotions from horror to fighting rage. The actress’s full filmography has more than fifty full-length films and serials, not including shows and music videos, she is popular and always in demand.

Carla got natural beauty and charm from her ancestors. Her father was of the Italian descent and the mother of the Irish descent. The girl's parents lived in the district center of Sarasota in Florida, USA, but divorced when she was two years old. Carla was born on August 29, 1971, and in 1975 she moved with her mother to California, where she underwent a kidney operation. Her childhood was divided into two parts since.

On the one hand, she and her mother had a bohemian life full of adventures in the west of the USA, in an Indian tipi or van; on the other hand, there was a large father's house with a swimming pool in Sarasota. Carl Gugino was a successful orthodontist. He not only named both children his own name (Carla has a brother Carl) but was also engaged in their upbringing and development. The future actress went on a vacation to Europe and played tennis.

Despite the regular relocations from the Atlantic coast of the USA to the Pacific, the girl studied well and graduated with excellent marks. Carla early thought about choosing a profession and decided to become a model under the influence of her aunt, popular TV anchor, and model Carol Merrill. The girl presented children and teenage clothes, but her small height (165 cm) hampered the development of a modeling career.

Sixteen-year-old Carla moved to Los Angeles on the advice of the experienced aunt Carol, where she attended acting courses. Biography of the model was over, but the life of the actress began. The student, like her friends, went to castings and in 1988 got the first bit part in the cinema. A successful film Troop Beverly Hills brought the young actress fame, she was invited to the television series and full-length films.

In 1993, the audience saw a young actress together with already famous Robert De Niro and the young Leonardo DiCaprio. The drama This Boy’s Life shot by Michael Caton-Jones made Carla popular. She played a dozen roles during the 1990’s, which contributed to her professional promotion, but the role of the fighting mother of two tomboys in the comedy Spy Kids brought her real glory.

The comedy-adventure film, shot by Robert Rodriguez in 2001, was so popular with young and adult viewers that the first part was immediately followed by the second and third ones. Gugino played Ingrid Cortez in all parts. She and her husband Gregorio (Antonio Banderas) bravely overcome difficulties that appear through the fault of quick-witted children.

The work with director Rodriguez so pleased Carla that for the sake of the role in his Sin City, the actress refused to play with Vin Diesel in Adam Shankman’s comic action movie The Pacifier. The neo-noir film Sin City is shot in an unusual black and white color with separate color accents and it was highly appreciated by film critics. The film got the Technical Grand Prize at the Cannes Festival in 2005.

The same year, New York theater critics awarded the actress the Theater World Award. Work in the theater does not distract the film actress from the excellent performance in the movies. She starred in the detective series Karen Sisco as a brave and sexy policeman. The actress appeared in the image of Sally Jupiter (Silk Spectre #1) in Zack Snyder’s fantasy movie Watchmen about the life of superheroes.

But viewers can only hear the actress in Snyder’s blockbuster Man of Steel and Batman v Superman: Dawn of Justice because the ship of aliens speaks in her voice. She cooperated with the director and screenwriter Sebastian Gutierrez in such films as Rise: Blood Hunter, Women in Trouble and Elektra Luxx, Girl Walks Into A Bar and Hotel Noir. Carla appeared in the usual role of a sexy and determined lady in all these films.

In 2015, Brad Peyton's disaster film San Andreas was released, where Carla Gugino played the main character, Emma Gaines, who had to overcome not only a divorce but also an earthquake with a tsunami. The same year Carla’s character was again in a gloomy future in Chad Hodge’s adventure series Wayward Pines.

Shelli Anderson, head of The Staton-House Band tour, had it easier in the comedy-drama Roadies as she at least lived in the real world. The same year 2017, Carla played characters in a fantastic future (The Space Between Us by Peter Chelsom) and in the fantasy world of Stephen King (Gerald's Game by Mike Flanagan).

The personal life of the popular actress is much calmer than the life of her characters and she does not indulge fans with scandals and sensation. Carla Gugino is not officially married, she has no children. In the mid-2000’s, Sebastian Gutierrez became her constant boyfriend, but the couple did not register the relationship. Both partners like to feel that their destinies are not connected by anything except a mutual desire to be together.

Gugino and Gutierrez met on the set of the drama Judas Kiss, where Carla played one of the main roles. Judas Kiss became the debut of the young director and the first joint work of the couple. After becoming a partner of the actress, the director invited his beloved woman in several films.

Carla Gugino adores dark chocolate and massages, she is engaged in yoga, takes vitamins and antioxidants, which help her easily overcome traveling and the change of time zones. She is friends with her colleague Elizabeth Berkley, admires the work of Hong Kong director Wong Kar-wai. She likes to rest having lunch with friends and leisurely talking about life.

In 2018, actress's admirers will see her starring in two films and in a less prominent role in the horror series The Haunting of Hill House directed by Mike Flanagan. Gugino plays Claire, a servant in a mysterious house where terrible events take part, in the thriller Elizabeth Harvest shot by Sebastian Gutierrez by his own script.

Carla's character will also endure many fears in the crime drama Charlie Says, the new work of director Mary Harron, who is famous for the film American Psycho. Horrors pursue Carla only on the screen because the woman is cheerful and active in real life. It can be seen in photos of smiling Carla Gugino on Instagram and Facebook. 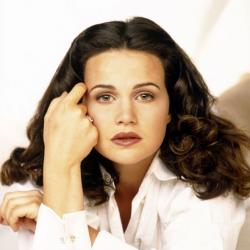