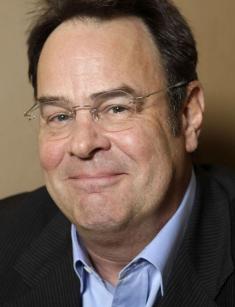 Dan Aykroyd is a Canadian actor, musician, and screenwriter. The performer participated in the television show Saturday Night Live. The audience remembers him as one of The Blues Brothers and as a Ghostbuster from the legendary movie. Today, Dan works as a director and screenwriter.

One of the most famous Ghostbusters was born in Ottawa, Ontario, Canada, on July 1, 1952. The actor's full name is Daniel Edward Aykroyd. His friends always called him Dan. The boy was born with two pathologies. The first is syndactyly or webbed toes. The second was more familiar to others: Dan's eyes are of different colors: one is brown, and the other is green.

No one in the family suspected that Aykroyd would become an actor. His parents were not connected with cinematography in any way. Dan's father was a civil engineer, made a successful career, getting appointed a policy adviser to Canadian Prime Minister Pierre Trudeau. At the same time, his son dreamed of becoming a priest. Over time, this idea went away by itself. The boy became interested in music and show business.

After graduating from school at the University of Carlton, Dan chose a serious field and began to study sociology, political science, and criminology. However, creative nature overtook the young man, and it was not easy to focus on science. Daniel was head over hills with taking part in comedy projects. He realized that he wanted to become an actor, and never received a degree.

Dan was looking for ways to fulfill himself and started working as a DJ on the radio. Then he managed to become a member of the Second City Comedy theater group. Gradually the thoughts of the filming industry began to creep into his head. Among the first works of the actor was the film Love at First Sight, released in 1977.

An essential role in his acting career played an acquaintance with John Belushi. The two people met in Canada. John invited Daniel to the show Saturday Night Live. The participation in the project helped the actor to show his comic talent, enthusiasm, and ability to think "outside the box." As an impersonator, he created performances, getting inspiration from James Carter, Richard Nixon, Rodman Edward Serling, and others.

Many talented comedians worked on the show, but Dan was able to stand out. His colleagues and the audience appreciated his sense of humor. The project brought the performer several Emmy nominations and one win. The show provided Aykroyd with a new experience, led him to success and because of it, he became friends with John Belushi. The performers felt that they were always on the same page. By making a creative duo, they became an example of how to present political satire.

The first success inspired them to create a musical duo. And this is how the Blues Brothers were born. The two friends went on stage in black suits, hats, and sunglasses. They played harmonicas, trying to show everyone that they were the masters of Rhythm & Blues.

What had been originally a funny comedy grew into the work of life for Dan and John. The young people decided to record their debut album. In 1978, the fans of the show received their debut album Briefcase Full of Blues well. It made an absolute splash. The musicians began to perform with concerts and continued to record songs.

At the same time, Dan and John worked in the filming industry. In 1979, Aykroyd and Belushi starred in the film 1941, directed by Steven Spielberg. Dan played Sgt. Frank Tree, who lost his mind in anticipation of the Japanese attack on Los Angeles. The audience in the United States was not fascinated by the movie, but it was nominated for three Oscars.

Realizing that he could make a great actor, Aykroyd suggested filming a full-length film about the Blues Brothers to his band-mate. Belushi liked the idea, and in 1980, the premiere of the movie under the same title, which brought fame to the performers, took place. Aykroyd and John also starred in the dark comedy Neighbors, which was highly appreciated by the audience.

The creative duo ceased to exist in 1980 when John Belushi died of a drug overdose. The musical duo was supposed to perform on the Oscar ceremony, presenting the Best Visual Effects category. The death of the friend was a tragedy in the biography of Dan Aykroyd.

After the death of Belushi, Aykroyd was forced to go into creative search, proving his potential as a solo musician. During this period, Dan was writing the script of the legendary Ghostbusters. The actor's colleagues saw that it was difficult for him to work at that time, and to distract him from the doom-and-gloom thoughts, John Landis offered him a role in the comedy of 1983, Trading Places.

He got the part of a careless company manager, whose life turns around after the administration's suggestion of swapping places with a homeless guy from the street. Dan's partner on set was Eddie Murphy.

The next project in the filmography of the actor was the motion picture Doctor Detroit, and a year later, came out the famous Ghostbusters. It became a cult film. Daniel played Dr. Raymond Stantz, explorer of the paranormal. Bill Murray, Harold Ramis, and Rick Moranis worked together with Aykroyd on the set. The project made stars out of the actors, and the plot of the film formed the basis of the cartoon, numerous games, and quests.

Daniel Aykroyd is a versatile actor, who can demonstrate his talents in different genres. He participated in the filming of the adventure movie Indiana Jones and the Temple of Doom, portrayed one of the characters of the drama film Raiders of the Lost Ark and made the audience laugh their heads off at the plot of the movie Spies Like Us, in which he played together with Chevy Chase.

The comedy film My Stepmother Is an Alien brought Dan the role of the unlucky detective and single father.

In 1989, Aykroyd was nominated for an Oscar in the category Best Supporting Actor for his role in the film Driving Miss Daisy, but the prize went to another actor. The man's career always progressed. He continued to act, even though it was difficult to gain the popularity he used to enjoy when he was younger. Among the films, he worked on were Coneheads, Casper, Sgt. Bilko, Getting Away with Murder and other.

In 1996, Aykroyd starred as "host" in the television series Psi Factor: Chronicles of the Paranormal. He performed dramatic roles in the movies Pearl Harbor and Crossroads, but the comedy genre was the most natural for the actor. Therefore, Aykroyd was involved in the filming of the motion pictures 50 First Dates, I Now Pronounce You Chuck & Larry, Tammy, and others.

Keeping the memory of his friend John Belushi, for some time Dan kept the project The Blue Brothers running, working together with James Belushi. The Essentials, which came out in 2003, turned out to be one of the last albums of the band.

Daniel Aykroyd was married twice. From his first marriage, he has sons with whom he keeps in touch. However, Dan found his happiness only when he met Donna Dixon. They met on the set of Doctor Detroit. The marriage took place in April 1983. Aykroyd's wife, a former actress and model, left her work for her children and husband. The couple had three daughters: Danielle Alexandra, Belle Kingston, and Stella Irene August. In 2019, the couple celebrated the 35th anniversary.

Daniel showed himself as a talented artist and successful businessman. His ideas allowed him to keep a high income on a constant basis. In 2007, he became a co-owner of the company that produced hard liquor and invented the concept of a bottle of Crystal Head vodka, which became a bestseller.

Aykroyd came up with the design of the 50th-anniversary collection released by The Rolling Stones. He placed a bottle in a black chest with the logo of the band and won the hearts of all the fans.

Dan Aykroyd has an estimated net worth of $135 million. Today, the actor's name is often mentioned in the media. The reason for this was the rumors about the possible release of a continuation of the Ghostbusters. After the creation of the sequel in 1989 and the remake in 2016, mass media regularly spread such news, fueling the interest of the audience.

But this time, a promo-clip by Sony appeared on the Internet, which gave hope for the release of the film in 2020. The filming is scheduled for the summer of 2019. It is expected that Dan Aykroyd and Bill Murray will appear as the same characters that they had portrayed in the previous films.