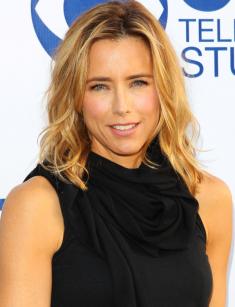 The Hollywood actress Téa Leoni became famous after her participation in the series The Naked Truth, Air Crash Investigation and the films Deep Impact, The Family Man. The artist's marriage with David Duchovny made her more famous, news about the relationship with which regularly shone in the tabloids.

Elizabeth Téa Pantaleoni is familiar to Hollywood film lovers like Téa Leoni, was born in New York City. She was raised in a family with a rich history. Elizabeth's great-grandfather on his father's side was the brother of the famous Italian politician and economist Maffeo Pantaleoni. Her grandma Helenka Pantaleoni and uncle Hank Patterson became famous as actors.

Téa Leoni's parents had nothing to do with cinema and other arts. Her father was a respected lawyer and mother was a well-known nutritionist in New York.

Probably, Téa had genes of the grandmother and the uncle. The girl studied anthropology and psychology after leaving school. But she gave up everything and went to travel in the middle of the learning process. She visited Italy and Japan. And she realized after her return that she was not interested in her old activities. She wanted to go on stage.

In 1988, Téa Leoni passed the audition for one of the roles in the film-the remake Charlie's Angels. The aspiring actress took the job enthusiastically. But the footage was not released for unknown reasons. Téa was very sad at first but she didn't feel sad for a long time. She settled in Los Angeles and soon found a new job.

In the late 1980s, Leoni made her debut as one of the heroines of the cult Santa Barbara. Téa was here not for a long time. She was offered a small role in another cult project, the drama A League of Their Own. The young artist played on the same stage with Tom Hanks, Geena Davis. After the release of this movie, Téa Leoni felt the taste of glory.

The girl was called exclusively for the second role for a long time. She remained in the shadow of the stars. Téa was able to get into the center of the audience's attention after the release of the rating comedy series Flying Blind. It was a breakthrough. Leoni had a lot of offers. She starred in several series that were popular with the audience. First of all, it is Frasier and The X-Files.

In 1995, fans of Téa saw their darling as a presenter of the favorite show. The comedy project The Naked Truth, which was released at this time, brought the actress a new wave of reverence.

The girl appeared in the action movie Bad Boys at the same time. Partners on the set Leoni were Will Smith and Martin Lawrence. And although critics took the film cool, it received two nominations at the MTV Movie Awards. It was the first movie directed by Michael Bay. Unlike critics, the audience liked the movie. In the end, it had a box office success.

The status of a Hollywood star Téa Leoni managed to consolidate after the release of the sci-fi thriller Deep Impact, the comedy Flirting with Disaster and the melodrama The Family Man, where the actress appeared in tandem with Nicolas Cage.

Leoni was awarded the prestigious Saturn Awards for her role of Kate Reynolds in the film The Family Man.

The actress had no less important role in the third part of Jurassic Park.

Then Téa took part in the comedy romance Hollywood Ending of the director Woody Allen. Téa Leoni had great memories of working with the director. Later, she noticed that she would not give up the chance to meet him again on the set.

The best films with the participation of Téa Leoni can be called the drama People I Know and House of D, the comedy films Fun with Dick and Jane and The Smell of Success in the 2000s.

Leoni was lucky to work with Jim Carrey in the film Rogue Trader.

In 2011, the criminal comedy Tower Heist with Eddie Murphy, Ben Stiller was released. It is a story about the manager Josh Kovacs, who decided to restore justice when somebody steals pension savings of a man and his friends. Téa Leoni played an important role, playing the agent Claire Denham.

In recent years, Leoni removed not often. But in 2014, she loudly recalled in the political drama Madam Secretary, where she played the main character. The series was so successful that the creators started the 3rd season of the film in 2016.

Téa Leoni acted as the producer of films in which she worked. They were the movies There's No Fish Food in Heaven and You Kill Me.

The Hollywood star had two marriages. Téa married when she was 29 years old. Leoni's husband was a favorite producer Neil Joseph Tardio, Jr. The couple settled in their own house in New Jersey. But Neil and Téa divorced after four years.

For the first time, the actors met on the sample film in 1992. Then romance arose but David admitted later that Téa Leoni seemed so light and airy that eclipsed the actor, causing hatred. As a result, the girl was taken into the project and the actor was left behind.

Five years later, Duchovny saw Leoni on the cover of the magazine. Téa was so great that he called his agent immediately and asked to find out if there is a beloved man in the life of the actress.

At first, David and Téa talked on the phone because they lived in different cities. Then there was a long-awaited dinner in the restaurant. After that, Duchovny and Leoni started dating

However, they hid their relationship. The press learned about them only when the artists married officially. It was quickly: David proposed to her in nine weeks after he met her.

In the spring of 1999, the happy couple had a girl Madeleine West and they had a son, Kyd Miller in the summer of 2002.

But the married life of the actors was not very happy. During the years of their marriage, Téa and David broke up several times but then they got back together.

On the 10th anniversary of the marriage, Téa Leoni with her husband made a tattoo on the ring finger in honor of the event.

In 2008, the couple announced a divorce but the couple again began to attend events together when Duchovny returned from the clinic, where he was treated for sexual addiction. Then they were able to establish their relationship.

It seemed that nothing marred the life of this couple. But fans of the two stars heard the unexpected news about the divorce of Leoni and Duchovny in the summer of 2014.

Téa is single today. She focuses on work and growing children.

Unlike other Hollywood stars, Leoni is not found on the social network "Instagram." But the woman puts records and a photo on officially verified "Twitter." She draws the attention of subscribers to global problems in other countries: Syria and Bangladesh.

The biography of the actor biography develops. In March 2017, the series Madam Secretary was extended for four seasons. The first series of the new season was released in October 2017. The screening of the multi-part film will continue until May 2018. Téa Leoni has a net worth of $20 million.