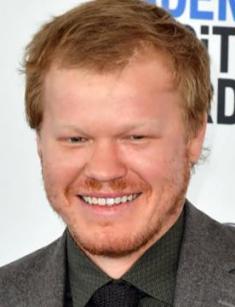 Jesse Plemons is an American movie and television actor. There are many roles in various TV series, as well as works and big movies in his career. But he gained fame after his role in the cult series Breaking Bad, where he played Todd Alquist. The second wave of popularity for the artist was the appearance in the series Fargo in the role of Ed Blumquist. In total, the actor has played over 50 roles in movies and TV series.

Jesse Plemons was born on April 2, 1988, in Dallas, Texas. The boy's childhood took place in the provincial town of Mart. Jesse was the second child to his mother and father, Lisa Beth and Jim Bob Plemons. He has an older sister named Jill.

The boy was brought up in a simple average American family. Jesse's only known relative was his ancestor Stephen F. Austin, known as the Father of Texas. He was the founder of the state of Texas, and the city of Austin was named after him. The actor repeatedly mentioned this in an interview, and he is truly proud of it.

Plemons studied in high school in Mart and was fond of football. In 2007, he graduated from the Texas Tech University Independent School District, where he learned distantly.

Jesse Plemons started acting as a kid. The boy got his first role in the advertising of Coca-Cola. He wasn't even four years old at the time. Mom took her son to auditions, and soon he got his first roles in the movies. His debut was an episodic role in the series Walker, Texas Ranger. After this filming, he began to appear regularly on the set of various films. He starred in Sabrina, the Teenage Witch, Judging Amy, etc.

The movie All the Pretty Horses was released in 2000. Matt Damon played the leading role of the cowboy John Grady Cole in the movie, and Jesse Plemons got the role of Grady in his childhood. Even then, people began to notice their resemblance. And with the years, this resemblance has not disappeared. Some viewers even confused them. And some people were sure that they were brothers. However, lately, Jesse gained weight.

When Plemons turned 18, he was invited to the series Friday Night Lights. In the center of the story is a coach of the Texas football club. Jesse's character, Landry Clarke, is a friend of the protagonist.

Plemons is the central comic part of the series. All the tricks on the set the actor performed himself. Once, when shooting a football scene, Jesse was seriously injured. He had a chin cut, and the guy got 11 stitches.

In 2011, the actor joined the cast of the series Breaking Bad. He appeared and at the end of the fourth season in a secondary role. And in the fifth season, he has already received the regular role of the main antagonist Todd Alquist. Perhaps Jesse's character is the cruelest and terrible character in the series. He is extremely calm and polite but ruthless.

In 2014, it was announced that Jesse Plemons could play a leading role in the movie Star Wars Episode VII (Star Wars: The Force Awakens). Insiders reported that the actor was successfully auditioned. But eventually, the actor did not appear in the "star" saga. John Boyega was approved for the role of Finn.

However, the actor had a lot of offers to take part in the shooting, so there was no time to be upset about it. In 2015, he participated in the shooting of the movie Black Mass. His partner on the set was Johnny Depp.

In the same year, the movie about cyclists called The Program was shown on the screens. The film is based on real events, and Jesse played an American road cyclist Lance Armstrong, a seven-time winner of Tour de France, who was disqualified for life and deprived of all awards in 2012 for using doping.

In 2015, Plemons also starred in Steven Spielberg's Bridge of Spies. The movie was nominated for the Oscar, Golden Globe Award, Saturn Award, and BAFTA. At the end of 2015, the actor joined the series Fargo, in which he played the butcher Ed Blumquist. In 2016, the movie Other People was released, where Jesse got the leading role.

In Fargo, Jesse's wife was played by Kirsten Dunst, whom he soon began dating in real life. The lovers carefully hid their relationship, tried not to get into the camera lenses, and decided to hide their relationship from colleagues on set. As the actor himself said, he fell in love with Kirsten before he even started filming with her. He was not troubled even by their age difference. The woman is six years older than Jesse.

A year later, on the eve of the Golden Globe 2017 Award, it became known that Jesse Plemons Kirsten got engaged. In October 2017, photographs appeared in the network, where fans of the actress noted her spacious outfits and rounded figure.

In January 2018, the actors confirmed that they would soon become parents. Kirsten took part in a photoshoot of the American brand Rodarte, where she openly demonstrated her interesting state.

In addition to being a father for the first time in 2018, Jesse keeps actively acting.

In 2017, the movie American Made starring Jesse Plemons was released, and he was lucky enough to work with Steven Spielberg on the movie The Post. His co-workers in the movie became a three-time Oscar winner Meryl Streep, as well as Tom Hanks, who also became twice the Oscar winner.

In 2018, the movie Game Night starring Jesse Plemons was released.

In 2019, Martin Scorsese's movie called The Irishman is planned to be released. The legendary director intends to gather an indeed star cast for filming: Al Pacino, Robert De Niro, Jesse Plemons, Anna Paquin, and others. The movie tells the story of Frank Sheeran nicknamed "The Irishman," who was responsible for the death of twenty-five gangsters, including the famous Jimmy Hoffa.

Earlier Kirsten Dunst announced her intention to make a movie about a girl whose life got out of control because of mental illness. The actress invited her beloved Jesse Plemons and Dakota Fanning to take part as lead actors. The exact date of the premiere of the movie The Bell Jar has not yet been announced.

Jesse Plemons has a net worth of $3 million.