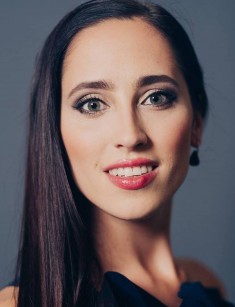 Elina Nechayeva is an Estonian soprano of Russian descent. The singer represents Estonia at the International Eurovision Song Contest 2018 in Lisbon.

Elina was born on November 10, 1991, in Tallinn. Since childhood, the girl has been engaged in music. The future singer grew up in an atmosphere of the music. Her grandmother took Elina to the St Mary's Cathedral’s organ recitals. At the age of four, her mother took the girl to the Rainbow Chorus. By the way, Elina's mother sang in this choir for 10 years.

Despite the fact that Nechayeva’s family used to attend opera recitals, the girl did not take up opera singing at once. She went to sports clubs, attended a video club, where she studied photography and video editing. Nevertheless, music has always been her passion.

Before the age of 14, Elina sang pop music, but one day she heard Verdi's opera La Traviata performed by Anna Netrebko and realized that she would become a soprano. She was mesmerized by the freedom of the opera star’s performance. Her vocal coach was Eda Zahharova. However, Eda presents herself more as a vocal trainer than as a teacher.

Elina can be called a polyglot. The girl knows seven foreign languages such as Estonian, Russian, English, Italian, French, German and Japanese. The singer says that she finds it easy to study languages and she plans to learn three more foreign languages.

While studying at the Music College, the girl started to perform on the stage. She sang at the nightclub, at Estonia Concert Hall. She understood well that opera signing was not very popular, thus, she avoided auditions for musical reality shows.

However, she decided to participate in the Eesti otsib superstaari in 2009. But the jury stated that she was ineligible for the project and she’d better sing opera. Elina responded that she could sing a song of any genre. They told her to sing the single of Black Sabbath which belonged to the heavy metal music. The girl knew neither lyrics nor the tune. But she managed to regain her inner composer, prepare and prove that she could sing any song.

The following year she participated in the International Youth Academic Singing Competition. Elina managed to take the third place and become a laureate of the festival.

Nechayeva also participated in the Tiit Kuusik International Lied Competition and Mart Saar Singing Competition. Elina did not take any prizes. There were no age restrictions in the competitions, and more adult and experienced participants won them. This fact did not upset Nechayeva, but she understood what she should improve and achieve.

In 2013, she participated in Operatsioon VOX. Young opera singers taught acting skills, improved their opera singing, taught the Italian language. She also played a role in Mozart's opera The Impresario, participated in the Estonian music concerts for foreigners.

Since childhood, Elina dreamed of singing with her idols: Anna Netrebko, Dmitri Hvorostovsky, and Elina Garanch. Unfortunately, she could not sing in a duet with the opera legend of Hvorostovsky. The singer died on November 22, 2017. Nevertheless, Nechayeva was lucky enough to meet her idol. She shared photos with Dmitri on Instagram. The cooperation with Anna and Elina, is quite possible, especially after Nechayeva's participation in Eurovision Song Contest 2018.

Elina Nechayeva does not like to tell about her personal life. However, when photos with the Estonian businessman David Pärnamets appeared on the Internet, they had to confirm the love affair. They gave an interview to Delfi magazine. It is noteworthy that David said that this was his first and last interview for the Estonian press.

The man is the head of the Rannamoisa brand which is the largest company for the supply of poultry meat in Estonia. David is 15 years older than Elina, but they don’t care about the age difference. According to the singer, David helps and supports her in everything, he has taken upon himself some preparations for the Eurovision Song Contest.

Elina does not conceal the fact that she realized on the second date that she fell in love with the man. There was an invisible spiritual connection between them. She openly admires David, considers him a gifted and talented person. Pärnamets has sons from the first marriage, and Elina has a wonderful relationship with them. But the couple has no children yet.

Besides signing, the young woman worked as a model, participated in fashion shows. Of course, nowadays Nechayeva completely devotes herself to music. Elina does yoga in her free time, likes roller-skating, and prefers alpine skiing in winter.

The final of the Eesti Laul contest took place in Tallinn on March 3, 2018. The winner will represent the country at the International Eurovision Song Contest. According to the voting, Elina Nechayeva has won.

The singer will perform the song not in English, but in Italian. The single was called "La Forza" which means "Strength". The author of the song is the popular Estonian composer Mihkel Mattisen.

They have composed music for a long time, as a result, there is a compilation of electronic and opera music. The lyrics were written by Elina and her friend and colleague Ksenia Kuchukova.

Bookmakers’ predictions have already appeared on the Internet. According to their rating, Elina Nechayeva has the highest chances of winning. 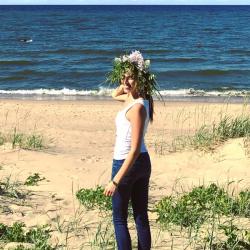