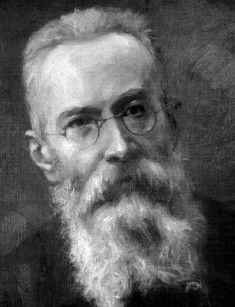 Nikolai Andreyevich Rimsky-Korsakov is a Russian composer, teacher, theorist, conductor, member of the group of composers Moguchaya kuchka ("The Mighty Handful"). He is the author of 15 operas, three symphonies, symphonic music, collections of 100 Russian folk songs and 40 folk songs, as well as 80 Russian Romantic Song.

Nikolai Andreyevich was born in the city of Tikhvin, Novgorod province in the family of hereditary noblemen. The great -grandfather of the future composer was Rear Admiral of the fleet during the reign of Elizabeth Petrovna. His father, Andrei Petrovich Rimsky-Korsakov, bore the title of State Counselor, served as the vice-governor of Novgorod, and as governor of Volhynia for four years. Mother Sofya Vasilievna belonged to the family of the landlord Skaryatin, but she was born as a daughter of a peasant serf.

The family brought up two sons Voin and Nikolai. The eldest son, Voin Andreyevich, later became a naval Rear Admiral. The age difference of 22 years caused that the younger brother was strongly influenced by the authority of the elder one.

Since childhood, Nikolai prepared for the navy service, but his father could play the piano well and he instilled the love of music for his youngest son at the age of six. Initially, Nikolai was fond of liturgical singing and Russian folklore. At the age of nine, the boy composed the first musical composition.

In 1856, the teenager enrolled in the Sea Cadet Corps. After moving to the northern capital, Rimsky-Korsakov plunged into the cultural life of the city and began to visit the opera house. Nikolai got acquainted with the musical works of Gioachino Rossini, Giacomo Meyerbeer, Mikhail Glinka, Ludwig van Beethoven, Amadeus Mozart and Felix Mendelssohn.

The young man began to take cello lessons from teacher Ulikh, then from pianist Feodor Kanille. In 1862 Nikolai Rimsky-Korsakov graduated from the Naval School. The same year, the young man suffered a grievous loss. The father of the future composer died. The mother and elder brother moved to St. Petersburg.

In 1861, Rimsky-Korsakov got acquainted with Mily Balakirev, the founder of the Mighty Handful group. The friendship with the talented musician influenced the development of the creative biography of Nikolai Andreyevich. César Cui and M.P. Mussorgsky also became the members of the group. Later, A.P. Borodin joined the group. The music critic V. Stasov became the ideologist of the Mighty Handful.

Mily Alexeyevich inspired the young composer to create a significant work The First Symphony No. 1, which short scores were created before. By the end of his studying at the Naval School, Nikolai completed three parts of the work and went on a round-the-world voyage on the Almaz clipper. A slow part of the symphony cycle was written six months after the sailing.

Returning three years later to St. Petersburg, Nikolai Alexeyevich plunged into creative work. Soon the premiere of the author’s First Russian symphony took place. It was performed by the orchestra under the baton of Mily Balakirev at a concert of the New Russian School.

Under the influence of the mentor, Rimsky-Korsakov delved into the study of folklore and created musical tableau Sadko, which music was later used in the opera under the same name. The composer's creativity was shown in the use of programming, as well as in the invention of symmetrical fret, which gave the music a fantastic sound.

Rimsky-Korsakov enjoyed experimenting with scales, as the composer himself boasted with a color hearing. The composer perceived the scale of C major in white, D major in yellow. E major was a symbol of the sea element for Nikolai Andreyevich because it associated with shades of blue.

Later, the musician composed the suite "Antar" (Second Symphony Op. 9). The composer began to master opera genre with the creation of orchestrations of the works by Alexander Dargomyzhsky and César Cui. Rimsky-Korsakov’s first opera appeared only in 1872 and it was called the Maid of Pskov. The opera was based on the drama by Lev Mei under the same name. The premiere of the opera took place a year later at the Mariinsky Theatre.

In the early 1870's Nikolai Andreyevich received an invitation from the rector of the St. Petersburg Conservatory and became a professor at this institution, although he did not have a complete musical education. The composer trained a great number of world-famous musicians for 35 years of teaching, such as Anton Arensky, Alexander Glazunov, Mikhail Gnessin, Alexander Gretchaninov, Mikhail Ippolitov-Ivanov, Anatoly Lyadov, Nikolai Myaskovsky, Sergei Prokofiev, Igor Stravinsky.

The composer himself improved his professional skills while teaching the students composition, instrumentation, and orchestration. The musician devoted the first years of teaching to the composing of polyphonic, vocal compositions. He created piano, clarinet, trombone, quintet and sextet concerts for instrumental groups. In 1873, the author’s third symphony (op. 32) was composed.

In 1874 Rimsky-Korsakov started conducting. Six years later, the talented musician already performed with the orchestra in Moscow, at the World Exhibition in Paris, at Concerts populaires in Brussels. In the mid-1870's the composer finished the score of Mikhail Glinka’s operas.

In the 1880’s, Rimsky-Korsakov's symphonic works appeared, and they brought the composer world fame. They include the symphonic suite Scheherazade, Capriccio Espagnol, the Russian Easter Festival Overture, as well as the operas May Night, the Snow Maiden, Mlada.

During these years, Nikolai Andreyevich cooperated with the Court Chapel, led the Belyayev circle, and the Russian Symphony Concerts in St. Petersburg.

The beginning of the 1890’s was marked by the decline of the composer's creative work. At that time, Nikolai Andreyevich wrote philosophical and theoretical works, he created new versions of a number of previous works. The mid-1890’s was a new stage of Rimsky-Korsakov's creative work. He composed the operas The Christmas Eve (1895), Sadko (1896), Mozart and Salieri (1897), The Tsar's Bride (1898).

At the beginning of the 20th century, Rimsky-Korsakov composed the last fairy-tale operas: Kashchey the Deathless (1902), The Legend of the Invisible City of Kitezh and the Maiden Fevroniya (1904), The Golden Cockerel (1907). The orchestral interlude for the opera The Tale of Tsar Saltan (1900) gained popularity, it was called "Flight of the Bumblebee".

The interlude was repeatedly changed for solo performance by string folk instruments, and there were also piano and guitar versions. In the 20th century, arrangements in the style of jazz, rock, heavy metal were created.

Rimsky-Korsakov supported the striking students of the university at the beginning of the revolutionary movement in Russia in 1905. As a result, he was dismissed from the conservatory, but he returned there after a while.

Nikolai Rimsky-Korsakov’s personal life was happy. Being a friend of the senior colleague A.S. Dargomyzhsky, Nikolai paid attention to the pianist, Nadezhda Nikolayevna Purgold, at a creative evening. At that time, the young musician just started work on the opera Maid of Pskov. Nikolai Andreyevich needed an assistant for the instrumentation of several operas, and he offered Nadezhda Nikolayevna this position.

The joint creative work influenced the relations of the young people. They married in 1872. A year later, they had the first son, Mikhail, who later became a zoologist and forest scientist. In 1875, the spouse gave birth to a daughter, Sophia, who became an opera singer.

Three years later a son, Andrei, was born. He later mastered the profession of a musicologist, became Doctor of Philosophy. Vladimir, the youngest son of Rimsky-Korsakov, born in 1882, worked as a viola player in the Mariinsky Theatre Orchestra. In 1884, the youngest daughter, Nadezhda, was born. The couple had two more children, Svyatoslav and Mary, who died in infancy.

Nikolai Andreyevich’s wife died of smallpox 11 years after the death of her husband. The apartment on Zagorodny Prospect in St. Petersburg, where Rimsky-Korsakov lived over the last years, was given to city visitors after the revolution. Only in 1971, the museum of the composer was established there, and the atmosphere of Nikolai Andreyevich's life was restored. The apartment houses manuscripts of famous operas and photos from the family archive of the musician.

The composer died of a heart attack on June 8, 1908, when he found out the news that the opera The Golden Cockerel was banned. At that time, Nikolai Andreyevich was in his Lubensk country estate.

The grave of the musician was originally located in St. Petersburg at the Novodevichy Cemetery, then the remains were reburied in the Masters of Arts Necropolis of the Alexander Nevsky Lavra. 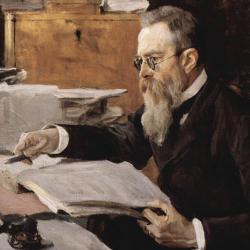